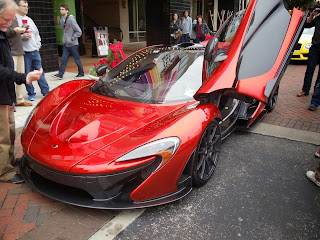 McLaren set the standard for performance vehicles with the McLaren F1 in the 1990s with a top speed of 240 mph. It was the first hypercar. Now, McLaren has produced a plug-in hybrid supercar. At the 2012 Paris Motor Show, McLaren debuted the pre-production concept of the P1. McLaren unveiled the production version of the F1 at the 2013 Geneva Motor Show. 375 P1s would be made with production starting in October 2013. The McLaren P1 is a rear-mid engine, rear-wheel drive two-door supercar powered by a hybrid drivetrain.

I have seen the P1 at a few car events in the greater Houston area. The P1 does not look like anything on the road. It has a more aggressive look than the McLaren MP4-12C. Like its predecessors, it does have the scissor doors. It also has retractable rear spoiler. The P1 has a very aggressive exterior and an interior that is a big improvement over the MP4-12C. But the selling point of the P1 is its drivetrain and performance.

The P1 has been featured on Top Gear, where it was compared to the Porsche 918 and the LaFerrari. It has also made a stop at Jay Leno’s Garage. It has also been featured in the Need For Speed, Fifth Gear, and Motorweek. The P1 is playable in Need More Speed, Driveclub, Forza Motorsport 5, Project CARS, Forza Horizon 2, Grid: Autosport, Race Team Manager, Forza Horizon 2 Presents Fast and Furious, Need For Speed: Rivals, Real Racing 3, Asphalt 8: Airborne, Assetto Corsa, Asphalt Nitro, and CSR Racing.

Final Thoughts; Electric cars have the Tesla Roadster and Tesla Model S to set the standard for what an electric car can do. Hybrids had the Toyota Prius as its standard, which got impressive gas mileage at the cost of excitement. It is great to see McLaren make a hybrid, one that is has styling and performance. McLaren pushed the performance limits with the F1 and now McLaren pushes the limits of what one can do with a hybrid drivetrain.

Photo was taken by a digital camera.