A Look at Disney Opens The Toy Box: Toy Story 2 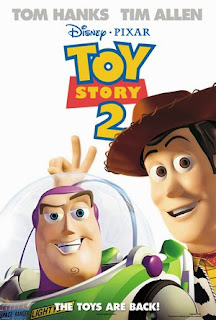 Hello & welcome back to A Look at Disney Opens The Toy Box. And the toys are back in town as we look at Toy Story 2. Â  I gotta be honest here and say that not only is this one of my favorite Pixar movies, it’s my favorite film in the Toy Story trilogy. With that out of the way, let’s begin.
Â
Trailer
Â
Â
Â
Â

I think this trailer sums up why I love Toy Story 2 so much, it promises you a fun time and it delivers on that promise while also remembering the heart of the characters.
The Plot
We open on a cinematic sequence that doesn’t look dissimilar from something of that from the Buzz Lightyear TV show, just on a bigger scale.

But alas Buzz dies right as he goes to get a battery. Â But no fear, it was just a video game that Rex was playing. 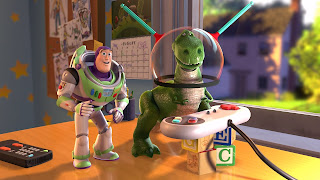 We see after this that while playing with Woody and Buzz, Andy rips Woody’s arm and can’t take him to cowboy camp. Â And here, Woody is shelved where he finds another toy that had been broken, Wheezy. Â And it may be too late as Mrs. Davis takes Wheezy out to be sold in a yard sale and Woody risks his life to save him but he is at risk of being taken by an obsessive toy collector, Al. Â But Mrs. Davis will not let him have Woody as he’s a family heirloom. 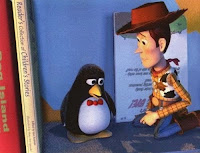 But this doesn’t stop Al as he steals Woody and this leaves the other toys to figure out who stole their cowboy friend. Â Buzz puts in a daring effort to save his friend but it’s no match. Â They take some time but they soon figure out who took their friend, when Buzz hears the word toy and tells Etch to draw the chicken man. They soon discover that they must head to Al’s Toy Barn. 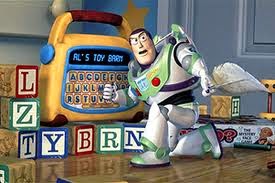 Which you may recall was mentioned in the Buzz Lightyear in the commercial in Â the first Toy Story. Â So, the toys including Buzz, Rex, Slinky, & Potato Head set Â out on a daring mission to bring Woody home. Meanwhile, Woody is greeted by Â the Roundup gang. Â And we learn that Woody is a collector’s item as he is based on a long forgotten children’s Â show, Woody’s Roundup.
I love that display, Â  it Â just gets across in one moment that Â Al was really a big fan of this show. Â Apparently, Â Al has such a big collection of Woody’s Roundup stuff because his parents wouldn’t let him play with these kind of toys as a kid. Â  We soon learn that Al intends to sell the Roundup gang to a toy museum in Japan but Woody has no interest in going to Japan because he doesn’t wish to abandon Andy. Â  But the museum will not take The Roundup gang, if Woody is not included. Â Sometime later, Al accidentally rips Woody’s arm and that night, Woody tries to get it back but to no avail. So, Al has to call in a toy doctor to fix up Woody. Â  And he is just as good as new and through the saddest montage in Toy Story 2, we learn of Jessie’s past. 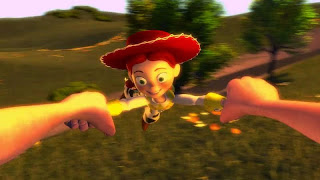 The Prospector warns Woody that he could face the same fate as Jessie and here, Woody decides to stay and go to the museum with the Roundup Gang. Â  Â Meanwhile, Â the other toys arrive at Al’s Toy Barn and Buzz tells the toys to split up and here, we get some great moments such as Buzz going down the Buzz aisle trying to get a belt off another Buzz and also the Barbie aisle. 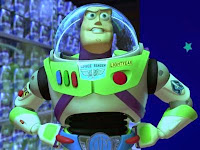 The other Buzz Â tries lock Andy’s Buzz in the aisle thinking that he’s a real Buzz and takes his place. Â Here we go again…. Â  Â The Other Buzz Â teams up with Andy’s toys now thinking that he is rescuing a hostage from Evil Emperor Zurg. Oh boy… Â  Â  Â  Andy’s Â Buzz is able to escape but on the way out, Â he accidentally frees a Zurg toy. Â  Â On the way to save Woody, we get Â some funny moments such as Rex using his head. 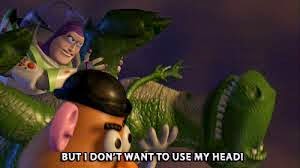 And Andy’s Buzz soon makes it to the apartment and reminds Woody that he is a toy but Woody won’t hear it and stays behind with The Roundup Gang but he soon has a change of heart but it’s too late as Stinky Pete closes up the vent. Â Because, he has waited too long for his plans to go down the gutters now. Â The rest of Andy’s toys resume their rescue mission by taking a Pizza Planet truck to the airport, where The Roundup Gang is heading. 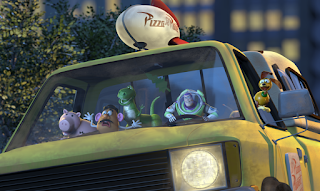 At the airport, the toys find Woody and Bullseye but it takes some time to find Jessie but Stinky Pete has other plans as a rather awesome battle ensues as he rips Woody but Woody is saved as his friends flash him with cameras from a suitcase while on the luggage conveyor. After defeating Stinky Pete, Â Woody lives his finest hour as he saves Jessie while riding on Bullseye. 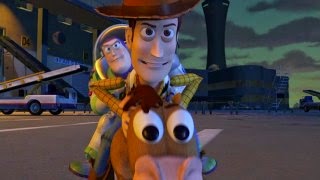 At Andy’s Â house, Â  Jessie and Bullseye are adopted as a part of the family. 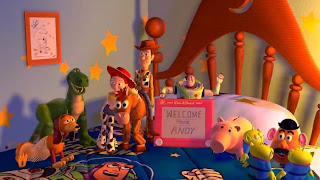 And it ends with a reprise of You’ve Got A Friend In Me sung by Wheezy, who had been fixed. Shame he was sold during the time between this and 3. Â  Â I love this movie, this is my favorite movie in the trilogy. Everything about this movie just works so well.
Â
Characters
Main Character
Woody voiced by Tom Hanks 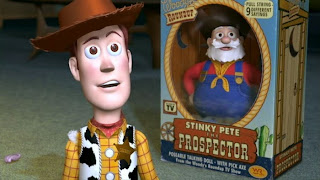 While the first movie was about Buzz was accepting that he’s a toy. Â This movie is about Woody realizing that while he may not have much time left with Andy, he needs to cherish the time that he has. Â And this puts him in a predicament because while he loves Andy, he knows that he doesn’t have much time left.
Supporting Characters
Jessie voiced by Joan Cusack 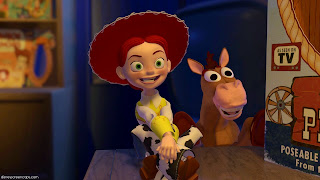 While Jessie may have had a sad back story, that isn’t all there is to her character. She has a fun attitude and is up for an adventure but at the same time, isn’t afraid to show emotion.
Bullseye voiced by Â Frank Welker 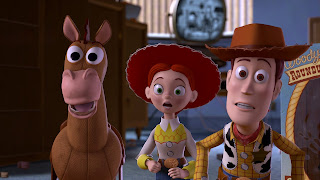 Bullseye is such a sweet character, though he does fall into the trope of animal characters acting like dogs, even when they aren’t dogs but even then Bullseye is such a fun character that I am able to overlook that.
Buzz Lightyear voiced by Tim Allen 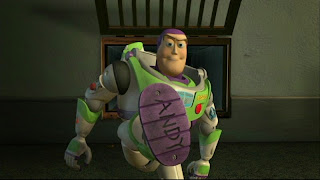 Buzz had to step up in this film and take role of leader and in that regard, he worked so well as you can see how much he has grown since the first movie and he wasn’t going to stop at anything to complete his mission.
Potato Head, Rex, Slinky Dog, & Hamm voiced by Don Rickles, Wallace Shawn, Jim Varney, Â & John Ratzenberger 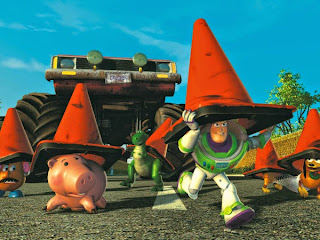 I feel like in 2, you finally get a sense as what lengths these characters would go to for one another. Â I mean this scene conveys that quite well. Â Though, when you look at Â this scene, Â it is clear that they took the Pizza Planet scene of Buzz and Woody sneaking in and up the anti. Â  Tangent aside, Â  these toys are so loyal to one another that they are willing to risk their lives and that’s what a family does.
Other Buzz also voiced by Tim Allen 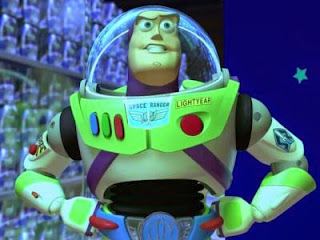 Have you noticed that something always happens to Buzz in all three movies? In the first one, he thought he was a real space ranger. In 2, he was locked up in Al’s Toy Barn by Other Buzz, who also thought that and then in 3, he was reprogrammed into his demo mode and then his Spanish mode. Â  I have to wonder what it was like for Tim Allen to play both sides of Buzz here as he had to play Andy’s Buzz, who knew what he was and this Other Buzz, who just like in the first movie, thought he was a real space ranger. That couldn’t have been easy.
Emperor Zurg voiced by Andrew Stanton 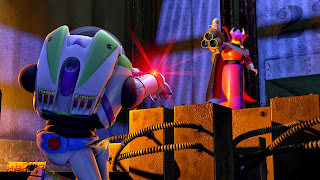 Zurg was a fun character but other than being a parody of Darth Vader, he didn’t really add much to the story.
Music
Woody’s Roundup
As I said last week, this is a fun theme song that evokes the feeling of an actual TV show. Â And while it’s not my favorite song from the Toy Story trilogy, it is still quite good and a very fun song.
When She Loved Me
Yeah, this is my favorite song from the trilogy. Â  It does all the right things to tug on the heartstrings and makes you feel for a toy. Â And you just want to give Jessie, a big old hug and tell her that everything will be okay.
You’ve Got A Friend In Me (Woody’s Version)
This is my favorite version of You’ve Got A Friend In Me. Â Because again, Â it has the most weight to it and comes at the right time, when Woody needs to hear it. Â  The way it is sung by Tom Hanks really makes you feel for Woody here.
You’ve Got A Friend In Me (Wheezy’s Version)
No disrespect to Robert Goulet but this version isn’t for me. Â It’s not bad but I Â could take it or leave it. Â It’s fun but I find it along with the Spanish version from Toy Story 3 to be one of the lesser versions of this song.
Villains
Al voiced by Wayne Knight 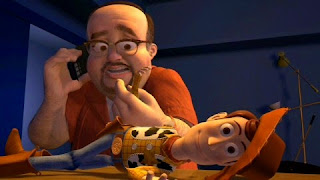 Al in unique in that sure he does bad things but you have to wonder what drove him here as Â you see from his collection that he is avid collector and takes good care of the stuff in his possession. He’s not a bad character but compared to other main villain, he does Â things that are understandable, if you are a fan of something but he just goes about it in the wrong way.
Stinky Pete voiced by Kelsey Grammar 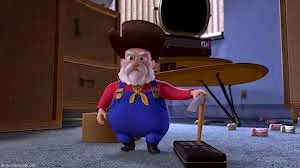 Stinky Pete is the first truly evil villain that we get in this franchise and you see that as his resentment and bitterness had built up in him over the years and he has a plan and he is not going to let anyone stop him. Even if that means putting on a false mask and hiding his true self.
My Final Thoughts
I love this movie. Â This is one of my favorite animated movies of all time and Â easily one of my favorite Pixar movies. Â Everything about it, just comes together so well to deliver such a good time. Â Join me tomorrow as we look at more songs from…
Woody’s Roundup 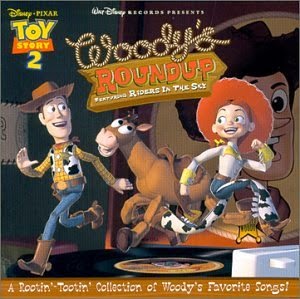