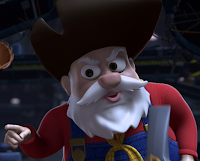 Hello & welcome back to A Look at Disney Opens The Toy Box and our second of the three Villains Profiles. Â Let me make something clear, while there are two villains in Toy Story 2, I will not be doing a Villains Profile for Al because while he is important, Â I’d rather focus on the characters that I consider to truly be the main antagonists and in the case of Toy Story 2, that’s Stinky Pete. As always, this’ll include Voice Actor, Â Entrance, Personality, Grand Desire, Most Evil Deed, Demise, & finally, Is Stinky Pete A Good Villain? With that outta the way, let’s begin. 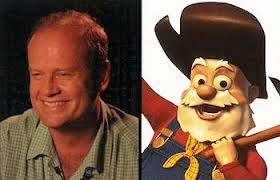 Kelsey Grammar, who’s perhaps best known for playing Frasier Crane but he has played other villains before and here with Stinky Pete, he deceives you as you first buy him as a caring old timer and you buy into that until the big reveal comes, when he steps out of his box and you see that it was an act. A ruse as the facade is dropped. And you even hear that as his true nature is revealed as Grammar changes the way, he voices The Prospector.

We first meet Stinky Pete at Al’s apartment as we are introduced to the rest of The Roundup Gang and we learn that he’s in mint condition as he’s never been out of the box. 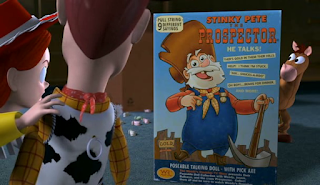 Again, you are lured into believing that he’s a caring old soul only looking out for the best interest of his friends. But as we will learn as the film goes on, that is not the case at all!

As mentioned above, he starts out as a seemingly caring old man but as time goes one, it is revealed that he’s jaded and cynical. Â His hatred of space toys overtook him such as we saw, when he referred to Buzz as Buzz Lightweight. Â Because as soon as the rocket ships went up, kids stopped caring about cowboys. Â And he just wanted to feel love of children and his thought was at by being displayed on the museum in Japan. Â His bitterness of spending his entire life on a dime store shelf also plays a big factor into what made him so angry. Â We aren’t given too much detail about his past but we are given just enough to understand what made him snap. Â Something to consider with Pete is feelings towards children. Â He believes that children only destroy toys and don’t love them. Â This is similar to Lots-O’s philosophy from Toy Story 3 as he felt that no child truly ever loved a toy but we will get into that more, next week.

My thoughts are here as Woody put it, Â Stinky Pete never knew the true meaning of playtime and I think that Pete spending all of his life on either a store shelf or in a display case made form this view of children. Â Seeing as he never knew the love of a child, Â he resented them. Â  I can almost picture kids back in the time during Woody’s Roundup’s popularity going gaga over getting Woody, Jessie Â & Bullseye but not wanting Stinky Pete because he’s not one of the main characters or one of the cool characters like Woody or Jessie. Â And while it is never stated in the film itself, Â  I do have to think that Stinky Pete resented that he was portrayed as a buffoon on the TV show especially considering that this Stinky Pete is rather intelligent.

I feel out of the big 3 Toy Story villains, Â Stinky Pete is the only one that has a desire. Â  Which is getting to the Konishi Toy Museum in Tokyo. Â  Which you can somewhat understand as he felt that if were there, children would come from around the world to view and admire him but they’d only take Â the set, if Woody was included. Â Does anyone find it funny that while The Prospector was bitter from spending a good portion of his life on a store shelf, his end goal involved him being placed on a shelf or in a display case.

I gotta be honest, Â I had a tough time here. I could either go with him locking the vent after Buzz and the gang left. 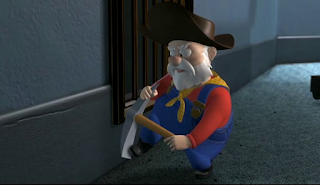 But I think Â I had off to go with Pete turning on Al’s TV, the night before the toys came to sabotage Woody’s escape and allowing Jessie to take the blame. Â This shows his determination in what he wanted and at what lengths he would go to get it.

After a pretty intense battle at the airport on the Luggage Carrier, Â Stinky Pete Â is placed in a Barbie backpack of a young girl named Amy, who loves to paint on her toys. 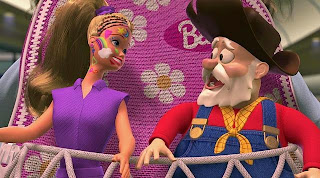 And Â you can just see the horror on his face. Â Though apparently, he comes to like Amy. Â As you see after Toy Story 2 came out, there were interviews with the characters.

After Toy Story 2 was released, there were interviews with all the characters on the website, including Stinky Pete, who stated that he had grown accustomed to having Amy decorate him, and he liked it, having reformed with a change of heart.

It does not appear that this has been uploaded online but I like this thought. And it is a nice end for The Prospector.

Is Stinky Pete A Good Villain?

Overall, yes he is. Â He’s one of my favorite villains from Pixar and perhaps, my favorite Toy Story villain. Â You understand his cynicism and jealously quite well. Â In many ways, he’s a parallel to Woody in the first movie and shows what Woody could’ve become if he had let his jealously of Buzz overtake him. This is a contrast that was in my opinion, very important to highlight how Woody had grown as a character since the first movie. Â And in that respect, Â he works very well as a villain. 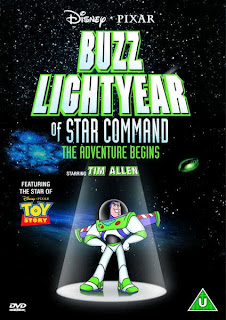