When we think of a dark time in Disney history we think of the years of 2000-2006. With very few exceptions the product that Disney was turning out was utter crap. In a time of schlock and sequels the only saving graces were Lilo and Stitch, Pirates and Kingdom Hearts. While that was a dark time there was another dark period of Disney. While not as shameful and horrible as the modern one it was still underwhelming. After the death of Walt Disney in 1966 the quality of the animated film went down tremendously. The company was going through major change such as staying afloat without the visionary founder as well as passing the torch to a new generation of animators and filmmakers. While the films were still serviceable they were nowhere near the standards of the beloved classics. They just didnâ€™t have the same charm or magic. The magic wouldnâ€™t truly return until the Little Mermaid in 1989. With that being said, there was a Disney film that I found to be very good and different and is probably the most underrated Disney film of all. That film is the Rescuers based on the books by Margery Sharp.

The Rescuers tells the story of a group of mice called the Rescue Aid Society and their mission is to save people from hazardous situations usually kidnapping. One of the Societyâ€™s top agents Miss Bianca volunteers to be assigned to the case of a kidnapped girl named Penny, who is being held captive in a place called Devilâ€™s Bayou and just barely managed to send out a message in a bottle. Bianca chooses the janitor of the RAS named Bernard to be her partner on the mission. Together they embark on a journey to well, rescue Penny from her captors Madame Medusa and her accomplice Snoops. The villains are using Penny to retrieve a lost diamond called the Devilâ€™s Eye that used to belong to pirates and is now hidden in a cave, but the caves are too small for an adult so Madame Medusa is using Penny to get it and they chose her because nobody would care if an orphan went missing. Bernard and Bianca do what they can to not only get Penny out, but to also foil Medusaâ€™s plans with the assistance of the animal residents of the bayou. The story is very straightforward, but very effective. And despite having an easily telegraphed theme of great things can be accomplished by the smallest of the small it is still an entertaining film. A lot of what makes the movie work is its simplicity, charm, subtlety and how our two leads Bernard and Bianca work well together and form a relationship beyond just being partners. 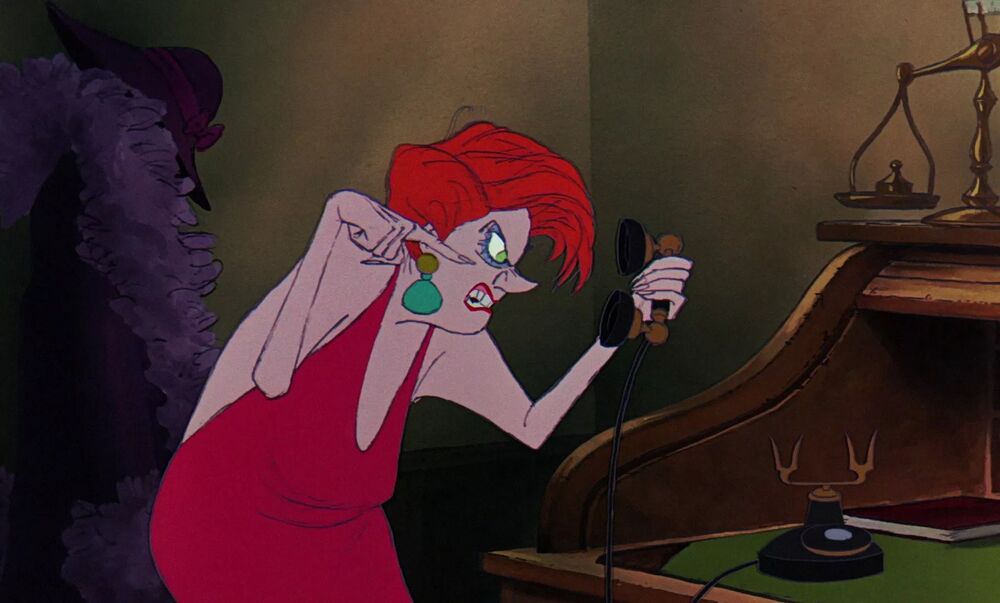 Madame Medusa is a serviceable villain for the film. Yes, at the end of the day sheâ€™s just a greedy person, but thatâ€™s not all she is. What Madame Medusa has that other villains like Radcliffe or Clayton donâ€™t have is that she kidnapped a child and has a very negative emotional impact on that child. She is cruel to Penny and brutally assaults her self-esteem. She gets a relatively satisfying come-uppance of being stranded in the middle of a bayou surrounded by her pets that have turned on her.

Snoops is a serviceable henchman that is a competent enough physical threat to keep Penny in line and with the assistance of the environment keeps Penny from leaving. He also plays the bumbling henchman quite well, cowering at Medusaâ€™s temper and following her orders. 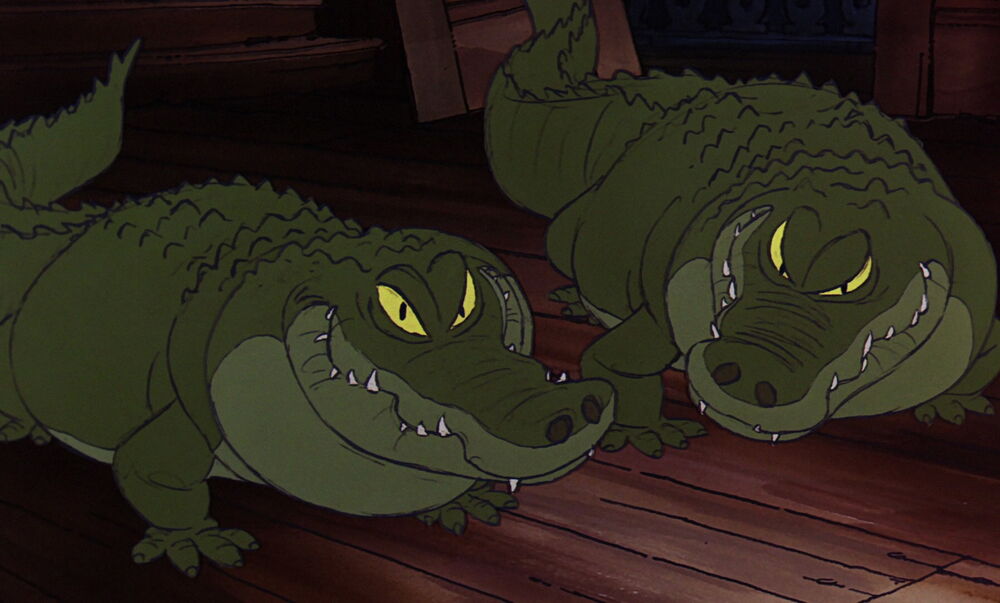 Brutus and Nero are two alligators that are the animal henchman to Madame Medusa and are the actual threats of the film that can actually kill our heroes and even Penny. They are the bite to Snoopsâ€™s and Medusaâ€™s bark. Without any dialogue the animation by Frank Thomas wonderfully conveys everything these two are thinking and are quite expressive and actually show teamwork in trying to catch their prey. Expressed wonderfully in a scene where they attempt to catch Bernard and Bianca hiding in an organ. The scene is very tense and makes Jaq and Gus’s encounters with Lucifer seem like a picnic.

https://youtu.be/XpP8bNxVdyUÂ (sorry links are being stupid) 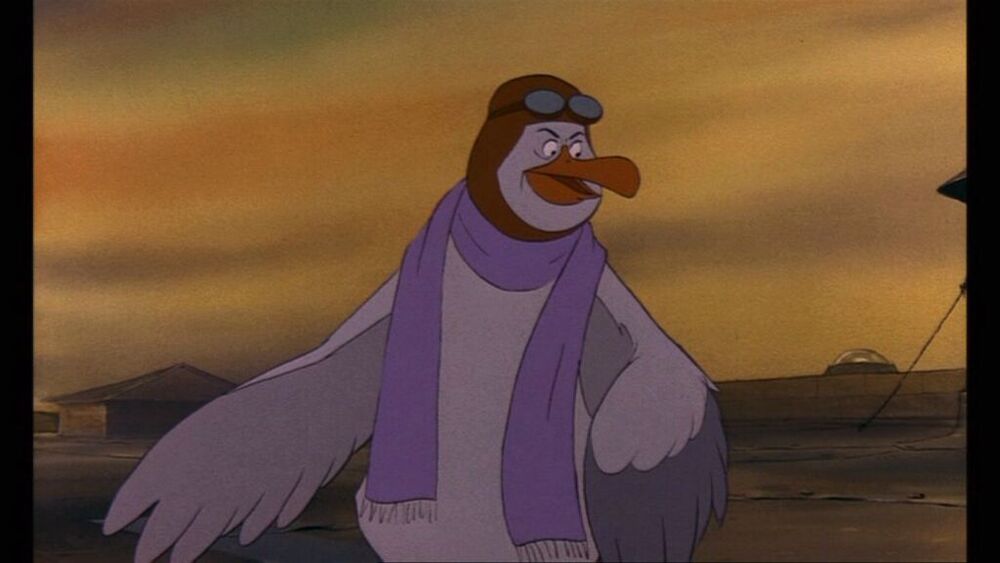 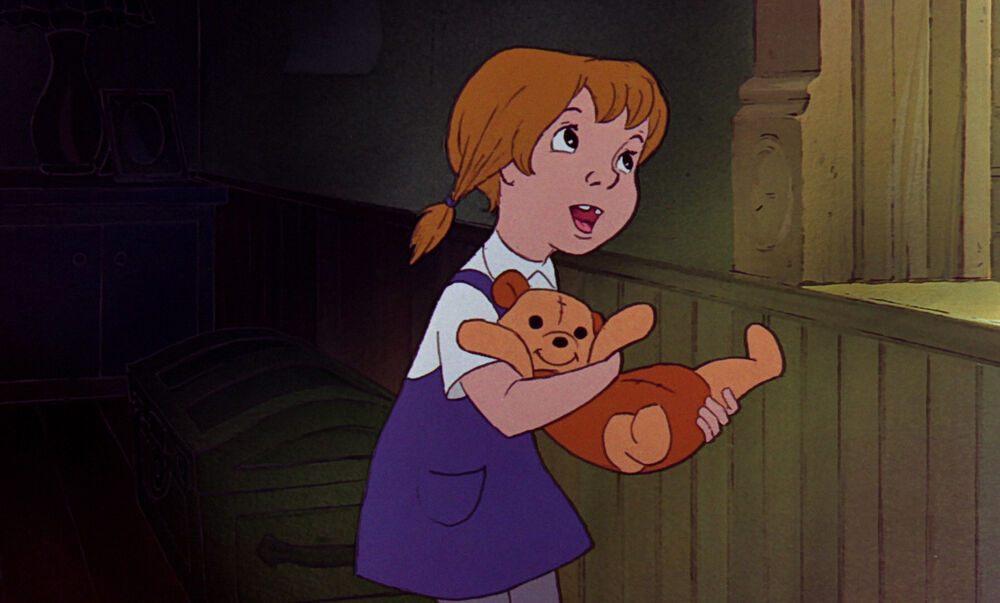 The interesting thing about Penny is that Penny is allowed to be a more relatable child (something I found missing from Down Underâ€™s Cody) in that Penny is affected by what her captors say and do to her. Penny puts on a brave strong face in their presence (donâ€™t let them see you cry) and when theyâ€™re not looking she is as hurt as any of us would be at that age. Sheâ€™s allowed to have a range of emotion and distress as any of us would be in that situation. All she wants is to be loved, to have a family. If there is one thing to complain about itâ€™s that this kid is 7-10 years old. So I really donâ€™t buy that she would agree to go into the caves when her TEDDY BEAR is taken hostage. Itâ€™s a teddy bear thereâ€™s no way sheâ€™s that young to believe her bear is real. That is very distracting. 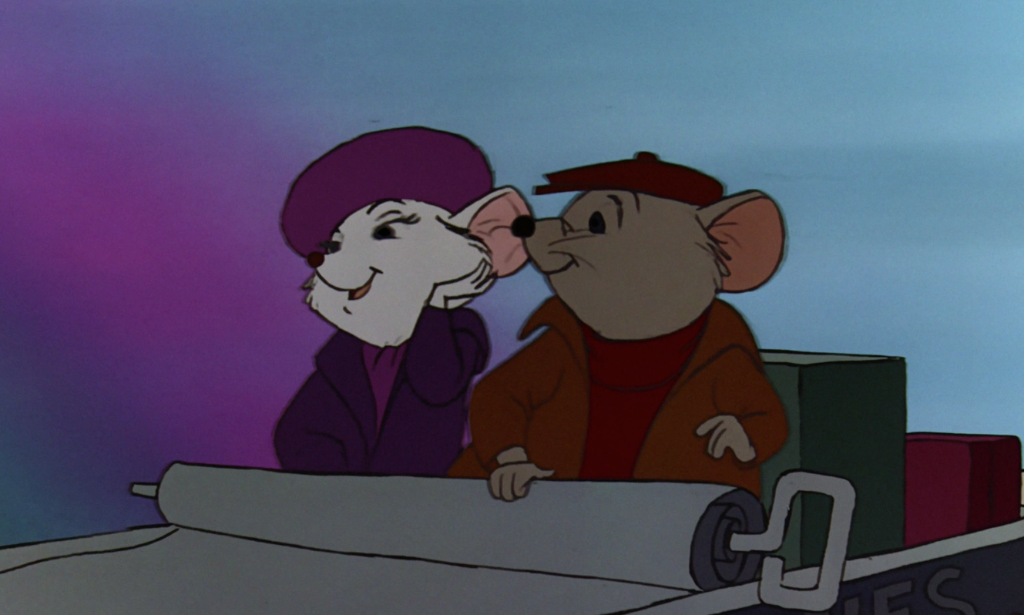 Our leads for the film are just wonderful. The chemistry between Bob Newhart and Eva Gabor is very strong and they work very well together (even though they probably werenâ€™t even in the same room while recording). Bernard is a cautious, introverted and superstitious along with awkwardness while Bianca is elegant, refined, driven and confident. These two characters have completely different personalities and they compliment each other in the rescue a perfect combination of cautious and confident. Also special credit needs to go to the film for having these two form a bond and emotionally connect through the animation with no dialogue. The looks they give each other, the looks of surprise and joy go a long way in getting us engaged with these characters than dialogue ever could.

While this film is not a musical there are still plenty of songs that show a very different tone than one might expect. The music is quite under stated in comparison to the past, but they work.

This introductory song is perfect for setting a more somber stylized tone that fits Pennyâ€™s situation. That sadness and yet that hope that someone will come and help is a very powerful part of the song and is a great way to begin the film.

This is a simple little song that is essentially the mission statement of the Rescue Aid Society. Itâ€™s an oath that our heroes come back to whenever they have doubts or reservations about their daunting task.

This is the other candidate for my favorite song in the film. This is a song that like the previous one accompanies a beautiful scene and moment and it highlights Pennyâ€™s sadness, but also a promise of hope for Penny. Yes, sheâ€™s hurt, but someone out there does care and she will have a family one day!

The animation is very interesting to talk about because it requires a little background info. When 101 Dalmatians was in production Ub Iwerks created a Xerox camera that transferred the animatorsâ€™ work directly onto the cells eliminating the need for the inkers. Unfortunately by eliminating the hand inkers the clean up process where the sketchy lines done by the animators were cleaned up didnâ€™t happen. So the animation looked like moving sketches with color. This process was cheap and efficient, but the quality and smoothness of the animation suffered. By the time the Rescuers was in production the process was improved where the Xeroxed sketchy lines could be printed in different colors disguising them from the eye. The colors that were newly available were purple and a grayish tone which is why the color palette of the film is much darker than you would expect. This dark color palette worked for the filmâ€™s story as well as the technical aspects of the production. As stated before the tone of the film defies expectation. The tone of the film is much more somber and more legit. Think films like Dumbo, Bambi and Lady and the Tramp. This is at odds with your typical mouse movie with bright colors and cute mugging to the camera (Iâ€™m looking at you Stuart Little). I find it fascinating how the Rescuers was a return to the more dramatic, subtle, and serious films that Disney used to do relatively often. Itâ€™s a great film to go back to and compare to the animated films of today. I miss these types of films and I wish they would make a comeback. Another interesting fact of note is that this film was the beginning of a true collaboration between the old guard of animators and the new generation that would be responsible for the Animation Renaissance. For any Disney fan the credits is a whoâ€™s who of masters and then future masters of animation. Names from Wolfgang Reitherman, Frank Thomas, Ollie Johnston, and John Lounsbery to Ron Clements, Glen Keane, and even Don Bluth worked on this as a head animator!

The Rescuers is a wonderful, charming, subtle, mature film that tells a simple story very well. It has meaningful characters with many quiet and beautiful moments that convey so much with so little. Audiences agreed with me seeing as it was the most successful Disney animated film at that time (1977) and was the first substantially successful film since the Jungle Book and wouldnâ€™t be surpassed until the Little Mermaid. The Rescuers is a gem of Disneyâ€™s more forgettable period that should be noticed a little bit more.