A Look at Disney: Can We Talk about The Descendants Trailer Hello & welcome back to Â A Look at Disney. Â Well, I’ve been dreading this thing for some time now. Â Let’s get this outta the way.
Okay, after watching that. It’s not as bad as I had feared but this movie still seems really dumb. Â For one thing the costumes of the villains look like bad cosplay.

What is she doing here? Â And also this just looks bad. As in the designs look so generic. Â All this looks like is another generic Disney Channel movie that just happens to be about the children of Disney villains. Â I suppose that’s a new hook Â but it just looks so bland. Â And I’m sorry even as a Once Upon A Time fan, I’m having a hard time accepting how this movie would work. Odd considering that the main crutch of the second half of season 4 has been about Maleficent reuniting with her daughter. Â But at least there, they explain that. Â My biggest issue that is this movie looks so tacky. Â The only thing that seems remotely funny is that Carlos, Cruella’s son is afraid of dogs. That’s a little funny but other then that, Â this just feels like any other generic high school movie.

You guys had an interesting premise here with what would happen if the Disney villains had kids. Â But instead you turn it into a high school movie. Â This is giving me Equestira Girls flashbacks in how that movie took the ponies out o Equestira, made them human and set them in a high school. Â Granted, I still liked that movie but I do think that a movie set in Equestira would have been more interesting and the location they show at the beginning of this trailer, The Isle of The Lost looks like it could be more interesting than the Prep School setting, which will most likely be the main location for this movie. Â I know my feelings have been negative towards this movie since the first announcement but well look at this…. 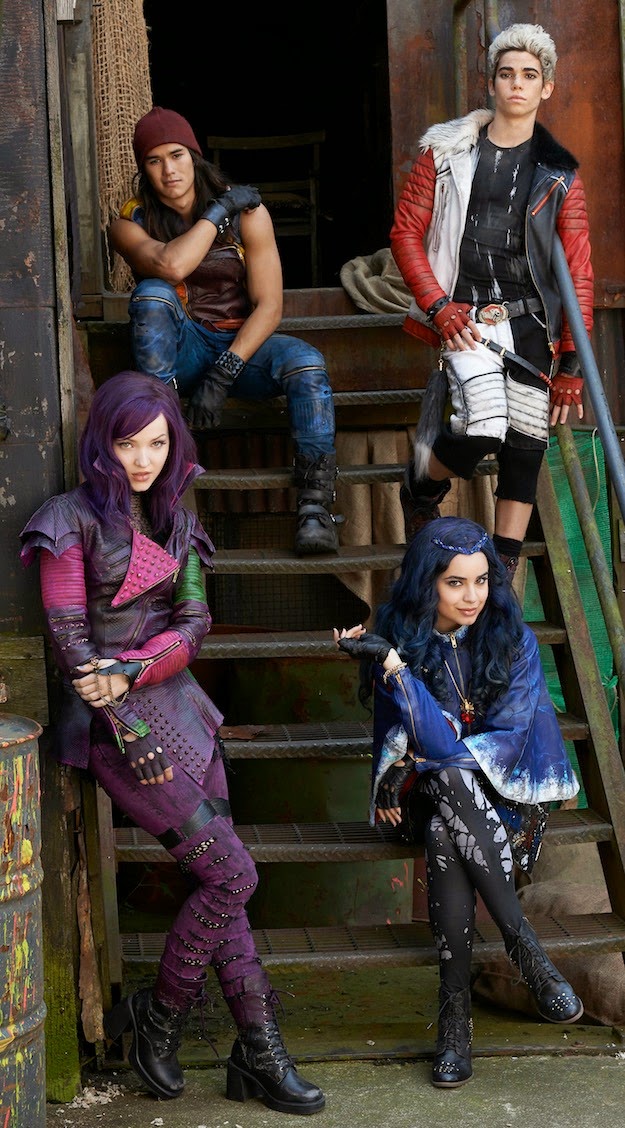 That just looks ridiculous. And look being a fan of Once Upon A Time, I will not say that setting these characters in a modern setting is a bad idea because I think it could work and OUAT has shown that it can but this is taking it in the wrong direction. And honestly other than the colors of the clothes, would you even be able to figure out these characters are related to classic Disney villains? Â  Take Jafar’s son, Jay. Â  Other than the trailer showing him with afar, I see no resemblance whatsoever.
Look I have nothing against Disney Channel Original Movies. Â I think most of them are pretty bad (Yes I like the High School Musical films) Â  but this is different. Â This film is using classic Disney characters in the hopes of launching a brand. Â They’ve already released a prequel book to the film and dolls based on the characters. Â  It feels a little cheap here and going back to Once, I know that it boils down to keeping characters relevant to but at least on Once, they put their own spin on things. Here, yeah not so much.
I can already tell you that this will not be the last time I talk about this… thing. Because when it airs, there will be a full review. And I am not not looking forward to that. Peace!