I have to admit, prior to seeing this film, I knew next to nothing about the musician simply known as Prince. I’ve never heard of his songs nor seen any of his films and I didn’t even know what that weird symbol he has meant. Recently though, I figured it was about time to educate myself about the musician. So I decided to check his first feature film Purple Rain to help enlighten me. The film tells of The Kid (Prince), a young musician who plays at a Nightclub called First Avenue in Minneapolis with his band The Revolution along with his rival Morris Day and The Time while they compete over the crowd. All while a young woman named Apollonia tries to become a singer and who sparks the interest of the Kid and soon becomes romantically involved while also attracting the attention of Morris Day as well.

One thing that’s easy to noticeÂ throughout the film is that it’s a mixture between a Concert film and a regular Musical. Most of the music numbers take place in First Avenue and they are performed in front of a live crowd. (You can’t hear the crowd on the soundtrack album though.) The Musical elements in the film are contained with the plotline of the film. You have the love-life of Apollonia and the Kid, the Band’s Rivalry, The Kid’s abusive father, as well as some elements from Prince’s life that he added into the film. While I can’t point any of the factual data out, aside from playing at First Avenue, they do help add in an interest to the film’s story.

Speaking of the music in the film, the songs are the best parts of the film. 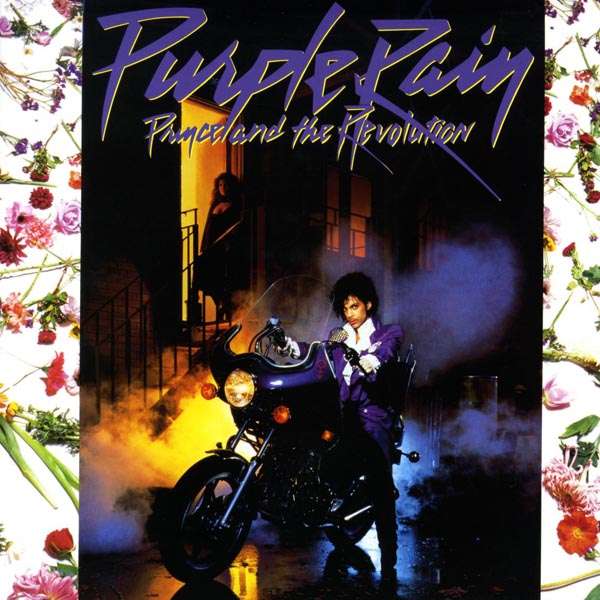 All of the songs were written by Prince and the majority are performed by him and the Revolution as well as a couple by Morris Day and one by Apollonia as a part of a group called Apollonia 6. I have to admit, I thought the songs in it were surprisingly pretty good. I had no idea what to really expect from Prince and the Revolution, lyrically or sound-wise, but it was a bit of a surprise to me since the majority of people I know aren’t big Prince Fans and have often said negative things about his work. If I had to pick a favorite, I’d probably go with the opening number, Let’s Go Crazy, or the titular song, Purple Rain. (Plus Darling Nikki and When Doves Cry are starting to grow on me.)

Prince’s role in the film, the Kid, was a rather interesting character.

He often shines the most and shows a large passion playing his music, but he doesn’t listen to his band-mates and is often quick to discard new material from anyone else but him. Â He also while deals with a bad home life due to an abusive father as well as trying not to fall in his footsteps. Plus most of his thoughts and feelings are expressed through body language and he doesn’t talk very much.Â Â He ended up reminded me a bit of Tony Manero from Saturday Night Fever in the sense that both of them are trying to ascend to something better in their own worlds.Â

Apollonia was the character that received mostly mixed reactions from everybody who saw the film.

She was often describe as boring and was mainly just there for someone for the Kid to form a relationship with, as well as earning a Razzy nomination in the process. Â Personally, I thought she was an okay character. She, for the most part, was just interacting with Prince and Morris Day and often felt, to me, like just a way for the two be see themselves better than the other.Â

The other characters in the film are a bit lacking though. Morris Day seemed to be interesting, but the film rarely touches up him since the film’s main focus is, more or less, the Kid and his life. He does appear from time to time (No Pun intended) to taunt Prince as well as play songs with his band, but that’s about it. (A bit of a shame, he was actually a good actor.) The members of The Revolution don’t get much lines and dialogue either. The two female members are the more prominent since they want Prince to listen to their tape of a song they wrote and often play notes from it on occasion throughout the film. (It might be pretty obvious which song it is when you hear it.) Aside from that they don’t do much.

Final Thoughts: Much to my surprise, I ended up really liking it. Having no idea what to expect from him, I went into it with no real expectations, but I was genuinely surprised by what I saw and heard from Prince. I’ll listen to more of his music and see some of his other films, which were films Prince directed himself, to get a solid opinion on him, but this movie was pretty good exposure for me.Â