Sorry about my blog swap being so late but I was Â out of town. Anyways, Â for my swap had alexthed and I decided to try my hand at his Movie Questions Answered but with an MLP twist. Â Seeing as he’s already done Disney Questions Answered. I hope you enjoy.

Because Friendship isnâ€™t only magic. Itâ€™s law and anyone who doesnâ€™t followÂ  the law of Equestira will face the terrorÂ  that is Celestiaâ€™sÂ  hoof.Â Â  That poor griffon never stood a chance after mocking Pinkie Pie but she was delicious.

Will the pets come back for an episode? I miss Tankâ€¦.

Theyâ€™ve been there the entire time having their own adventures.Â  Why do you think saved the Mane Six from the mind control of a water sprite?Â Â  No, that seriously happened. Check Issue #23 of the IDW comics.

What exactly did EQG Pinkie see when she poked her head through the portal?

There have beenÂ  varying reports that she either saw the Smile Song but others have said that she saw cupcakes. Lots and lots of cupcakes!

No, not that kind.Â Â Â  You sicko,Â Â  cupcakes that Mrs. Cake had just finished baking.Â Â Â  Jeese, get your mind out of the gutter.

Fusionater asks:Â Â  Will Celestia and Discord ever have a full conversation?

Rumor is that the sun princess and god of chaos have been meeting behind closed doors for some time and have been having more than just full conservations there.Â  Â Apparently, after the defeat of Tierk,Â  Celestia and Discord started dating each other.Â Â  And Celestia is about to Discord, the prince of Equestira.Â Â  Luna, help us all.

Jim Bevan asks:Â  Why do people like to ship Octavia and Vinyl Scratch?

Funny story, this is one ship that the fandom got right.Â  As Octavia and Vinyl Scratch had been going out for some timeÂ  and are actually now engaged.Â Â  I never thought it would work out and honestly, I was pulling for Lyra and Sweetie Drops Bon Bon to walk down the aisle first but something about opposable thumbs got in the way there but as for as the wub master and the cellist,Â  Iâ€™m happy for them.

Alexthed asks Â Are Discord and Q from TNG related?

I donâ€™t know I never watched Star Trek.Â  But I have heard thatÂ  Discord isÂ  justÂ  an illusion of Q being trapped in the Holodeck for so long butÂ  again, I cannot confirm nor deny that.

T-kun asks:Â  Why do they have to be so cute? 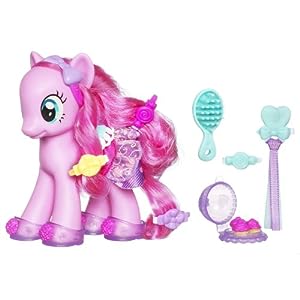 Though looking at some of these toys, they do leave something to be desired when compared to their cartoon counterparts. Yeesh.Â Â  Hasbro couldâ€™ve done a better job here.