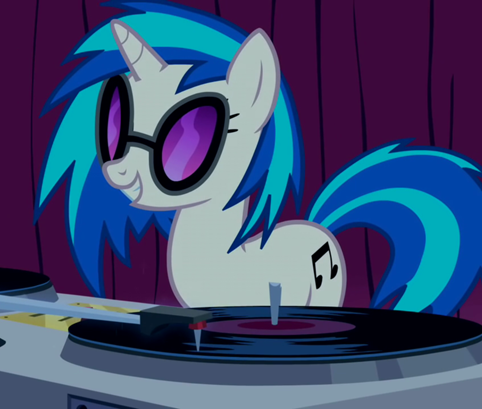 There is no denying that MLP:FIM has a very active fanbase, especially when it comes to background characters. When an unnamed one-shot or recurring pony manages to leave a lasting impression with their actions, bronies and pegasisters can’t help but come up with names, personalities, even back stories for the characters. Just head over to DeviantArt or Equestria DailyÂ to see how much appreciation is given to Derpy, Doctor Whooves, and Lyra Heartstrings. For my blog swap with Tim I felt I’d look at one of the most popular ponies to gain an expanded life in the MLP fanbase, Vinyl Scratch. I’ll be using the traditional Trotting Through Life character breakdown with some deviations concerning how she’s portrayed outside official media. On that note, let’s start off with…

Is it Vinyl Scratch or DJ Pon-3? I won’t lie that I was confused on this issue for quite a while because of conflicting information. Just about every fan fiction, comic, or video I’ve come across refers to the hard-rocking filly as Vinyl. When it comes to the official media, however, it’s a different story. While she’s yet to be directly addressed byÂ in Friendship is Magic, commercials for the show gave her the name DJ Pon-3. This is also her moniker in the mobile game andÂ the Elements of Harmony Guidebook.

Looking beyond the source material, however, we run into another issue. While several collectible figurines identify the party pony as DJ Pon-3, others call her Vinyl. The second series of collectible trading cards published by Enterplay had the following flavor text on herÂ solo card:

“No ultimate pony party is complete without the wicked beats of DJ Pon-3! This musical pony is rarely seen away from a turntable, and never without her infamous shades. Whether sheâ€™s spinning for a fashion show or the wedding of the century, DJ Pon-3â€™s got what it takes. Not many ponies know that DJ Pon-3 is actually a stage name, and her real name is Vinyl Scratch. No matter what name you know her by, if your bass needs dropping, this is the pony for the job!”

A suitable answer, right? It would solve the problem, but Enterplay only has a license to produce MLP material; it isn’t directly connected to Hasbro. Furthermore,Â the inclusion of “Wubs” as one of her likes indicates that their description was partially inspired by fan material.

Quite simply, I don’t care what name fans call her by. But until Hasbro issues an official decision, I’ll continue to refer to her as Vinyl Scratch. It just sounds cooler than DJ Pon-3 (for similar reasons, that’s why I still call Eggman “Robotnik” in the Sonic games.)

Again we’re running into a gray area since Vinyl has yet to have an official VA on Friendship is Magic while several individuals have given her a voice in fan creations (HannahK, Rina-Chan, Foxy Lee), all of whom do a great job with their own personal interpretations. However, my favorite actress to step into the role will always be Jessi Nowack (Nowacking), best known for her work in the abridging community on works like Dark Swamp, Pokemon ‘Bridged, and Hellsing Ultimate Abridged. Part of this is because she was the first person I ever heard give Vinyl a voice in the video Epic Wub Time from Alligator Tub Productions. (Â https://www.youtube.com/watch?v=Sob1t-iUCmE )

No disrespect to the other VAs I’ve mentioned, but Jessi nailed her performance as Vinyl. She put so much energy into the role it sold the character as a party-hard DJ. The slight scratchiness in her voice was a subtle touch suggestingÂ that Vinyl likes to shout and whoop it up when the mood is right. She was boisterous, brash, a bit naive, but overall appealing. It sold me on the character and on Jessi as her unofficial voice actress.

While characterization varies slightly depending on the work she’s featured in, Vinyl is almost always as much of a party pony as Pinkie Pie. She loves vibrant surroundings and good music, especially ifÂ she’s the one making the music and making it loud. Fittingly, sheÂ tends to be as wild and impulsive as the beats she lays down, losing herself to the jam whenever there’s an opportunity to rock out. There are times when her extroverted behavior can lead to the irritation of others, though Vinyl never intentionally sets out to annoy her friends; she just has trouble knowing what her limits are. And while she can get under other ponies’ skin sometimes, she’s a dependable friend who’s always there to help out.

As I said, this is just a template for the character. Fans have built on this depiction to provide their own interpretations of Vinyl, and they are quite diverse.Â My Roommate is a Vampire turned Vinyl into one of the undead to justify her active nightlife,Â her never removing her sunglasses, and her presumed red eyes (which were eventually revealed as magentaÂ at the end of A Canterlot Wedding.)Â Can’t Be SavedÂ and its sequelÂ Dimmed SpotlightÂ take a much more somber, darker look at her inner demons, exposing fears that her obsession with music is driving those close to her away and that she’ll never be appreciated for her art. My personal favorite fan-series is The Vinyl Scratch Tapes by Corey Williams which made her a talk show host for the first radio station in Equestria; K-COLT. Here she can be a bit more abrasive and snarky, especially when dealing with guests that get on her nerves, but also reveals a much deeper pony behind the image she presents to everyone else. I really don’t want to spoil anything, but if you’re interested in the series it can be found here: (Â http://www.equestriadaily.com/2011/06/story-vinyl-scratch-tapes.html )

Of course, with fan material comes shipping, and Vinyl is no exception. Usually she’s paired with one of two other background ponies who have also become fan favorites. Neon Lights (aka Rising Star), a nightclub light show designer, compliments her fun-loving personality, with the pair frequently depicted as having a friendly rivalry before becoming romantically involved. Her other most common mate is Octavia, a quiet, demure, classical musician who serves as a strong contrast to Vinyl’s more boisterous demeanor, one of the best examples of “opposites attracting.” These pairings have increased substantially since 2013 after Jessi Nowack came out as a lesbian.

Vinyl first showed up in Suited for Success, briefly seen running a turntable with her unicorn magic atÂ Rarity’s fashion show. She’s also provided music for Cadence and Shining Armor’s wedding inÂ A Canterlot WeddingÂ and during Pinkie Pie’s rap about the Wonderbolts inÂ Testing Testing 1, 2, 3. Aside from those moments she’s mostly been relegated to background roles.

Vinyl appears much more prominently in the IDW Comics. While again it’s mostly background appearances, she has been the focus of several variant covers, and even had a few lines of dialogue in the issue 9-10 storylineÂ Zen and the Art of Gazebo Repair. In issues 11-12,Â Neigh Anything, the origin of her Cutie Mark is revealed. Vinyl was one of the fillies present when Shining Armor put on an impromptu concert in front of Canterlot Academy in an effort to woo Cadence. Awestruck by the performance, a musical note Cutie Mark soon appeared on her flank, and her destiny was set; she wouldÂ bring joy to others through music.

Vinyl’s human counterpart in the Equestria Girls series still doesn’t have a speaking role, but she has a much bigger impact in the events of the films than she does in FIM. In the second film Rainbow Rocks, she’s one of the few students who didn’t fall under the Dazzlings’ musical spell since she never took off her headphones, blocking out their siren song. This leaves her free to help Spike rescue the Rainbooms (the band formed by the human versions of the Mane 6) from a trap. Vinyl then converts her car into a makeshift DJ station, amplifying the Rainbooms’ music through her speakers so they can overpower the Dazzlings’ and break their influence over Canterlot High.

Human-Vinyl also appeared as a background character in several shorts tied in to Rainbow Rocks and was the central focus of one titledÂ Music to My Ears. The shortÂ almost completely devoid of dialogue, showing Vinyl busting a move on her way to school while listening to dubstep. The animation does a spectacular job synching herÂ movements and those of everything around her to the beat, almost like she’s part of the music, influencing whoever she encounters with good vibes. Even when her headphones are confiscated, she just pops in a set of earbuds to keep listening. Vinyl won’t let anyone stop her jam. (Â https://www.youtube.com/watch?v=qh7j1qUaGOc )

Say it with me now… BASS CANNON! (Â https://www.youtube.com/watch?v=QxgnKH5wo6U ) I think the reason why I and so many other bronies are fans of Vinyl Scratch is that she was treated very well by those who first adapted her to media outside the show. They saw a fun-loving, energetic pony and expanded on that to give her a memorably outgoing personality. Even if Hasbro decides to give the character dialogue and a set voice actress in the show (which I doubt considering the backlash that occurred after Derpy spoke inÂ The Last Roundup), the persona established by Jessi Nowack and others is too far ingrained in the public consciousness. It wouldn’t be the Vinyl we’ve come to know. For now I’m glad that Vinyl Scratch is in the hands of the MLP fanbase, and I look forward to seeing what new exploits she’ll be part of.