The Fantasy genre is something that I highly ignored throughout my younger yearsÂ but I eventually got into it over the years.Â When I usually think about my first exposure to the genre, I always come back to the Chronicles of Narnia. The book series served as my introduction into Fantasy and helped me get into other works of the genre such as the Lord of the Rings, A Song of Ice and Fire, Dungeons and Dragons, The Elder Scrolls series, and many other fine examples of the genre. Much like all of the great fantasy novels of old, the series eventually started getting adapted to film and television. While not all of them have been adapted yet, the one that has the most is, obviously, the most popular of the series, The Lion, The Witch, and the Wardrobe. While I could talk about the Live Action Disney adaptation, I’ve decided to take a look one of the more obscure ones which was an animated Made-for-TV movie in 1979 which won the first Emmy for Outstanding Animated Program. So this might be good…might be…

During WWII, the four Pevensie children, Peter, Susan, Edmund, and Lucy, are sent away to a mansion off in the countryside in order to be safe from the London air-raids. Once there, they indiviually go off an explore their temporary home and play hide and seek. Lucy shortly discovers a massive wardrobe in an empty room and when she enters, she discovers that it’s acutally a gateway to a completely different world called Narnia.When she returns, her siblings assume she’s merely joking, but they soon enter and suddenly realize the truth and learn about the White Witch of Narnia and try to stop her.

The Animation in it is a bit lackluster. While I understand that sometimes the Animation at the time wasn’t very impressive at times, I still think that a little more effort could have been put into it. A lot of the characters looked weird (i.e. Tumnus looked liked Tom Baker crossed with a Devil and Edmund looked like John Lennon.) It’s definitely one of the things that is a bit disappointing considering Watership Down came out a year prior to this film. 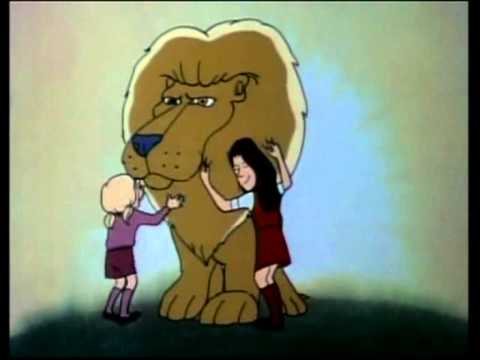 The Character’s depictions in the film were extremely dull. They mostly resembled one note characters and have only a few traits to them. Peter and Susan were boring and generic good guys, Lucy just asks about Mr. Tumnus all the time, and the others are completely forgettable. The only character that was accurate to the book was Edmund. Â He was basically a perfect depiction as that he was an asshole to his family and obvious falls to the evil side in the beginning.

The Voice Acting in the film is very cheesy. Considering there were both British and American dubs, Both probably have their ups and downs to them, but the version I heard was American and it was incredibly bad. The majority of the characters used fake accents along with adding no emotion what so ever. Plus Lucy was absolutely annoying considering she kept shouting every line she had to everyone she talked to. I basically just muted her every time I heard her talk.

When comparing it to the book, the film is pretty accurate to it. It’s a lot like the Disney version except where that adaptation added in some new material for the film, this one left some scenes out (as usual with most adaptations.) One thing that bothered me throughout the film was the fact that the Pevensies seemed at times to have complete knowledge of everything about Narnia despite the fact that they only arrived there within minutes. It’s a bit bothering to me, but it was also easy to get over.

Final Thoughts: It’s very cheesy. It was a bit of what I expected when I was going into it. It’s basically just a bland animated adaptation that was easily forgettable and was lost over the years. If you want a better Narnia adaptation, the Disney films as easily and obviously the better choice as well as some of the BBC adaptations.