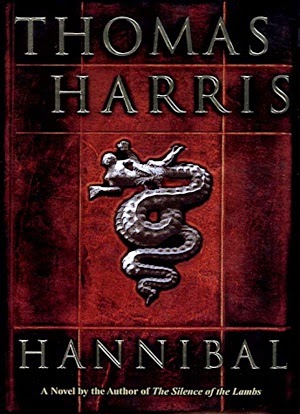 Basic Plot: Seven years after the events of The Silence of the Lambs a former victim of Hannibal Lecter seeks revenge.
—————————————————-

The Ending
The ending of this book is considered controversial. I can very much see why it would be, but I wasn’t bothered by it. It was only after I finished the novel that I felt like I should find problems with it. It does involve manipulating a strong character with drugs but, at the end of the day, both characters stay strong and choose the path they would’ve anyways. In my opinion, at least.

The Character of Hannibal
Hannibal, in this book, is a more sympathetic character. The narrative has you rooting for Hannibal to succeed and Mason Verger to fail. While, I admit, Hannibal kills and eats people which is a bad thing, he is a complicated character. Even the worst things he does can be looked at as happening due to a warped sense of good intentions. This doesn’t make them 100% right, of course. Another point that helps Hannibal appear to be good is that Mason is shown to be a top grade asshole.

Clarice
Clarice is shown to have created new enemies for herself after she had killed the killer from The Silence of the Lambs. Her struggle to remain part of the FBI is a big part of the novel as she not only has to deal with Lecter but others that want to take her down. When Jack Crawford leaves the picture it makes everything with her plot line even more intense.

Final Thoughts
This is a good end to Hannibal’s story (chronologically speaking as Hannibal Rising was published after this). I do wish that we got a better handle on what happened to both Clarice and Hannibal after this, but what we did get was good enough. I like how Mason Verger was built up as a villain and the end of his story. I don’t think I will forget the brainy dinner scene near the very end of the book anytime soon.