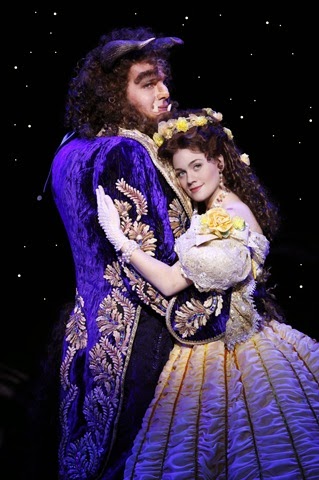 Hello & welcome back to A Look at Disney. With Valentine’s Day fast approaching, I’ve decided to turn to Love Songs. Popular Disney Love songs but there is a caveat here, these are from the Great White Way as we will be taking a look at Broadway versions of popular love songs. With that out of the way, let’s begin.

Beauty and The Beast

I wasn’t sure on this one at first but when the actor playing Sebastian started singing, I found myself getting swept up in the moment. It’s staying true to the classic song from the animated movie, which isn’t hard to do. All I can say is that this song feels me with happiness and joy. Granted, they could have cut Scuttle out of the song. (HATE that character but that is staying true to the song). I can just picture this one on stage at a theater and being swept up in it.

Something To Believe In

Ah, now we come to my favorite love song from this group. I’ve made it no secret that I’m something of a Fansies. And while I really like the movie, it had one of the most awful romantic interests in a Disney movie. The stage adaption improved by bringing in the character of Katherine Plumber. A young headstrong woman trying to make her way in the world of journalism that could go toe to to toe with Jack Kelly made the relationship feel more natural when it blossomed. This song is indicative of how much these two care for one another. I remember when I saw this on Broadway, I bought their love and forgot that I was watching two actors and thought I was actually seeing two people express their love for one another. Fun fact: This song was not in the movie and was written for the stage production of Newsies.

Okay, this is going to sound bad. Even though I downloaded the Aladdin Broadway Cast Recording from Itunes, I normally skip this song. It’s not that it’s bad and I like Adam Jacobs as Aladdin in the other songs and Courtney Reed as Jasmine is fine but here Jacobs’ voice sound too old for Aladdin. And that just takes me out of the song. It’s not that it’s bad but I just can’t see Aladdin here. Which is strange because with every other song that Jacobs sings on the soundtrack, I get Aladdin but not here. It’s not bad but I’m just taken out of the moment.

There you have it, my look at 4 Broadway love songs courtesy of Disney. I hope that you’ve enjoyed this. Peace!