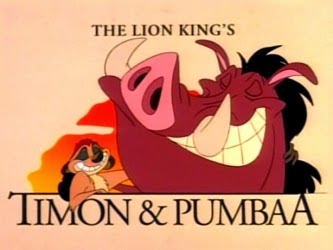 Hello & welcome Â back to A Look at Disney. And today, we are doing something a bit different. You see Â with these events, Â I normally Â like to do an episode review of a show that ties into the movie that I am reviewing and I happen to own a VHS Tape containing episodes of Timon & Pumbaa. 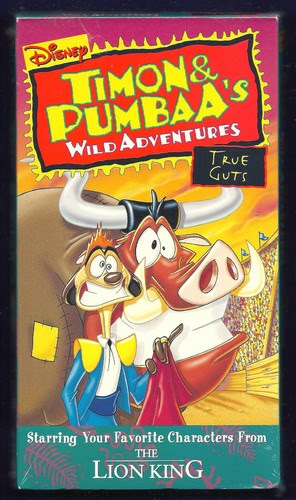 I pop my copy in the VCR Â and Â first, I’m hit with the theme song, which was Hakuna Matata. As though, it’d Â be anything else. Â And I think okay, I’m in for a good time but then the first episode plays, Â The Pain In Spain. 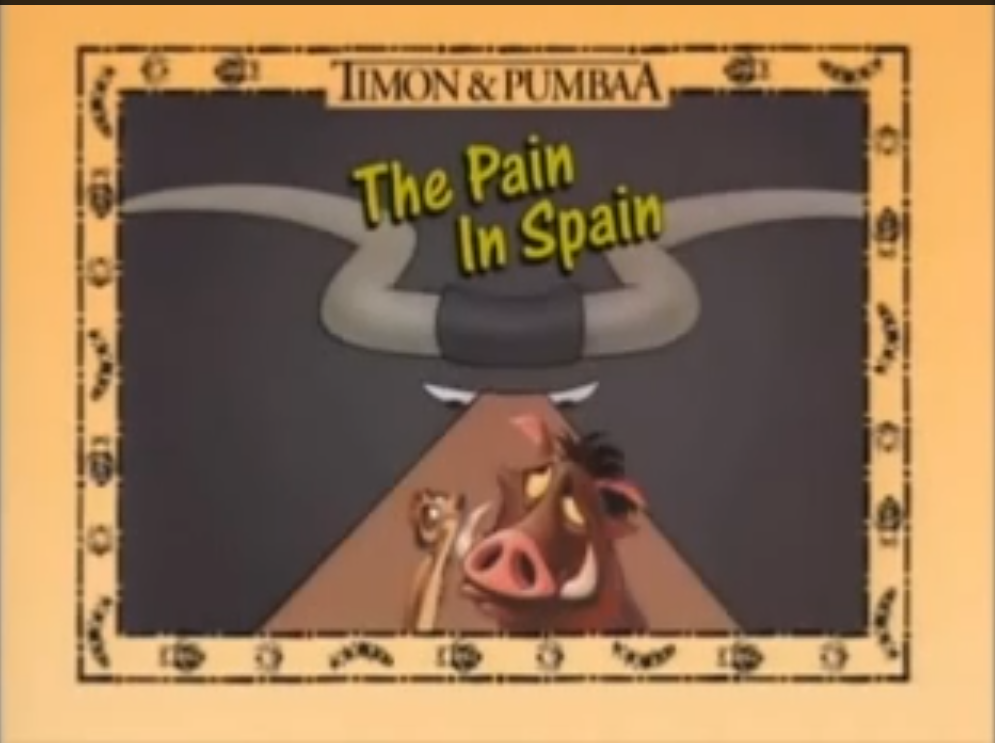 Â It’s really dumb, Â two Â matadors mistake Pumbaa Â for a Â bull because he is a bull costume and fire their old bull because he has gotten out of shape. Â Okay, start but it drags on and Â things Â just seem to get crazier and crazier from there. Â I mean, the old bull comes back and to save Pumbaa, Timon has to partake in the bull fight and at one Â point, Â the bull El Toro (as The Lion King Wiki told me, was his name) is Â seen driving a race car. Â The short ends, Â it was okay but nothing too memorable. Â Then Â the next one starts and we get, How To Beat The High Costa Rica 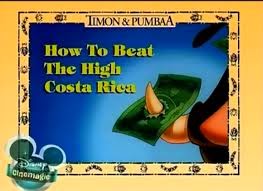 The basic gist of this short is that Timon & Pumbaa return a suitcase full of stolen money to the crook that stole it, Criminal Quint. 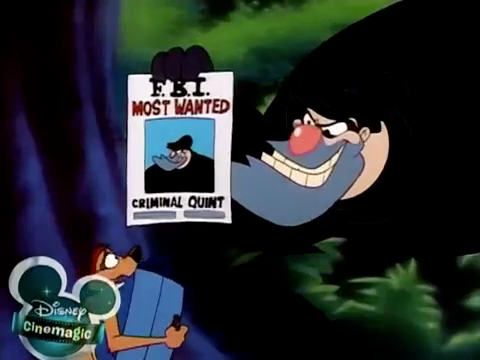 They realize that they need to get the money back and Â there are some funny moments such as Timon dressing up as Santa Claus or Â a callback Â to Timon doing the hula in the movie and Pumbaa pointing that may not apply to this situation. Â And the ending was clever too with how they switch Quint’s suitcase with theirs Â full of dirty laundry but again, Â at the end of this short, I was left with a feeling of oh, I just watched another episode. Â I didn’t get that many laughs out of this one. Â The two Â Timon & Pumbaa shorts were okay compared to the final short, which irritated me to no end. Â The last one starred The Hyenas and dear lord, did I hate what they did to the Hyenas here. 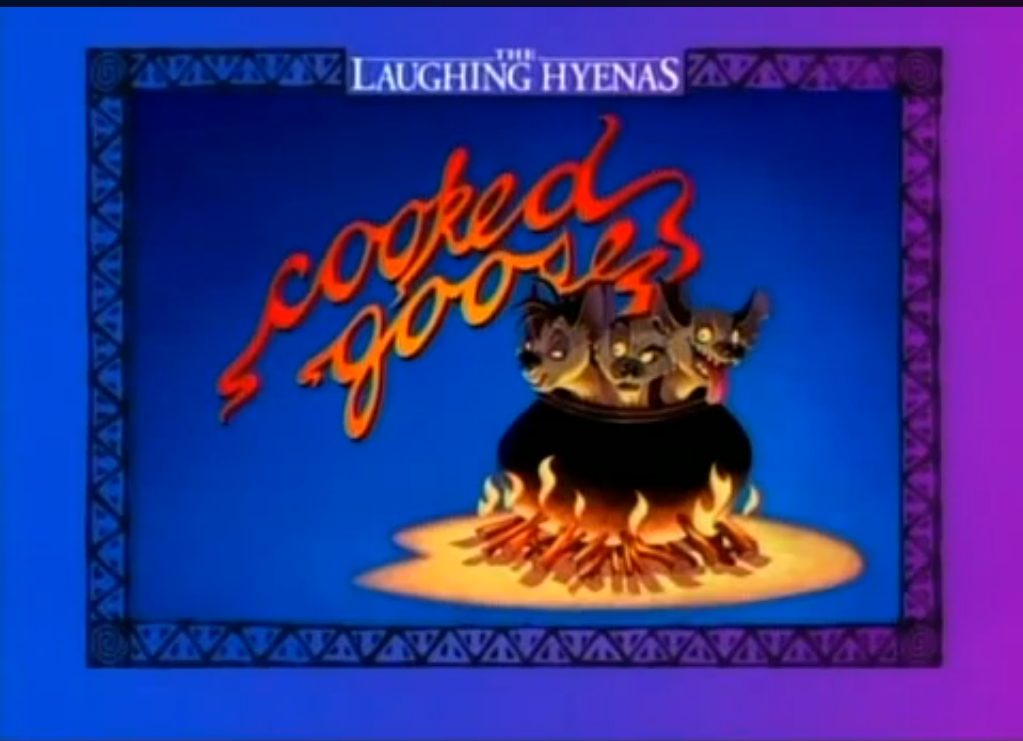 The main plot of this short is that two Â cheetahs are trying to hunt Â but the hyenas’ with their Â obnoxious behavior and stupidity keep Â scaring off their prey. So, they Â have come up with plans to get rid of the hyenas. Â Now, here’s my issue with this short, it made the Hyenas stupid beyond reason. The Hyenas (sans Ed) were not stupid characters. But this series decided to turn them into blithering idiots that probably couldn’t tell the difference between their left paw and their right paw. Â The different ways that the two snotty and snobby cheetahs trick the Hyenas is just embarrassing. I mean, at one point they trick them with a rocket ship that flies them into a volcano. And they come back complaining that there were no peanuts or in flight movie. I don’t Â know what happened but Â this short Â made the hyenas look really dumb and as I have gone over before. That was not the case, Â Shenzi & Banzi could be smart when Â they worked Â together, granted the latter was impulsive and hot tempered but not stupid. Â Ed was the dumb one and that’s fine but to make all three of them as dumb as this short is Â just infuriating.
I dunno Â maybe I need to watch a couple more episodes before passing judgement but I can safely say that I was NOT impressed with what I saw here. Â It seems to me that after watching these three shorts that the biggest problem is that the creators did not understand the Hyenas were not stupid characters. And as for Timon & Pumbaa, perhaps their comedy works best in the movie when they have a straight man and a serious story to bounce it off of. Â Though some could argue that The Lion King 1 1/2 (one of the few decent sequels) shows that their brand of comedy Â can carry a story. 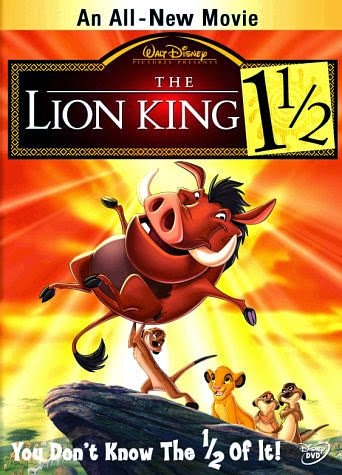 Though again, while the movie is mostly Â comedic moments, Â it’s telling the story of the first film from Timon & Pumbaa’s perspective thus giving Â us comedic moments during a story we already know. Does all of it work? Â No, the bowing scene after Pumbaa passing gas was kinda dumb but for the most part, Â this movie is able to use their brand of comedy as a strength whereas the TV show was not able to, at least in my opinion. Â Perhaps, it was because this film Â has the first movie to rely on whereas the show had to create new stories that made it stronger but even then, Â it didn’t Â feel like the show was trying Â and was instead Â just coasting by on the popularity of Timon & Pumbaa in the hopes that kids would tune in and I know that I did but looking back at it now as an adult, Â this show wasn’t very good.
Well, Â this ends my rather disappointing look at Â Timon & Pumbaa: The Series but we aren’t done with The Lion King on television just yet. Join me tomorrow as I go over my thoughts on the new upcoming Disney Junior series…
The Lion Guard 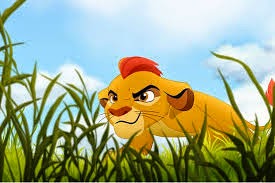