It Came From the Drive In – Garzey’s Wing

Throughout the course of my life and viewing the tens of hundreds of films and television shows Iâ€™ve seen, the world of Japanese Animation has always been something that Iâ€™ve surprisingly had little to no interest in.

Itâ€™s something that been a bit of mystery to me considering Iâ€™m a big fan of a lot of Animated Films and Shows. I know of the various shows and how diverse they can be, but Iâ€™ve never given it much of a chance until recently. While some of what Iâ€™ve seen have been fine so far, I always find ones that I have ended up hating immensely which leads me to what Iâ€™m going to talk about. Today, Iâ€™ve decided to change things up for this review as Iâ€™m going to look at a Three Part OVA thatâ€™s well known for being amazingly terrible as well as being the low point of Gundam Creator Yoshiyuki Tominoâ€™s career. Well with a reputation like that, it seems I must somehow make sense of my convoluted situation and take a look at the series entitled Garzeyâ€™s Wing. A boy named Chris is traveling off by his soul suddenly taken by a Giant Technicolor Goose Ghost to a msytical world called Byston Well where he is believed to be a Holy Warrior who has the ability to use a power called Garzey’s Wing which will help them against some evil King. Meanwhile, his body is still in the human world and somehow the two are able to communicate via Necklace and his body tries to help the alternate Chris by giving advice.

The plot of this may be extremely simple, but it sure doesn’t seem like it when you watch it. The story constantly adds in scenes with Chris in the real world, discussions with the King, and background characters talking to each other at random times. Not to mention the fact that all these scenes are tossed around in a very incoherent order and it’s very distracting. 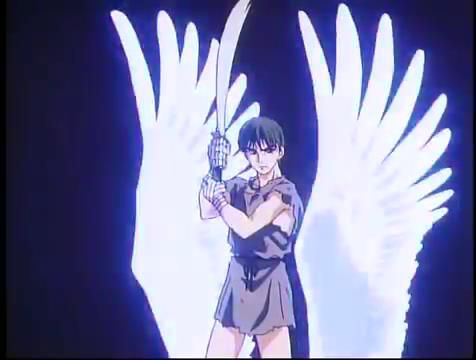 Normally when watching Anime, I don’t really care about preferences over English or Japanese audio,…but this is the worst english dub I’ve ever heard. The translation sounds like they made it so literal that it sounds odd at times and to add to the damage, these VAs are HORRIBLE. They have almost no emotion in their dialogue and they sounded like they were shouting their lines most of the time. Although, they do offer some funny lines in the first two parts of it.

With the voice acting being as bad as it is, it definitely adds on to how boring the characters are in this. Both Chris’s are boring characters who wouldn’t seem like the “Holy Warrior” that people would want…well, then again, Ash Williams wasn’t much of a chosen one they hoped for either in Army of Darkness.
There are multiple female characters throughout the show that often try to help both Chris’s by either fighting or giving him some moral support. Although, the basically are very pointless (much like everybody in this OVA) and often seem like they don’t actually care about the current situation.
The Rest of the characters are pretty much completely forgettable and only show up to add additional dialogue and exposition to move the story along. Although the one character I absolutely could not stand was a fairy named Falan Fa.Â She basically came with Chris to Byston Well through some very oddly explained ways and she’s extremely annoying. Probably the most anime characters I’ve seen so far. (I’ll probably fine one that’s annoys me even more though.)

The Animation throughout it is mediocore at best. There aren’t very many scenes that are very brilliant as it could be, but there were some really bad scenes that had people moving in place as well as some repetitive animations sequences used as well. So, much like other obscure OVA’s that I’ve seen, it definitely lacks in the animation department.

Final Thoughts: This was bad…really bad. I was a bit baffled on how bad this actually was. It was one of the most intersting yet boring OVAs that’s out there in the wide world of Japanese Animation. It’s pretty much up there with a film you’d see on Mystery Science Theater 3000. I think it’s worth watching for Riffing material and some of the hilarious dialogue, but don’t expect much greatness outside of just that.