Now-a-days, the most overused and much hated type of film that has often flooded the film market is the Found Footage Genre.
Whether it be for the Paranormal Activity movies or any other film else aside from them, the genre has often been a way for studios to chase in on a popular film style as well as saving a couple of bucks along the way since it’s cheaper to film with a camcorder instead of a typical high definition 8mm film camera and the result most being films that induce motion sickness. With all the current stuff being about nothing but Ghosts and intergalactic beings, it’s pretty obvious that most of them aren’t worth any time viewing. (Although, I do think that there are some that are worth a look.) So I’ve decided to dig deep into the genre’s film vault and try to find something different and lucky for me, I’ve found the perfect film to fit the bill. A film that is considered the first Found Footage movie as well as being popular due to the reaction and controversy surrounding it as well as being banned in multiple countries. All of this and more thrown into a 1980 Italian Exploitation film known to the world as Cannibal Holocaust. Synopsis: A film crew consisting of young college students decide to go to the Amazon to shoot footage for a documentary on the native cannibal tribes. Sometime afterwards, the group has not returned and a New York University anthropologist decides to take on the task of finding them with the help of his guide and a native of the Yacumo tribe they captured.

Unlike all of the modern found footage movies, the film plays itself as more of a documentary. The first and second act of the film is mainly focused on interviews on the crew’s family and friends as well as the Anthropologist and the guide going through the amazon while encountering native tribes and recovering the camera footage from them. Of course then the majority of the third act is the footage from the film crew, showing off their exploration and their eventual demise which Television executives originally wanted to broadcast to the public.

While the film may have been predictable around the third act, I have to give props to Cannibal Holocaust for being the first with the inclusion of finding the footage since some of the more ridiculous films like Apollo 18 make it seem almost impossible for the footage to be recovered. 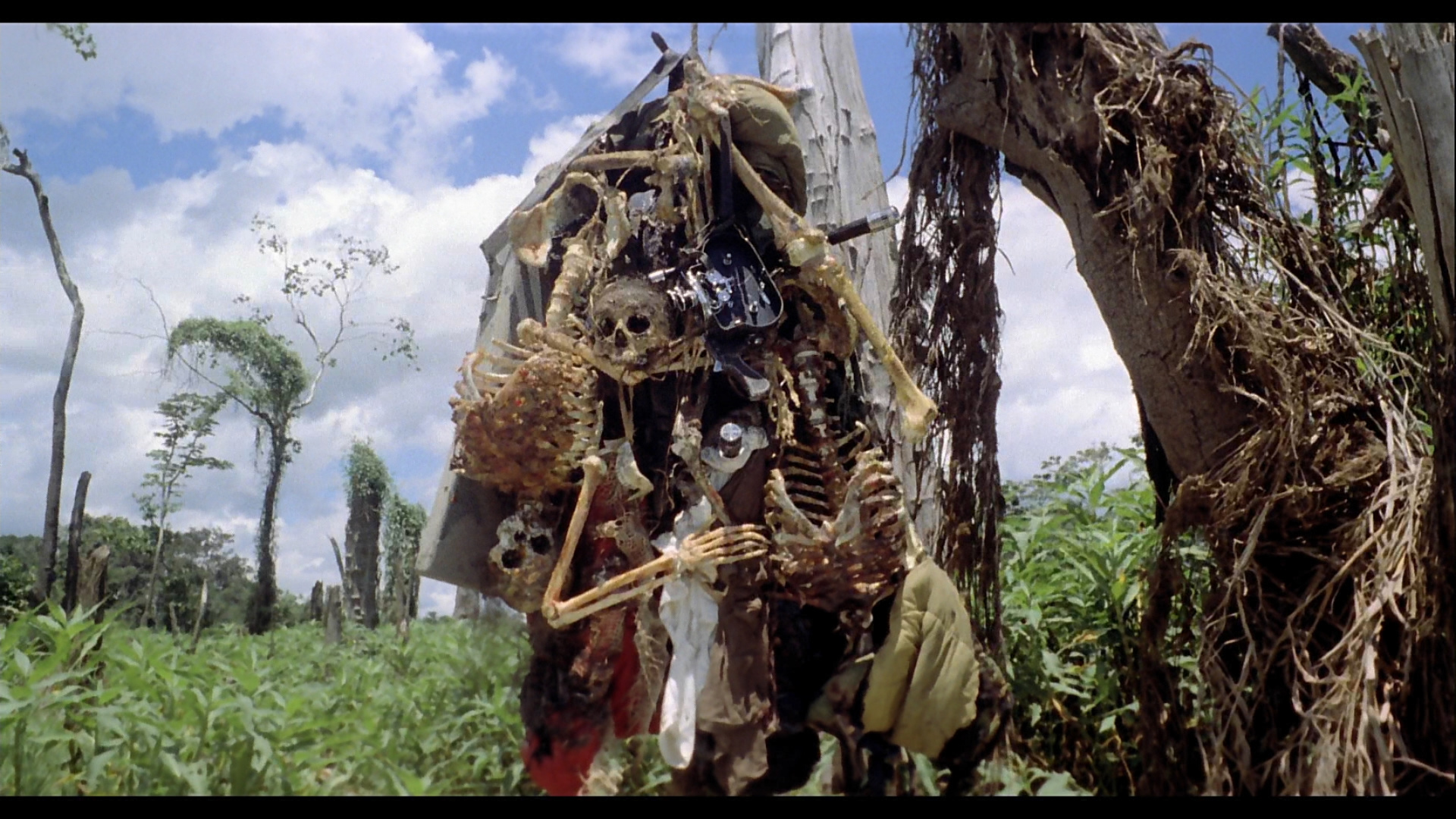 While hearing some of the people they interview and viewing the footage, I was glad that the film crew didn’t survive.
At first, they seem a bit like normal young adults in their late ’20s who were just making movies mainly for some minor artistic merit. They didn’t have much personality to them and could be seen as standard horror movie characters to kill off. However, my opinion of them quickly changed when the footage was played.
They were constantly terrorizing the locals, they shoot one of the cannibals to lead them to a tribe, and at one point they do try to rape one but the female in the group protests…even though SHE HAD NO PROBLEM WITH BURNING DOWN ONE OF THEIR VILLAGES WHILE THEY WERE STILL INSIDE THEIR HUTS.

So when they finally got surrounded by some hunters, It’s pretty much one of the best parts of the film seeing them getting what they deserve.

The one thing that is always remembered about the film, much like Ichi the Killer, is the violence.

With this being an exploitation film, it’s to be expected, but this film’s violence is surprisingly life-like and is thrown in all the time. In fact, with it being so realistic, the director was charged with making a Snuff Film due to the believe of several of the actors were killed, the easiest example is where a woman is impaled onto a wood pole. (Plus things aren’t made much easier since the actors since a contract to avoid any type of media to help make the idea of a found footage movie more realistic.) I guess if anything, the film is a technical expertise with the violence aspect of it. Plus it would definitely be unsettling to those against excessive amounts of Gore.

While the human deaths may not have been real, the animal deaths unfortunately were.
The film shows scenes involving many deaths of animals, eventually leading to its inevitable censorship and lawsuits from animal rights groups. (In my opinion, the Turtle scene was the worst.) While I have no idea they went and killed off real animals in the film, It’s definitely something that shouldn’t be allowed.

Aside from the rather interesting change of pace in the plot, the rest of the movie is a standard exploitation film. It’s violent, full of Nudity, Sex, and whatever they choose to exploit in it’s fullest form. In this case, it’s Cannibals. (I do think it’s interesting they used natives of the Amazons to interact with the actors.)

Final Thoughts: …I’m not really sure about which side I’m one for this…One hand, it’s a very unique found footage movie. On the other, it’s just a standard exploitation film. It was definitely an underwhelming experience considering its reputation, but I guess it held up to it as well in some regards. So…I guess I’d have to just have to leave it as an Okay movie.