Well, itâ€™s finally 2015, and Season 5 of Friendship is Magic will soon come out. While we are stuck waiting, we are left with many other options and alternative things Pony Related to look upon. Today, Iâ€™ve decided to uncover what is considered by many as the worst generation of My Little Pony to ever be createdâ€¦the generation of MLP that I knew of growing upâ€¦Generation 3.

Being a child of the late 1990â€™s and 2000â€™s, I was informed of this being the only My Little Pony show to ever existâ€¦Not knowing of the true horrors that were soon to be released (at the time) a horror simply called Newborn Cutiesâ€¦

â€¦Iâ€™m just lucky there are only two of themâ€¦

â€œSo Many Different Ways to Playâ€

Pinkie Pie is having a Tea Party at her clubhouse (with her mom oddly looking like a ponified Barbara Streisand) with her friend Cheerilee and her sisterâ€¦the horror that is Gen 3.5 Scootaloo. 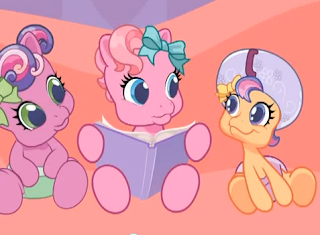 When Pinkie invites her to join the party, she goes a bit berserk and basically makes a wreck of the whole place. They then decide to have their tea party outside, that way they can all be happy.

â€¦So basically the whole thing was just to make Scootaloo happyâ€¦and apparently that was the â€œLessonâ€ of it as well…great lesson huh?

Pinkie, Cheerilee, Scootaloo, and Rainbow Dash are having a fashion photo shoot with Rainbow showing off her new scarf. (In G3, Rainbow Dash is just like G4 Rarityâ€¦Itâ€™s very weird, especially being used to G4 Rainbowâ€™s personality as more of a tomboy and being an extreme show off.) A Thunderstorm then happens and it â€œRuinsâ€ Rainbowâ€™s scarf. Afterward, Two Rainbow cross paths and a pony floats done from the sky and it turns out to be Sweetie Belle. All they do is look at here and she uses a bit of her magic, all while Rainbow Dash moans and complains about her scarf being ruined which Sweetie Belle cleans for her at the end and the instantly become friends.

This one had a “Lesson” as well ,but I wasn’t paying attention…It was probably stupid anyway.

â€¦So where do I begin with this? I guess Iâ€™ll start with the obvious. The animation in this is absolutely HORRIBLE. They have extremely robotic movement, their heads have weird movements (mainly when talking), and they look horrifying, especially Scootaloo.

I know that this was made with Flash, but they at least could have spent a little more time on it to make it not look like it had a budget of Five Dollars. The second one is considerably worse since they donâ€™t even open or move their mouths to talk. I donâ€™t really think they really cared about how it looked.

Itâ€™s pretty obvious that itâ€™s completely odd seeing the complete difference in character personalities from this and G4. Pinkie Pie is extremely calm, Cheerilee I guess would be considered on par except sheâ€™s a bit more like Twilight Sparkle, Scootaloo is just a hyperactive pony who canâ€™t sit still for a second, Rainbow Dash (as I mentioned) is basically Rarity except seeming a bit like Trixie in this version, and Sweetie Belle didnâ€™t say anything so she got the least amount of change. Itâ€™s pretty obvious that itâ€™s extremely distracting and they definitely arenâ€™t very interesting as their G4 counterparts.

Both of the stories are apparently stories that G3 Pinkie Pie is telling us, even though she only talks as an adult with the opening line and itâ€™s the same transition thatâ€™s used for the opening and the ending except the ending is played backwards. It was basically just a way to stretch it out by maybe two minutes and to show off more of that…”Lovely”…Animation.
So…I guess my opinion of it is pretty obvious…

This is basically, as ACRacebest put it, everything we fear that could come to the show. It has absolutely no likable traits, the intended audience for this is probably no one intelligent, and it’s basically made just show they can promote toys. I got more enjoyment out of the Gen 1 Movie than this. I don’t think I even need to tell anyone to stay away since you could tell right from the start that this is horrible. It’s the one thing of the MLP World that should be forgotten in the course of time.