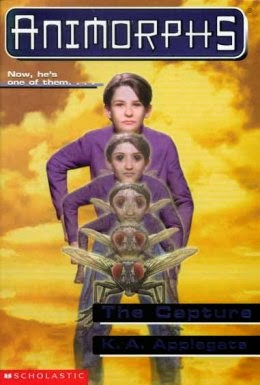 This book is narrated by Jake.

And the book starts off with a recap of what we already know. This is, again, a great thing for people who pick up this book at random without reading any of the other books beforehand. The recap ends with recounting that Tom is a Controller and that the book begins during Saturday morning at breakfast.

Tom announces he’s going to The Sharing to do a cleanup in the park and have a barbecue afterwards. He invites Jake to join the organization. Jake is, of course, creeped out as he knows what The Sharing really is and that it isn’t really Tom speaking. It’s the Yeerk inside of Tom’s head who wants Jake as a host for another Yeerk.

That’s really one of the worst parts of the war for Jake, the fact that he’s fighting for his brother’s freedom which seems out of reach. And Jake having to imagine how tormented his brother must feel.

Jake keeps up appearances and says that he might join someday. Tom will be gone for awhile and Jake has to keep back from yelling at the Yeerk that he knows what’s up. Jake stops thinking about what he’ll do to the Yeerk right before he thinks of killing Tom.

After Tom leaves, Jake makes sure no one else is home. Turns out he’s going to try acquiring and then morphing a cockroach. Why not just acquire the roach beforehand?

As Jake recaps the morphing ability he mentions the ant morph. Dear lord, Jake! Do you have to start off this book with reminding me about the ant morph?

Turns out that Jake is practicing morphing a cockroach to use to infiltrate The Sharing headquarters building.

Jake’s mind again wanders to the thought of killing Tom. He decides that that decision can come later since it doesn’t have to be made now.

Jake puts Homer outside and makes it as dark as possible before morphing a cockroach.

Jake decided not to tell any of the other Animorphs about him practicing cockroach morph since they all have had a rough time. Hell, just last book they nearly got killed as ants and they met Visser One. So Jake decides that since the others deserved rest and Tom was his brother, that he had to do this himself.

Jake realizes his first mistake was standing in front of a mirror. This means he can see himself morph which isn’t a pleasant sight. Just morphing a falcon can be disturbing and a cockroach isn’t as beautiful as that bird.

One of the biggest things Jake notices when he becomes a cockroach is the eyesight. Jake also notices that the roach mind is very calm. He gets comfortable in the roach morph and thinks that the others will agree to it when he tells them how easy it is to control.

But when there are vibrations the roach mind’s calmness dissolves.

The chapter opens with the cockroach mind losing its shit. Jake describes how fast it feels like his roach body is going as being strapped underneath a race car. That is just…I don’t like to do speed so it seems cool but not exactly for me.

It seems that someone is home. What will that person think of Jake’s discarded clothing?

The cockroach mind thinks that person is chasing it.

It is amazing how differently a roach moves. Humans can just go forwards, backwards, left, right, and sometimes up when jumping. But a cockroach can move in any direction it wants to. They look disgusting but they are amazing creatures nonetheless.

Jake realizes it was stupid to morph cockroach in his room where someone could’ve seen him mid-morph. He then thinks to go to the garage to demorph. I can get that he needs somewhere to demorph but, really, is a garage somehow more private than his room? And why not lock his door before morphing?

As he starts to head out from behind the refrigerator he sees a barn-like structure. He thinks it’s just a matchbox. He goes in to the old matchbox.

Turns out that Jake had gone into a roach motel at the end of last chapter. Marco, being Marco, says that in the most sarcastic way possible. He ends with saying that Jake should do commercials about how well roach motels work and call himself ‘Roach Boy’.Â  I would love to see that commercial happen.

Everyone is amused about Jake’s story. Well, except for Cassie who is totally not in love with him or anything. Cassie goes over to Jake to berate him and everyone knows he’s in deep shit now. She doesn’t buy his argument and Tobias tells him to just agree with her. I am laughing my ass off right now. You go, Tobias!

Rachel and Marco both comment on how Cassie is tougher than she used to be. I want to laugh and cry because they have no idea what Cassie is capable of yet.

Cassie and Jake give looks of understanding that they care for each other.

Jake talks about how great Cassie is to him and how he considers her more beautiful than Rachel. Jake also remarks on how Rachel may look like a model, but that she’s also a deadly fighter. Jake then goes on to say that Marco treats nearly everything as a joke and that they disagree about everything. But him and Marco would do anything for each other.

And finally he gets to Tobias…

Jake recounts how Tobias is now stuck in morph and reminds the reader about the two hour morphing limit.

Jake gets to how he wasn’t stuck in morph as him deciding to demorph since his parents, the vibrations he had heard, were in their room. However, his Mom walked in on him demorphing. Everyone gets a good laugh out of the conclusion of the story.

Marco then goes into serious mode and asks Jake to tell them why he was REALLY morphing a cockroach. So Jake tells them the truth.

The Yeerks are using a hospital. Marco figures out quickly that the Yeerks are going to use the hospital to make a shitload of new Controllers.

Tom arrives home smelling like the barbeque he was at from The Sharing and there is dinner going on. I don’t know how Jake spends the majority of the series eating dinner with him. I’d be too creeped out to look normal. Maybe after awhile I’d be okay with it, but not as quickly as Jake has adapted to his new situation.

It turns out the cleanup The Sharing did was on the news. Wow. Though it was probably local news so meh.

I connect to Jake’s dad so much here. His dad isn’t a cook and he says microwaving is a valid form of cooking. My hero!

Tom insulting his dad’s cooking is cut short when his dad brings up dessert. Yes, even Yeerks cannot fight the power of dessert.

Jake comments on the scene saying that it is so normal that no one would guess that Tom was actually a Controller. Well, if they knew about Tom already they would of course know. There is then exposition about how a Yeerk fits inside a human brain.

Tom notices Jake starring at him. At this point I would have pissed my pants. But Jake is ready with a joke about how Tom’s head is just empty space. Then Jake’s stabs get slightly meaner, at least to my understanding. He seems to hint that he knows Tom isn’t really himself anymore. Not that Tom’s Yeerk could tell that.

Jake and Tom just stare at each other. Jake remarks that they both had changed. The silence goes on for awhile until Jake asks to be excused. Tom then tries to sell Jake on The Sharing. He promises Jake that Jake’s life could be more important once he joins The Sharing.

Jake knows that the trick works on some people. That the Yeerks promising humans the chance to become important makes the humans into voluntary hosts. Jake replies that he just wants to be a nobody. If only he could be a nobody and not have to fight, he’d like that.

Because of Jake’s refusal to join, the Yeerk allows its true emotions to show for a split second. The Yeerk shows that it thinks of Jake and the rest of humanity in the lowest regards. That it thinks humanity will fall and that they shouldn’t bother resisting. Then the Yeerk starts pretending it’s Tom again.
—————————————————–
Animorphs Re-Read