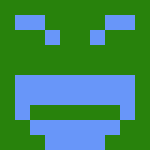 I made a ton of New Year’s resolutions this year, half of which I’m gonna forget before Valentine’s Day.

But one that I’m NOT going to forget is that I promised to be active around here again. My most recent semester of college (okay, the entire year thus far) had me too wiped to do anything but play video games and chat with Creepy.

And the year outside of college? Pretty much sucked. So this year’s gonna be different.

For starters, I’m gonna start posting again — I have plans to geek out about X-Men, Storm, Disney, Square-Enix, and a little company called Mistwalker Games. In fact, video games are going to be a MUCH bigger part of my repertoire, since I realized I forgot to talk about anything game-related amid the flurry of video game news that 2014 brought with it.

and why YouTube Let’s Players ate up so much of my time last year.

All this, and you lucky saps STILL get to hear me snark about movies and TV over on Creepy’s videos as Chibi-Cthulu.