For Secret Santa, I was chosen to one for our local Western expert Big Black Hat Man. I did plan on doing a historical perspective but nothing really came to mind. So, I have gone back to the world of Western films and decided to talk about one of the more popular westerns I knowâ€¦ 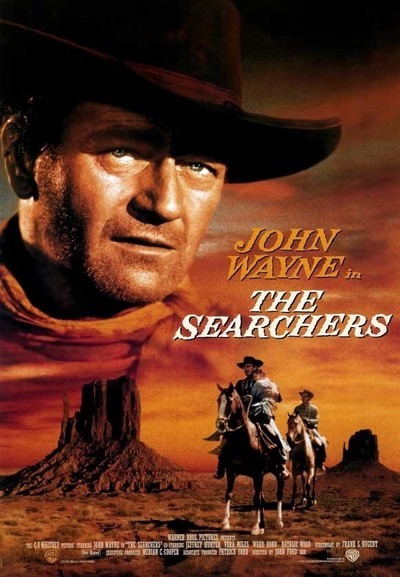 The film tells of a Civil War veteran named Ethan Edwards (John Wayne) whose film has been completely wiped out, except for his niece who’s been kidnapped by Indians and he goes off to find herâ€¦and kill her. (This was definitely a different film than what Iâ€™m used to seeing The Duke in.)

I find it odd how a film with such a simple concept actually managed to be a combination of most traits found in Westerns. You’ve got the lone hero with a moral compass (usually pointed to good), scenes of vast open desert plains, and, of course, plenty of Shootouts. Essentially, it does cover most of the basics along with some other elements as well.

It’s easy to admit that the best actor in this film is John Wayne.

I think that I canâ€™t really compare that position with anyone else in the film. I did enjoy a lot of the other characters in the film, but The Duke was easily the one man who had my attention the entire time throughout the film…Even though, his character was a bit on the hateful side when it came to the Indians.
His character reminded me a bit of Robert De Niro’s character Travis Bickle from Taxi Driver, Mainly on how he was driven to act upon through means of violence against Iris’s pimp. I guess that just shows how much this movie had an impact on Scorsese.
I think, in an odd way, he can be likely at times and he’ probably one of the most interesting character I’ve seen in a Western so far.

While I praise John Wayneâ€™s character, I canâ€™t forget that there are other great characters in the film as well. Thereâ€™s Ethanâ€™s brother Aaron and his Martha, whom Ethan start to see an interest in, Martin Pawley whose first scene with Ethan shows exactly how he feels about Indians, young Martin who tries to tag along with Ethan, and of course Debbie, his niece. They all make for some interesting characters that are great additions to the film.

From what Iâ€™ve been told, the film is the most liked collaboration between The Duke and the filmâ€™s director John Ford. While the only film Iâ€™ve seen with the two of them in it is Stagecoach, I canâ€™t really make many comparisons between the two, but Iâ€™ll admit that he definitely knew what to do with John in the film and he gave life to Ethan Edwards with his racism toward Indians being the major struggle for him along with whether letting his niece live or killing her as he intended to do. They definitely made the grade with this film.

I also have to admit that the film is absolutely gorgeous.

I know that this has been a major issue with films Iâ€™ve seen in the past, mainly involving a certain director whose films I looked at a while ago. (I think Iâ€™m getting Tree of Life flashbacks -_- )Thankfully though, the film has plenty of interesting characters, dialogue, and scenes that they help enhance the film and help it gain the legacy it has earned.

Overall, this is a really good movie. I donâ€™t think Iâ€™ll be the only one who will say that, but it definitely helped regain my interest in Westerns. If you havenâ€™t seen it yet, itâ€™s definitely worth watching.