Your mission, should you choose to accept it, is to figure out what the hell is happening in the absurd world you’ve been thrust into while attempting not to laugh, though you’re almost certain to fail that second objective.

Agent Polyblank lives in a demented alternate earth in the 1960s, tasked with carrying out several covert missions for a mysterious organization. And that’s really all I want to go into because I do not want to spoil anything. This game is insanely brilliant. It’s a postmodern parody inspired by popular spy fiction of the 60s like James Bond,Â The Man From U.N.C.L.E.Â andÂ The Saint, so it’s rife with joking references to the genre and its tropes. Agents clad in trenchcoats and fedoras are seen everywhere uttering nonsensical coded messages in the same stern Joe Friday monotone. A poorly disguised surveillance van pops up in every area, including a hotel room. Polyblank’s director is a a narcoleptic alcoholic who sends you on missions by making you take a drug called “Missonoyl.” 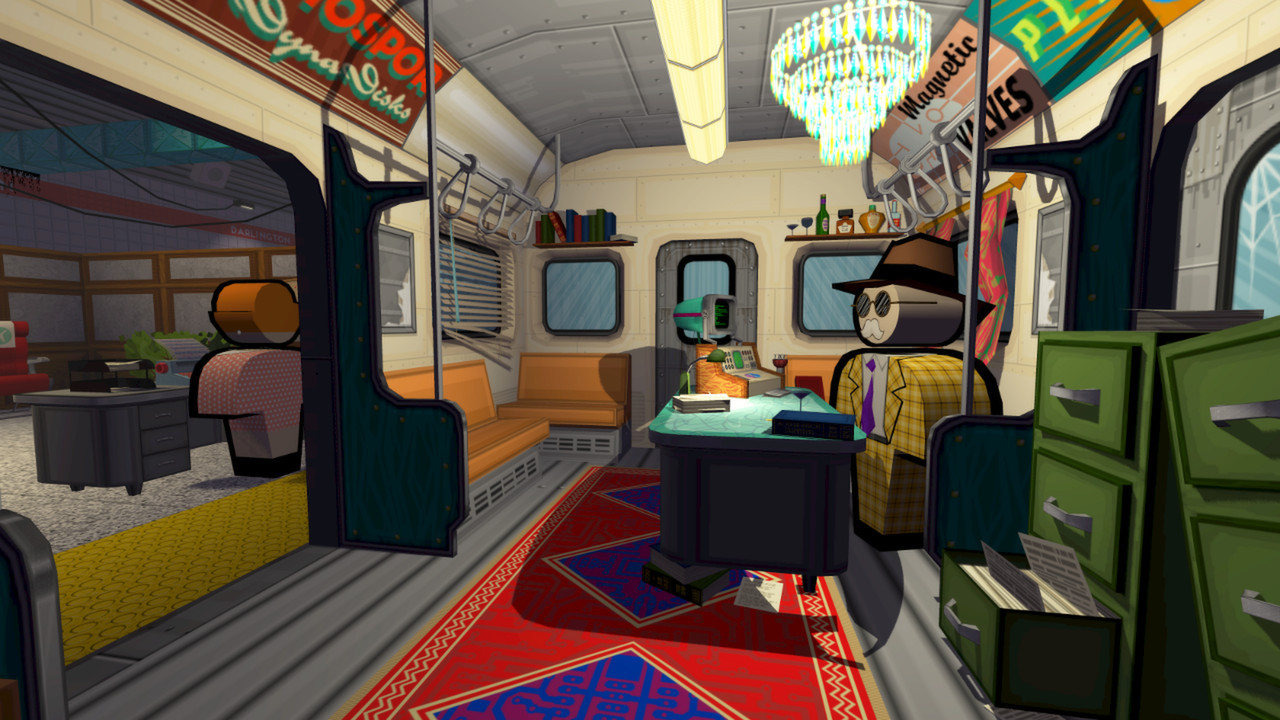 The jokes draw from other sources as well. There’s an abundance of hilarious dialogue and scenarios offered by NPCs including: a robot prostitute who seductively offers to “calibrate your sensor,” a geisha who asks if you prefer her in a kimono or a kistereo, a Japanese chef who offers you various foods only to explain they’re rather disgusting after you’ve eaten them (like miso sphincter or pigeon milk), prompting multiple spit takes from Polyblank, undercover agents that get hot food tossed in their face, characters having discussions where they outright state what they say has no relevance to the game and is just an Easter egg, and an excessive amount of computer/technology puns. 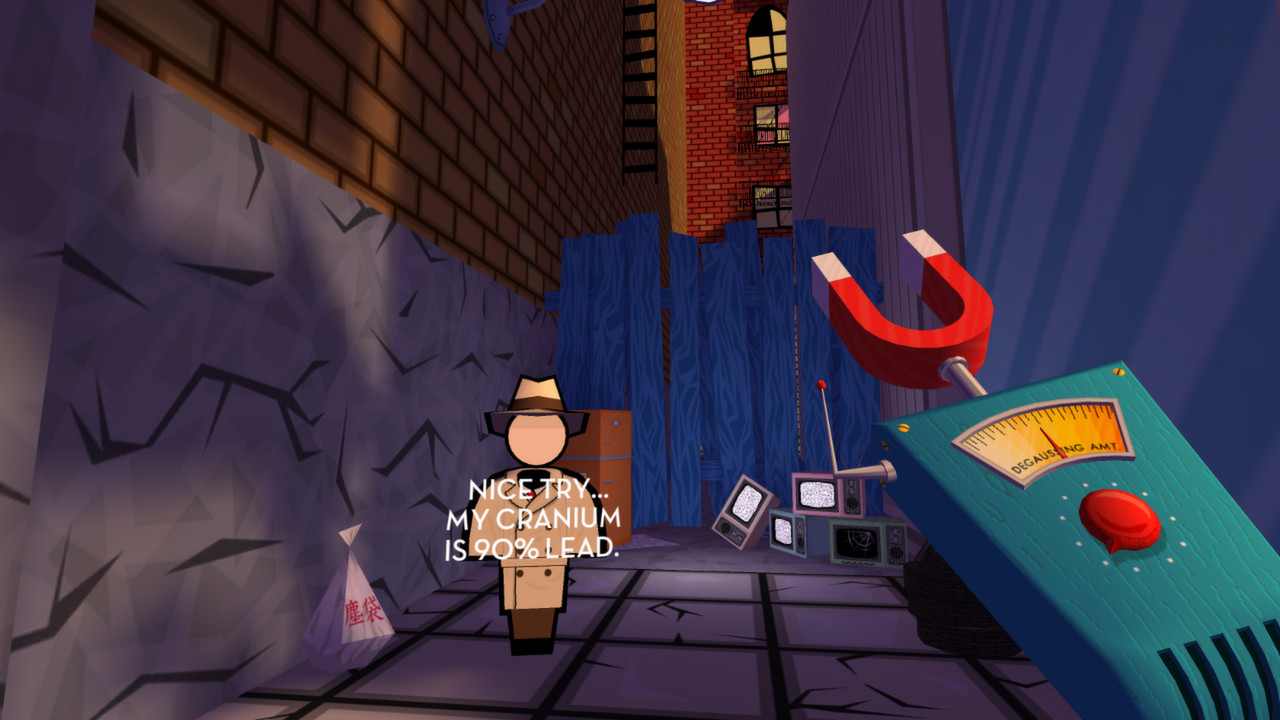 Jazzpunk relies on random humor as well – crabs that speak Spanish, talking security cameras that challenge you to staring contests, Hunter S. Thompson clones that spout drugged out gibberish, and humorous captions that not only spell out weird jokes, but can even be interacted with, at one point forming a bridge out of words. The randomness worksÂ since the odd nature of the game’s world is established at the outset, so these gags enhance the atmosphere of absurdity rather than just appearing as though they were put in as something weird to stand out amidst a relatively mundane setting. Of course, humor is subjective, so that could just be my own personal reason for finding it funny.

There are four central missions in Jazzpunk, each of which can be completed fairly quickly. Reaching the goal is very straightforward as it usually involves going to a specific area and obtaining the item the Director tasked you to retrieve. Most of the time there’s only one set way to progress, but there is some variation in the first mission: to bypass a biometric security scanner you can either fool it by holding up a photo of a scientist who works as the lab you’ve infiltrated, or make a copy of your butt and use that so the scanner will identify you as “Dr. Buttley.” Going through the central missions the game can be completed in under an hour, but to expand the playtime, and the amount of fun that can be derived, you need to seek out the side missions.

While the levels are relatively small, they all have several optional quests you can undertake to unlock achievements or simply get a few laughs. These can range from uncovering pop-culture memorabilia on the beach with a metal detector, slicing up fruit being tossed at you by a woman who looks like Carmen Miranda but soundsÂ like Rita Repulsa (voiced by Jim Sterling), spraying bystanders with a pheromone that causes them to get attacked by pigeons, or playing Spin the Bottle with an attractive woman only to have a crazy homeless man butt in and deliver the kiss she was supposed to give you. Close exploration of the environments will open up smaller optional games like a Space Invaders clone played with microscopic organisms, a version of Frogger where the frog shows progressive bodily injury every time it’s run over, a game where you play as a cat trying to damage as much around the house as possible in a minute, and a short first-person adventure where you fend off pizza zombies with a rolling pin and pizza cutter. 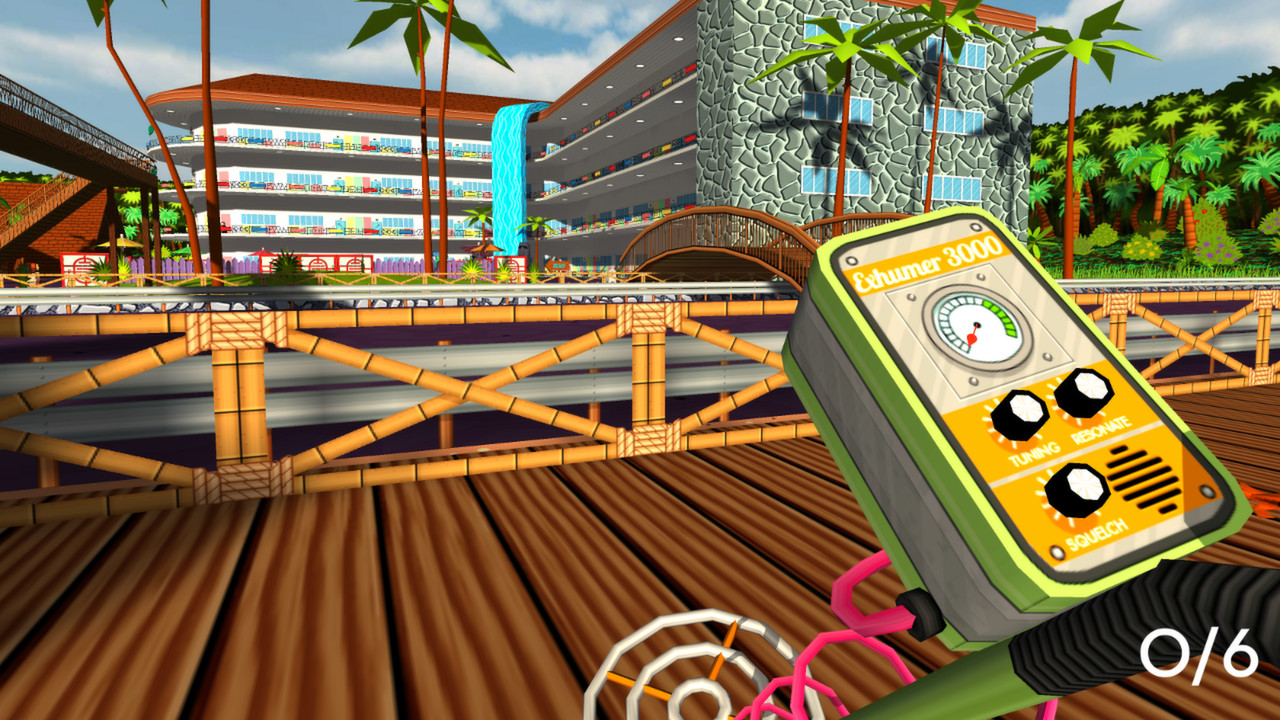 The art design draws from the pop culture of the 60s with a heavy psychedelic influence. Buildings are designed with a retro-futuristic/googie style, robots and cyborgs look as if they stepped out of a low-budget science fiction series, the levels rely heavily on bright or neon colors, and every character has the same base model which makes them look like the symbol on a restroom door. Appropriately for its name, Jazzpunk boasts jazz-inspired music which sounds like an up-tempo noir theme. A few public domain tracks have been added for scenes where they’d be appropriate to add to the humor, like Flight of the Bumblebee queuing up when you try to swat flies, or Korobeiniki (the theme song from Tetris) playing once you enter the Soviet Consulate. 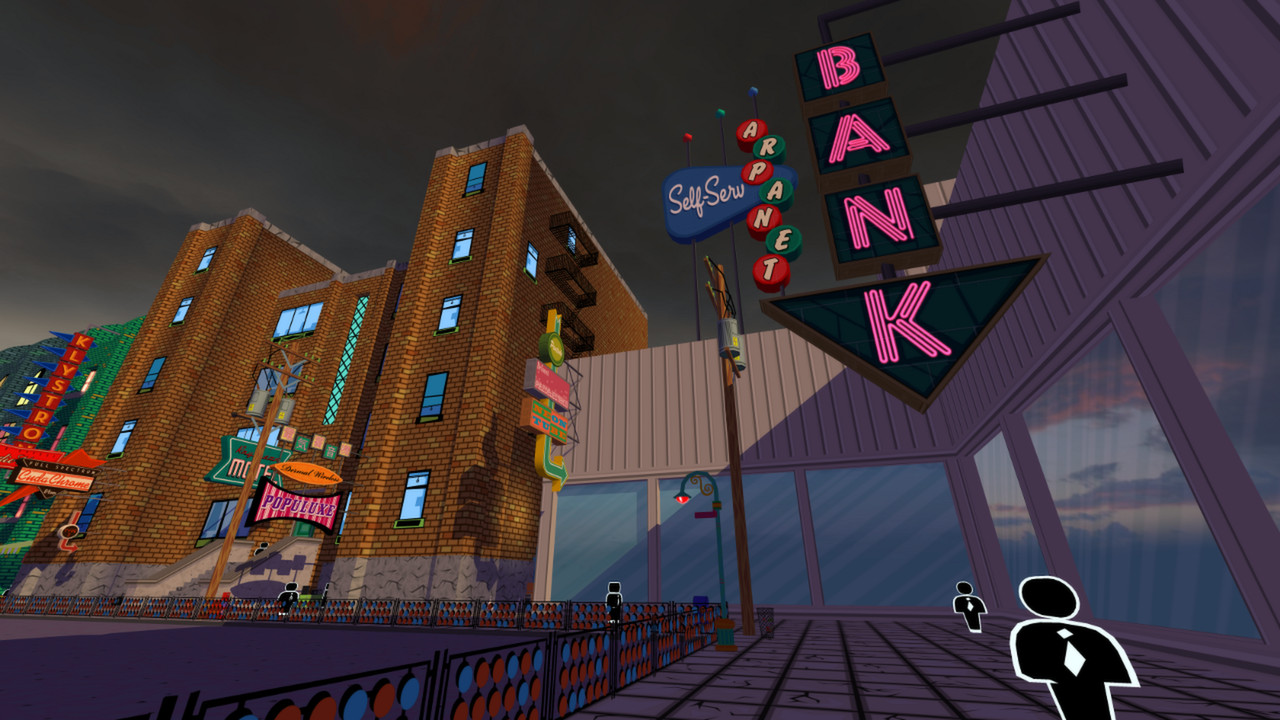 Simply put, Jazzpunk is the funniest game I’ve played since The Stanley Parable. Â I’m confident anyone else who plays it will get a lot of laughs out of it as well.