Aside from doing Music and Films, Rob Zombie has toured the Hand Drawn world. He has often created several Comic Series spanning over the mid 2000â€™s as well as occasionally doing bits of animation. In 2006, he started working on his first animated film which was based on one of his comics called The Haunted World of El Superbeasto. The comic only had one issue and was filled with, as he said in an interview, Any Goofy Idea that came into his head. It was eventually made into an animated film two years later sharing the same title.

El Superbeasto (Tom Papa) is an exploitation actor/director who often fights crime, mainly when he feels like it, and is often helped by his sister Suzi-X (Sherri Moon Zombie). One day, while visiting a local bar, a stripper by the name of Velvet Von Black (Rosario Dawson) is kidnapped and taken to Dr. Satan (Paul Giamatti) who plans on marrying her since she bares the Mark of the Devil on her butt which will help him take over the world.
So, he decides to rescue her, mainly for personal reasons, while his sister is dealing with a group of Nazi Zombies lead by Commandant Hess (Rob Paulsen) who is chasing her since she stole Hitlerâ€™s Head.

If there’s one thing that’s easily noticable from the very beginning of the film, it’s that this film is extremely random with its plot. Given that, as Rob Zombie stated, the film is filled with any idea that came into his head, it’s not surprising that this is completely filled with a lot of different plot elements as well as having tons of references thrown in. There’s a lot of plot elements that have been used many times over as well as some odd ball scenes that would be used in a Raplh Bakshi movie. It’d rather bizarre but also rather unique. So, I guess it’s got that going for it.

The Animation in the film was actually completely different from what I expected. The first time he worked on animation was the Hallucination scene from Beavis & Butthead Do America, so I basically went into this thinking that it would share the same style.

As it turns out, it ended up looking a lot like an episode of Ren & Stimpy which I thought was a bit disappointing considering I thought the B&B Hallucination scene looked cool. Never the less, the animation looked good, regardless of all the boobs and violence throughout. 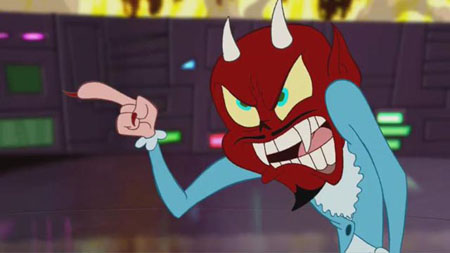 Much like all of Rob Zombieâ€™s films, the characters are very strange and bizarre. El Superbeasto is a bit laid back and doesnâ€™t care for much aside from girls and he doesnâ€™t have much else to him. Suzi-X barely has a personality and mostly just fights Nazi-Zombies with her Robot, (whoâ€™s attracted to Suzi) Velvet just swears in almost every line of dialogue, and Dr Satan is basically every typical evil scientist villain except with a minor backstory and Paul Giamatti’s voice. (I bet his first evil act was to destroy every bottle of Merlot.) So I guess some of them are a bit odd, but most are just dull and weird.

Another odd thing about this movie, is the songs sung throughout the film. They were written by Hard ‘n Phirm and are obviously added in for some comedy in the film. I liked one of them, although I thought the rest of them were a bit odd for me. So I’m left with mixed feelings toward them.

Final Thoughts: I didn’t really care for it. It was strange, diiferent, and it pretty much was what alot of people I know think of a Rob Zombie film. I felt it was just a film I could watch once and I’d eventually forget about it. (Which I find odd considering I fond the other three films for this month more memorable.) So, with that being said, Zombie Month draws to a close and I have the Holly Jolly holiday of Christmas to look foward to now. (Especially with a certain Martain themed Holiday film.)