Such a foggy sight it was. Baring the sky in a muted hue of navies, lilacs, hoarier, and ashes, blend is a hypnotic to eyes. It was as if, it was ripping away the dread yet reminds what brought it forth into mending and tearing the seams.

A summer chilled autumn could prickle the skin raw in a pale blue tint if out for too long, but the ways of the woodland is hard to tread away from. The mossy barks of trees, so few, but sturdier to lean on if knees give way, to where the tiny bloomers to soften the collapse.

That pliable bless of jade blades, clash as waves when the breeze struck through the maze of the woods.

Dirt and stone, do not all but leave a scar their way through the grass, leaving a path, nor of it is it just one, but many. Of how many, itâ€™s hard to tell from the length of it all. Yet, the small and withering growth of leave ways, go on just as far as the foremost.

There is pine, sweet dew, rain, and some kind of fruit, a red berry like cherries or plums, so faint, it could be blackberries or huckleberries of tartness, but there, just as clean as well with the rain washing them.

With the pine and sweet dew of a dance below a foot step away on so aroma that tickles like a newborn kitty paw. Again for so, that fog still so thick, it dampers the care the forest holds. An intermittent light of fair, dreary and coffee rocks become a steady place walk on, as the path goes up hill.

Wasteful it would be, if gone this far up, only to slip downward into the miasma.

Another breeze picks up; enough to rustle the birdsâ€™ conscious into song, by of briny yellow pale stomach finches call from the tree tops, for the solid coated bluish-nave geese arise with green neck salty belly ducks rush out of the tall, cattail grass.

Cause from a twig snap or a lose peg of a rock crackling against its siblings.

If a howl is heard, it would best to run if needed, except for now, onward is the best bet.

Excel through the dusk, freedom is there, and the borderline of city and woods thin out, holding nothing against a soul.

Just leading to be forevermore, of a distance memory, that started as a nightmare, became a nightmare, formed into a emotion, mixture into an sense, leaving nothing else but a thought that just came and went.

Through the Dusk by Bob Russ

Year when made; unknown 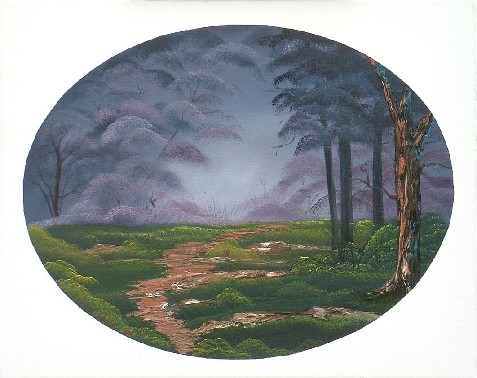