CALLING OUT HATERS: What Iâ€™m Thankful/Not Thankful For Vol. 3 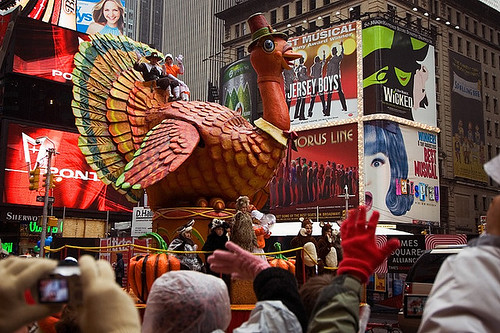 Unfortunately the turkey became sentient and started shooting lasers into the crowd.
“Thanksgiving Day Parade” by martha_chapa95 on Flickr
Protected Under: Creative Commons

Keeping the annual tradition of What Iâ€™m Thankful and Not Thankful For this past year. Since I will be working on Thanksgiving, I thought I would get this out a little earlier. Re: my political rants, and I have been meaning to write about a lot of these subjects as their own blog, but just didnâ€™t quite have the energy to do so, trying to write a political blog without shooting yourself in the foot is hard work. Well hopefully youâ€™ll see these as a nice alternative.

Iâ€™m Thankful For The LEGO Movie

Iâ€™m Thankful for Captain America: The Winter Soldier and Guardians of the Galaxy

Iâ€™m Thankful for both Interstellar and Big Hero 6 having largely positive messages about people who pursue science.

Iâ€™m Not Thankful for those in society still treating science as like the boogeyman, especially when it comes to climate and impacting the environment in general. I guess we should just ignore the drought California is going through, spills that have been happening across the nation or politicians being paid off by corporate interests to deregulate environmental protection, push laws to tear up national parks and build a very bothersome oil pipeline. *rant over*

Iâ€™m Not Thankful for not enough people watching it

Iâ€™m Not Thankful for Nickelodeon fucking the show over by making them exclusively online.

Also Not Thankful: Nick screwing over Teenage Mutant Ninja Turtles (2012) for making the brilliant decision of having the last episodes of Season 2 online almost a week before they aired on TV

Iâ€™m Not Thankful for no longer having HBO

Iâ€™m Not Thankful for when something gets removed from Netflix before I had the chance to watch it. Also Iâ€™m a big procrastinator, havenâ€™t watched much in the past couple of months.

Iâ€™m Thankful for â€œToo Many Cooksâ€

Iâ€™m Not Thankful for â€œToo Many Cooksâ€

Iâ€™m Thankful for Bayonetta 2 and the new Super Smash Bros.

Iâ€™m Thankful for Xbox One seemingly finding their footing, as much as the PS4 is superior, itâ€™s nice to have healthy competition.

Iâ€™m Thankful for finishing The Last of Us

Iâ€™m Not Thankful for wasting my time on Advent Rising

Iâ€™m Not Thankful for #Gamergate. For being so diverse of a movement (I wonâ€™t doubt with the whole #NotYourShield thing) it keeps on pushing anti-feminist agendas and has little to no understanding about gender politics or even how journalism works.

Iâ€™m Thankful for LANDING ON A FREAKING COMET! F-YEAH SCIENCE 😀

Iâ€™m Not Thankful for humanity thinking Kim Kardashian showing off her bum was bigger deal.

Also #Shirtgate. The reaction to the scientistâ€™s shirt might be a little overblown, but he still apologized for it (Though some say â€œhe was bullied into itâ€). I really am sick of those that treat people being upset by a T-shirt like itâ€™s the complete reason why Feminism is dead. Sorry but there is a big difference between when a woman dresses sexily and when a piece of art does, the latter doesnâ€™t speak. The fact a woman made the shirt doesnâ€™t really change that much, Bayonetta was designed by a woman but does that make the characterâ€™s design exempt from criticism? Not really.

Iâ€™m Thankful for Butts, and people who are comfortable flaunting them.

Iâ€™m Not Thankful for how media and misogynistic scumbags treat people for the basis of having big butts.

Also Not Thankful For (But not as much) Having earworms as a side-effect from listening to butt songs. Yes, I know youâ€™re â€œAll About That Bass.â€

Iâ€™m Thankful for progressive policies like gay marriage and better pay being more accepted by the public.

Iâ€™m Not Thankful for regressive politicians somehow being elected back to office. I get the strong feeling it wasnâ€™t completely the American publicâ€™s fault with all the talk of gerrymandering and trying to push Voter ID laws.

Iâ€™m Thankful for soldiers not being sent out to war.

Iâ€™m Not Thankful for the fact weâ€™re sending drones instead. Drone strikes are still warfare.

Iâ€™m Thankful for the situation in Ferguson showing awareness police brutality and abuse of force, especially towards minorities and violating the pressâ€™ first amendment rights.

Iâ€™m Not Thankful for the abuses still happening period. As well as those who still defend abuses of authority and call any Ferguson resident who protests it thugs, even those who donâ€™t even incite violence. Also the fact Darren Wilson didnâ€™t get questioned for his unlawful execution of Michael Brown sooner. Yes, I said unlawful execution, by many accounts there was no reason for Brown to have been shot to death.

Iâ€™m Thankful for having a well-paying job

Happy Thanksgiving, and hopefully the turkey you consume doesnâ€™t bite.