So last year, I did reviews of both animated Titanic movies, Titanic: The Legend Goes On, and The Legend of the Titanic.Â  I more or less covered what I felt were the main problems with both movies in those reviews, as I analyzed them both as films on their own merits and as films about the Titanic.

However, there’s a lot of points that, in order to keep the reviews from being too long, I had to leave out or just make brief mention of. At least some of these points, I felt, needed to be elaborated on further. So here’s my Top 12 Dumbest Animated Titanic Moments.

12: The huge cast of characters in Titanic: The Legend Goes On.

Titanic: The Legend Goes On has a HUGE cast of characters. Not only do we have the romantic leads of Angelica and William, and their families, but we’ve got Corynthia Meanstreak (however you spell it) the jewel thief/Cruella de Ville knockoff and her Jasper and Horace knockoff henchmen, Sam Bradbury the detective who’s supposed to be pursuing those jewel thieves (but doesn’t really get anything done about them until the epilogue), Molly the singer and her dalmations, the mustached man named Gaston who’s attracted to Molly, the American Tail knockoff immigrant mice, the cat and chihuahua duo who menace them, the Mexican mice, Fritz the dog (and his rapping alter-ego), and a whole bunch of other human and animal characters who are rather forgettable. Some of these characters seem to be in the movie solely because the makers wanted to squeeze in as many knockoffs of other animated characters as possible (in much the manner of the Seltzer-Friedberg so-called parody movies).

As a result, the makers of the film clearly wind up with more characters than they know what to do with. Many of these characters aren’t given enough time to develop and become memorable on their own merits as characters. Some have very little personality to speak of. There are subplots competing for time, and most of them don’t go anywhere.

11.Â  Rachel’s sister in The Legend of the Titanic

Speaking of characters the makers hadn’t a clue what to do with, we have the even more pointless Rachel’s sister from the other animated Titanic movie. Rachel is, of course, Elizabeth’s evil stepmother who wishes Elizabeth to be married to the obviously evil whaling tycoon Everard Maltravers, and later conspires with Maltravers in his insane plan (more on that later).

But along with Rachel comes her sister, who contributes absolutely nothing. She is nothing more than a clone of Rachel, and only speaks twice in the film. Even then, it’s mostly in unison with Rachel.Â  Why is she there? What reason is there for her to exist? Was she part of some subplot that was cut for time? If so, that would explain a lot — including the presence of her and Rachel’s cats who ALSO don’t do anything (despite the mice briefly mentioning that rich people’s pets are mean so stay away from them).

At least the chihuahua and cat duo in Titanic: The Legend Goes On got to be antagonists in the animals’ subplot. But here, the only antagonists needed are Maltravers, Rachel, and the butler Jeffries. And the gang of sharks (more on them later). Even then, it’s debatable whether or not a Titanic film really needs villains when the iceberg is enough of an antagonist already. But if you’re going to include villains, at LEAST have them do something. Rachel’s sister (as opposed to everyone else mentioned in this paragraph) doesn’t do anything.

10.Â  The repetitive dialogue in Titanic: The Legend Goes On

In addition to questionable animation quality, Titanic: The Legend Goes On also has a lot of redundant and repetitive dialogue. The phrase “We’re on a boat in the middle of the ocean” gets repeated several times, for example. This is especially glaring in the longer version. The worst would be when, during the sinking, a crewman bars the passengers from rushing the lifeboats saying “You can’t go through here. Don’t make me resort to violence.” over and over again — in the same voice clip. It’s as if he’s a malfunctioning Audio Animatronic or something. Seriously, it’s another sign that the makers of the film just didn’t care, and were only trying to cash in on the then-current Titanic craze.

So let me get this straight: Maltravers’ plan is to first marry the Duke of Camden’s daughter Elizabeth so he can get whaling rights to areas of the sea that are under the Duke’s protection. When that fails, he and Rachel decide to force the Duke at gunpoint to sign over the whaling rights (as well as a last will and testament leaving his wealth to Rachel), and then sink the ship with the Duke on it. Apparently, that last part must have been planned a long time in advance, seeing as clearly Maltravers made the alliance with the evil gang of sharks some time prior to the events of the movie. But why go to all this trouble? Weren’t there simpler ways of getting the Duke out of the way (and covering his tracks) that didn’t involve also killing hundreds of people who had nothing to do with the whole whaling deal?

Why? It’s because Maltravers is evil, of course. And speaking of characters who are obviously evil, that brings us to…

8. The evil gang of sharks

Really, an evil gang of sharks. Who have striped hats and prison numbers.

And whose leader is Mr. Ice (aka Icy Incisors), who says he and the boys are ready to destroy anything, any time. It’s at this point that we KNOW the film’s going to be really bad. Forget for a moment that this is a film about the Titanic, this whole thing doesn’t make sense. When did Maltravers form an alliance with a gang of sharks? When did his butler gain the ability to speak to them? WHY DO THESE SHARKS HAVE PRISON HATS AND PRISON NUMBERS? Aaaagh! The Plot Hole is getting bigger as I say this!

7. The “death” of Camembert

Ah, Camembert. This older sailor mouse colleague of Top Connors is introduced fairly early on in the film, but then mostly disappears until he’s needed again in the disaster. Top Connors finds him during the sinking because they need his help to fix the telegraph wires (otherwise the Titanic won’t be able to send the distress call). So they try to put the ends of the wire back together, only to find the wires won’t connect.

But Camembert knows what to do. He tells the other mice to tie the ends of the wires to his mustache, so the telegraph signal will pass through his mustache to the rest of the wire. He does this, and his nose flashes as the signal goes through. It looks like this is being played for cartoonish sight gags … but then Camembert is not moving anymore. The mice are saddened, and Top Connors tearfully calls Camembert a hero.

And then at the end of the movie, Camembert shows up alive and well, with no explanation. He was apparently electrocuted, his body was left behind to sink with the ship (meaning that even if the electricity only stunned him, drowning or hypothermia should have finished him off), and somehow survives all that and is brought to New York by the dolphins and the whales? There’s no explanation for it whatsoever, aside from the makers of the film (or the older Top Connors if you go by the Unreliable Narrator theory) softening things for the sake of the kiddies. If only this were the worst example of that in this movie, but alas it’s not.

6. The overly cheerful Where Are They Now Epilogue in The Legend Goes On

While we’re on the subject of softening things for the sake of the kiddies, we shouldn’t let the other film get a free pass. Maxie the young immigrant mouse (the one who got saved from being ‘in someone else’s digestion’ early on in the film) breaks the fourth wall at the end of the movie and says “Where are you going? The movie isn’t over yet. Don’t you want to know what happened to everyone?” The fourth-wall breaking part isn’t the dumb part — compared to the other dumb things in that movie alone, it only deserves an honorable (?) mention on this list.

No, the dumb part is the cheerful tone the mouse gives as he describes what the various characters did after the disaster. He describes how Sam Bradbury was rewarded for nabbing Corynthia Meanstreak (even though Bradbury seemed like a hopeless incompetent in most of his scenes), how the mouse and his family were granted a new home in a New York restaurant by the chef whose life they saved, how the stepsisters married Corynthia’s henchmen Kirk and Dirk (who think they’ve got it made, and it gives them something to do with their boss in jail) and how William and Angelica adopted the dalamations and were married. He concludes with “Here’s hoping they live happily ever after. See you soon!”

He barely even mentions the disaster at all, aside from mentioning that the dalmations lost their original owner in it. Aside from that, the sinking of the Titanic and the 1500 or more lives that were lost is just swept under the rug. All in the name of making a Lighter and Softer Titanic movie that the kids could see. It’s insulting to kids, to adults, and to those on board the Titanic. But that’s NOTHING compared to how The Legend of the Titanic handles the disaster.

But we’ll get to that later. 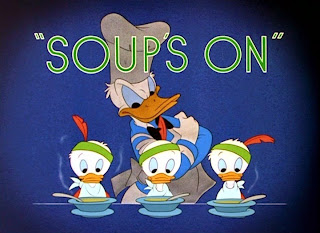