The Magic of Storybrooke: Family Business 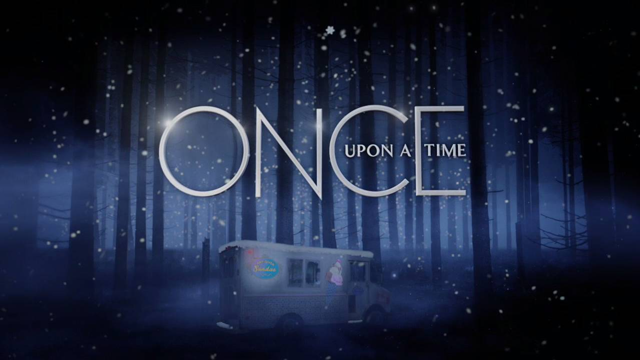 Hello & welcome back to The Magic of Storybrooke and today, we need to deal with some family business.

Surprise, Elsa and Anna are truly related to The Snow Queen but even more then that, we delve into Belle’s past and learn what her life was like before she met Rumple.

The ogres are coming, the ogres are coming. Yes, the flashback this season takes us back to the first ogre war. A changing point in the history of The Enchanted Forest and we see Belle’s mother for the first time trying to protect the books, only for her to be killed by an ogre and Belle has no memory of how her mother died and decides to head to Arendelle as she knows that she can find a way to restore her memories there with the help of the rock trolls. 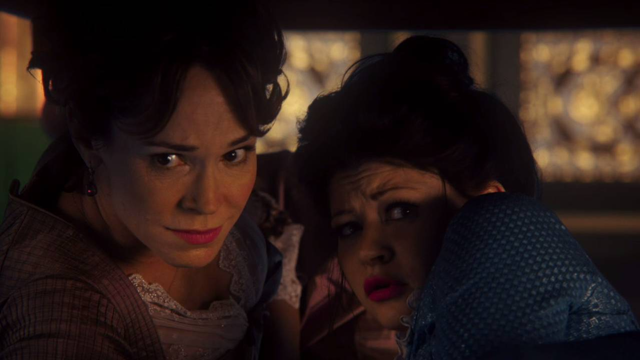 Belle finds out about the kingdom of Arendelle through a map in one of her books and going against her father’s wishes, she heads to the kingdom. Meanwhile, back in Arendelle Anna arrives back at the palace and isn’t ready just yet to tell Elsa the truth of what she learned of their parents as she observes that Elsa has learned to control her powers, thanks to the aid of The Snow Queen, who claims to be their aunt but Anna doesn’t exactly trust her and decides after talking to Kristoff that she needs to head off to see Grand Pabbie to learn the truth and along the way, she crosses paths with Belle at Oaken’s Trading Post. Yoo-hoo. Would you like to try the sauna? 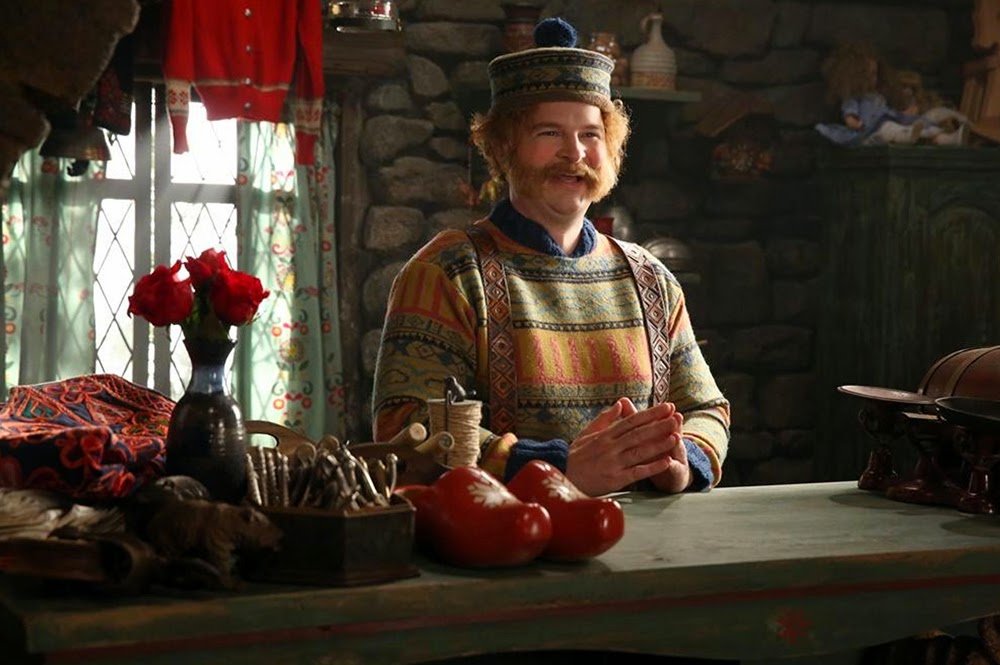 And after overhearing of Belle’s complications, Anna offers her help as she knows the way to the rock trolls and we see the two walk and Anna use one of Belle’s pic axes to try and climb but falls stating that Kristoff makes this look easy and as she falls, the hat falls out of her bag and Belle wonders what that is and without saying his name, Anna tells Belle of her encounter with Rumple. As we see the two get to the rock trolls, Grand Pabbie pulls something magical from Belle’s mind and creates a memory stone that is to be drank with tea and it will restore memories of what happened to her mother. And meanwhile Anna wants to know the truth about her aunt and we learn that Elsa and Anna’s mother had two sisters but any trace of them had been erased from Arendelle’s memory after the two other sisters just vanished and as the two leave, they hear a noise and see a storm coming and Anna realizes that it’s her aunt and Anna tells her not to worry as she can use the hat to take her aunt’s magic but it is not to be as Anna falls onto a cliff and Belle has to save her but she goes to save her, the memory stone falls and Belle now must choose between Anna or the stone but the stone smashes and breaks and as Belle goes to grab Anna to bring her up, The Snow Queen shows up and takes Anna and traps her away as she believed that she was going to use it on Elsa.

And it’s here we learn that Belle blames herself for the disappearance of Anna as she chose the memories of her mother over saving Anna from The Snow Queen. We later see her back at her father’s palace stating that they need to call upon The Dark One for aid in The Ogre War.

Anna is a good judge of character

Anna: I’m a good judge of character.
Kristoff: Says the girl who agreed to marry Hans 10 minutes after you started talking to him.
Anna: I was young and naive!
Kristoff: You met me the next day.
Anna: Younger.

This was such an Anna moment that made me laugh and chuckle pretty hard as this scene got Anna down pat and this is just further convinces me that the show has perfectly figured out the character of Anna.

Now, onto the Storybrooke plot.

We start with Belle answering a phone call from Emma saying that she wants to see Gold at the sheriff’s station and there we see them watch the video of Emma’s time under The Snow Queen’s care as a foster child. Emma believes that The Snow Queen may have erased her memories of that time. David then advises that they break up and search for her and Henry suggests that they check her ice cream truck. Belle and Elsa team up and we see that this troubles Belle because of her past with Anna and she has been keeping this a secret for years. We see our group of heroes now teamed up with Robin Hood and the merry men coming up to the ice cream truck and we see them break in and there they find that The Snow Queen has been keeping files on Emma since she first arrived in the land without magic. Regina and Robin have an encounter and Regina explains that she cannot save Marian and that Robin needs to learn all to fall in love with his wife again. Gold comes across The Snow Queen and tries to make a deal and warns her to be careful, if he doesn’t. We see Belle and Elsa going through the library to see, if they can find anything on Anna but she isn’t sure, if anyone knows whether or not Anna is in Storybrooke. We see the guilt eating at Belle and she decides that she needs to head to the Snow Queen’s lair to retrieve something that she has. When Gold learns of this, he refuses. Which leads to one of the most dramatic moments in the series. Belle uses the dagger on her husband and once they find it, Belle goes looking for the hat but she doesn’t know that Rumple already has it. There, she is attacked by her reflection in a mirror as it is the personification of her guilt of not saving Anna and the doubt of Rumple giving her a fake dagger. You can truly see how this gets to her and it is just so haunting as Belle is so helpless being attacked with her worst fears and being referred to as a coward. 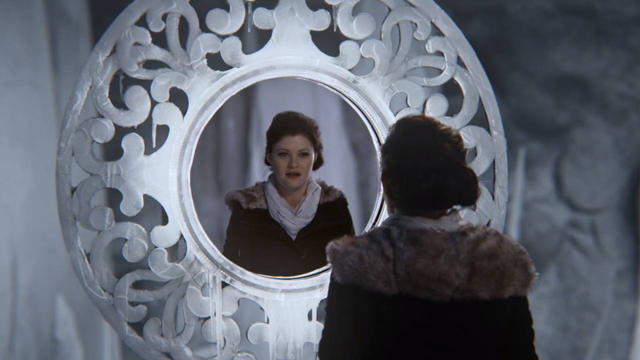 Rumple comes in and saves his wife from the torture of the mirror and back at the pawn shop, we see Belle admit the truth as to what happened to Anna and this is just painful as we know that Rumple is still keeping the dagger a secret. We later see Gold confront The Snow Queen back at her lair as she threatened his wife and you do not threaten someone he loves. He shows that he does have leverage, referring to their earlier talk as he reveals the hat. The Snow Queen’s presence is later discovered in a family album that Elsa and Emma had come across and there they find a prophecy stating that a savior named Emma will become Ingrid (The Snow Queen’s) sister. Belle reveals that she knows what truly happened to Anna but doesn’t know where she is now. She also reveals that The Snow Queen has a spell that could turn the town against each other until only The Snow Queen, Emma, & Elsa are the only ones left.

This was Belle’s story through and through and it was so nice to have a Belle centric episode again. And this really where we got see her at her most vulnerable as she questions herself and the guilt of not saving Anna is just eating at her.

The interaction between Anna and Belle was just so entertaining and so funny. You could see how much these two connected over the loss of a parent and that they were truly there for each other and when Anna was taken by The Snow Queen, you were just scared for her.

The Snow Queen done goofed by threatening Rumple’s loved one. She’s just made it on his hitlist, I’m sure. I just have to wonder what’s going to happen now because of that.

With the new prophecy, it’s clear that Elsa coming to Storybrooke last season was no accident. The Snow Queen has been orchestrating this for some time now.

What I said about Elsa can also apply to our savior as well. Though, it does seem more stalker-ish with her having so much information on Emma. What is her infatuation with Emma? Because it seems to go deeper than just being her foster mother for such a small amount of time. She had to have been seeking out Emma and we know that because of the prophecy but there has to be more to it than that. Part of me thinks that she is trying to recreate the family that she lost.

The Snow Queen is slowly rising as one of the creepiest villains and giving Pan a run for his money as a really creepy villain. Her intentions are interesting, trying to create the perfect family and she just happened to choose two girls like her that both have magical powers. And I have to wonder if them being blonde has anything to do with her wanting to create the perfect family.

All in all, this was a pretty good episode and one that really built upon the character of Belle well and actually gave her something to do. Join me next time as we learn more about…