Back in 2013, Hasbro took a rather risky move with the My Little Pony franchise by giving it a Spin off film for Friendship is Magic, but they gave it a bit of a twist on the plot.

It was a move that Intrigued, Shocked, and Upset all at the same time as well have many Bronies leave the fandom and forget about the show. Thankfully though, it was as bad as it originally lookedâ€¦although there is one part of it that still pisses me off about itâ€¦ (I give you a hint; it begins with â€œFlashâ€.)

So, a sequel to Equestria Girls was almost inevitableâ€¦although what they did with it was not expected by anyone. 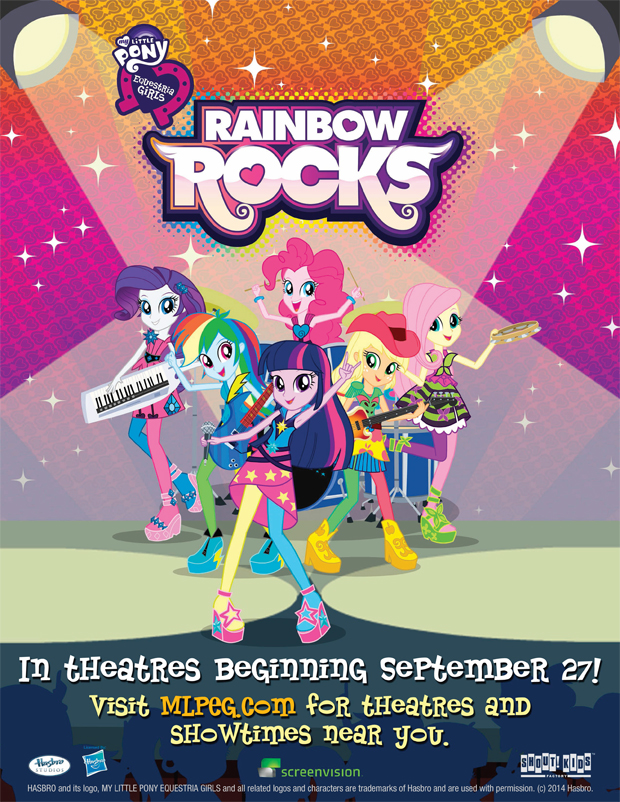 Being the type of person who usually gives anything a chance, I was at first neutral toward the whole idea and waited until more elements of the film were introduced and I have to admit, I liked what was being released so far. So, since I was stuck waiting for it to eventually come out on DVD, I finally got the chance to check it out and Iâ€™ll share my thoughts on it with you today.

Set a small amount of time after the events of the first film, Canterlot High is having a Musical Showcase which has caught the attention of everybody in the school. It also caught the interest of a trio of new students called the Dazzlings who contain supernatural powers and have turned everybody in the school against each other. Having no one else to help them against the Dazzlings, the Human Mane Six along with the newly reformed Sunset Shimmer have decide to ask the one person they know whose had experience with Magic, Twilight Sparkle.

So with Twilight back in the Human World, along with Spike for some reason, they have decided to take down the Dazzlings in the Music Showcase, which has turned into a Battle of the Bands, and save Canterlot High from them in the process.
I have to admit, the first thing that caught my attention for this film was the Dazzlings.

Shortly after the preview clip of one of their songs came out, I pretty much knew that I was going to see the film. It was rather cool to get a species from Greek Mythology thrown in the franchise again plus it was a bit fitting that they were Sirens since they immediately reminded me of the river scene from O Brother, Where Art Thou. There scenes were a bit similar to the Three Stooges at times (without the slapstick) and I have to admit, I liked them as villains a lot more than Sunset Shimmer in the first Equestria Girls film. Overall, they ended up fairing as one of my favorite parts of the film. (Although they didn’t do very much in the film.)

Speaking of Sunset Shimmer, she didnâ€™t get as much involvement as I thought. Obviously, after the events of the first film, everyone is mad at her for turning everyone into zombies and trying to take over Equestria. Although the Mane Six trust her and she does want to help them, she does almost nothing in the film. They rely more on Twilight to help instead of the OTHER BEING FROM EQUESTRIA WHO THEYâ€™VE BECOME FRIENDS WITH which ends up having an extremely stressed out Twilight. She does end up helping them in the battle against the Dazzlings as well as providing some Moral Support, but thatâ€™s pretty much it. I do think that it was interesting seeing her as a protagonist in the film, even though she doesnâ€™t do much, and it makes her a bit more likable than the first film.

The one thing I was actually a bit surprised at was the lack of Flash and Twilight sharing the screen together. They do talk to each other a couple of times but Flash is mostly against her since he was under the Dazzling’s spell which made him a bit of a Prick. That really doesn’t change my opinion of him, but I still think he has absolutely no personality and I still don’t like him very much.

With the film being about a Musical Showcase, we obvious get lots of songs. The majority of the songs are sung by only the Mane Six and the Dazzlings. With it being about a Battle of the Bands, I was expecting to hear some other songs that would be by some of the other characters. The others who sung in the film were Trixie and Snips and Snails. We do get treated to a montage of the competition which has Lyra & Bon-Bon doing a Piano Duet, The CMC probably doing their Theme Song, Flash Sentry and his bands, and many others but theyâ€™re overdubbed by a song by the Mane Six. Iâ€™m okay with the Mane Six doing a song, but I would at least wouldâ€™ve have liked to have some more variety in the Song department.
Of course, they have the â€œShake Your Tailâ€ song from the trailers, but the scene is completely different from the animated Music Video made for it. The majority of the songs by the Mane Six were alright, but I think that the Dazzlings got the best songs in the whole film. Especially the â€œLetâ€™s Have A Battleâ€ song which ended up being my favorite in the whole film.

I only had one major problem with the film that really bugged me throughout it, Rainbow Dash. 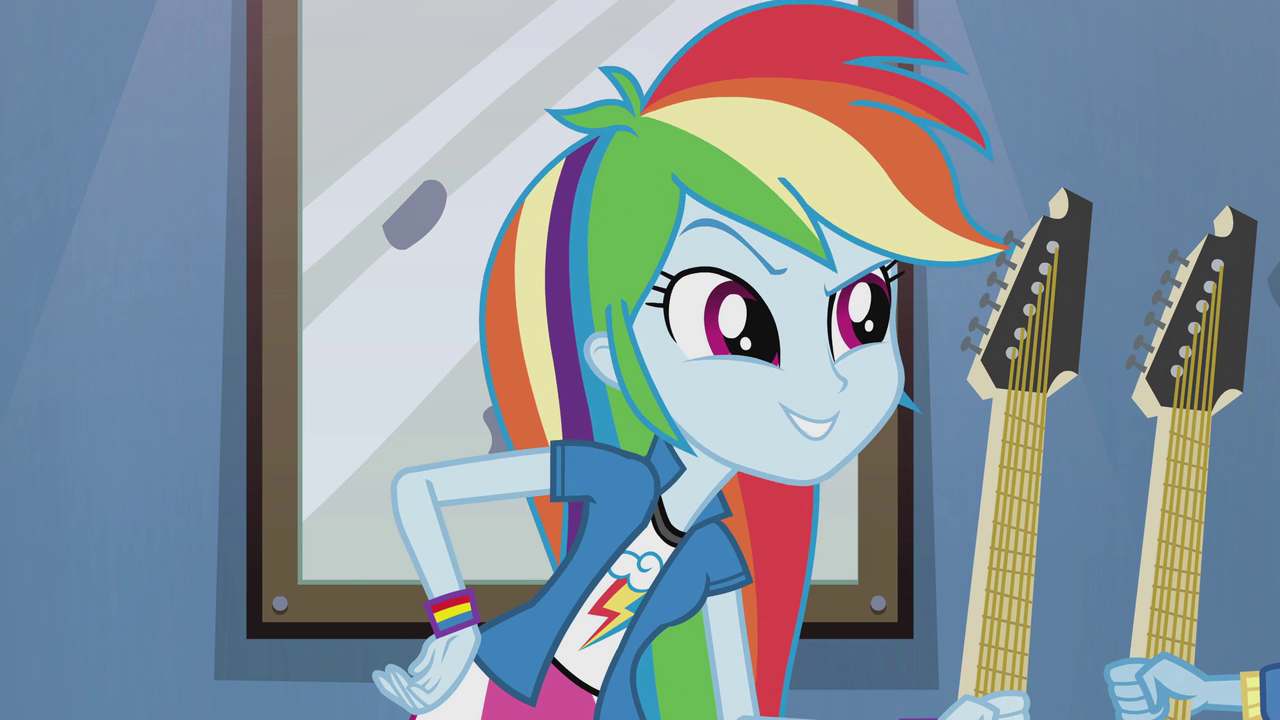 Iâ€™ve mentioned that I canâ€™t stand her at all and this film was actually the perfect example why. She was basically more narcissistic and egotistical than Trixie ever was in anything she was in and just wanted to be the center of attention all the time she was on stage and I absolutely HATE that about her.

I think Vinyl Scratch/DJ-Pon3 was a victim of false advertisement. She was often shown a lot in posters and she got a short for Rainbow Rocks, but in the film she only appeared in the last part of the film so that was disappointing. 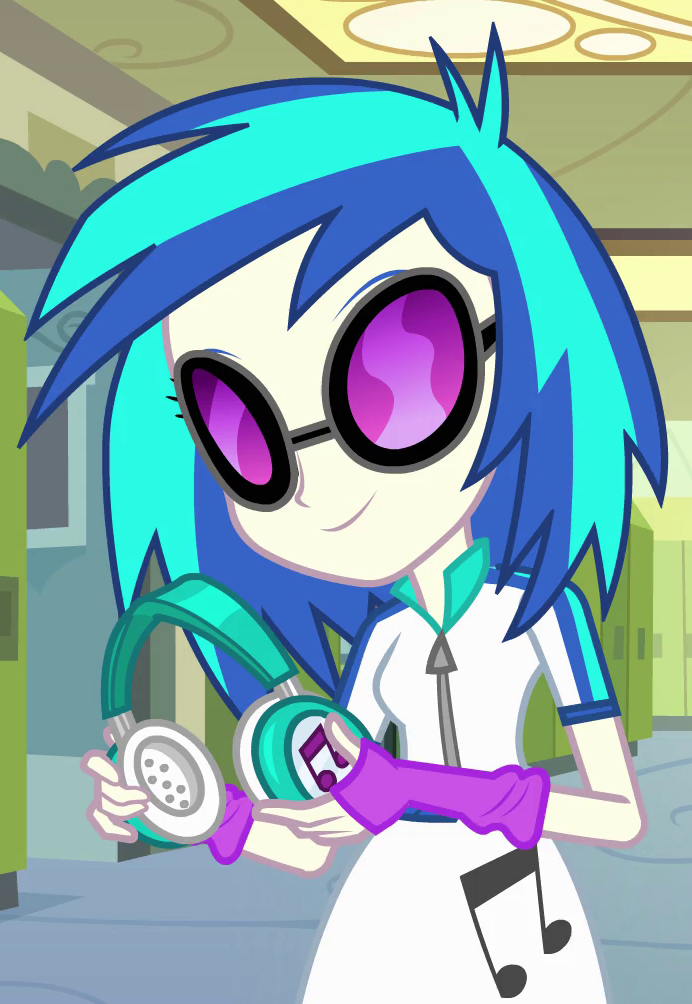 Speaking of minor roles, Spike was utterly pointless throughout the film. In fact, he was barely in the movie at all. He didnâ€™t contribute anything and he really was just there probably just because he wanted to go with Twilight (Maybe he likes being a Dog.) At least, the other Pony Mane Six had a logical reason not to go from Twilight.

Overall, I liked it. With some improvements from the last film (Less Flash & Twilight Screen time, Better Villains) I can say that I liked it a bit more than the first one.

Fun Fact: If you pre-ordered the DVD on Amazon (like me), all the discs that were giving to pre-orders were Defective. Thankfully, they’ll send out replacements.