A subdue night, lit by so of a crackling fire of brimstone mellow scarlet, screaming profound golden, and outstanding light auburn, with flicking shadows dancing through the woodlands, mirror a akin glow by the riverbed.

Long awaiting timbers lengthen their ways, incasing the hidden world below from the harsh colds above.

Solemn autumn coming forth was the night; a brisk coil rustles the shrubs and tall grass. A lone wander, waits near the fire, hat flutters a bit against the winds, unmoved for the most part as it stayed rested on top of the manâ€™s head.

Dark observation of his figure to a ghastly beyond where he couldnâ€™t see, but shows little care of that matter, as eyes lipped with heavy sleep, but holds to wake a bit more. He holds himself close; uncertainness is clear on his face, from a great distance of what lies farther onward to what blank, hallow, spiteful dark eyes could see.

To that quick look, across the riverbed, laid a growing tree. Young in growth along with leaves a vivid shade of pale green. The brown firm bark was well kept and free of termites and rot of age.

Hope rested with that tree, along with the soil of a soul to raise it. Hope was there and strong.

The lone man knows the truth of it all, for what was place under the seed that became a little sapling. How of the manâ€™s lips moved in swiftness with the fireâ€™s shade, speaking to it, of how much of a long before time, to how much that soul meant so much to him: a question that needs no answer, but some will try in hopes of breaking that, spell in accounts of naming it.

Tainted as the farewells were, they lasted beyond that, being far more than just feeble words of letting go.

They became much more, just as all the vegetation before. The meaning to them could not, will never be not come close in telling this manâ€™s fable, that never leaves the woods. This golden world will never speak of it, as the lone shadow man does, in rest in the woodlands, his home forevermore.

His sighs will clash with the strokes of riverbedâ€™s yawps of bagginess to fill the silence, than this muffle of song, he sings to calm a heart filled with cracks and spilling in a sluggish tempo.

Maybe in sow chances, heâ€™ll laugh and join the others. Yet, now, he stokes the fire alive and well, casting in the everlasting fair autumnâ€™s hex.

The man sits by, not as a spirit, but an unspoken reason that needs nothing more than that.

Year when made; unknown 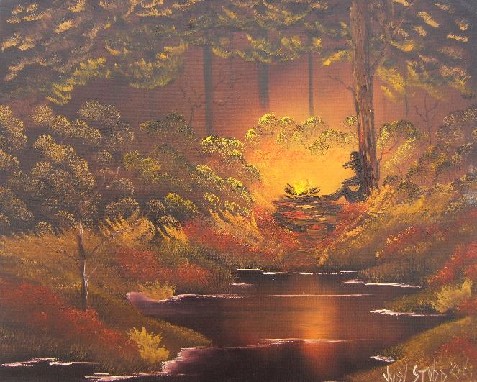 Doing another Thanksgiving Poem; subject is what are you least thankful for and is there a way of how to handle it your way. The numbers for responses are 28. PM me for the due date is on Thanksgiving Day.

Want to do another Paint a Picture Special; who is the artist you like to see? PM me or comment below (Even while is going through one already, it is still open for more requests)

And lastly, know any Thanksgiving themes that can become poem form. PM me or comment below