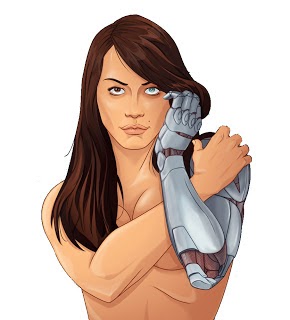 There was no more fun of the feeling of the towel going over my body. No, I only had to concern myself with drying myself off in the quickest manner so I could do other things.

I should have missed feeling human but I didnâ€™t. Samara looked at me and I could tell she felt pity for me because she probably thought that me not really being human anymore was a bad thing. But, to me, it was acceptable. Being human had been awesome but I didnâ€™t feel any pain about being a Machine now.

I looked her up and down as she tied her towel around herself. I could tell that she still had the body that would have aroused me if I had still been human. But I wasnâ€™t human anymore but I still felt interested in her physical features.

â€œHow are you feeling?â€ I asked her as she started to blow dry her hair.

I put my hands around her waist and my head on her shoulder. I took in every detail that I could. I took in her body heat, her blood pressure, and how much water was probably still on her skin. I noticed the fact that I wasnâ€™t feeling her like I once did and didnâ€™t consider that fact important.

â€œThe plan will work.â€ I told her as I was confident in the plan.

â€œBut what if you die?â€ Samara asked and I could see her worry more clearly than I wanted to.

â€œNetty made me to last.â€ I reassured her. â€œI will hold up. But you should worry more about yourself. Youâ€™re more likely to die.â€

Samara turned her head so she was looking at me and said, â€œKarma can fight The Net and Karma will destroy Logic. Youâ€™re not invincible.â€

Yes, Samara was right. I could die. Before I wouldâ€™ve preferred death rather than be what I was now, but now I had found peace with myself. Now I wanted to live so I could bring down Netty.

Besides this upcoming battle, I was worried about something else. Something that was probably nothing, but which I was still concerned with.

â€œIâ€™m also a lesbian.â€ Samara replied. â€œDonâ€™t worry, Naz, Iâ€™m not going to leave you. Especially not for a man.â€

â€œBut will you leave me if you find a human woman you like?â€ I asked.

I knew how much I had changed and knew that it might bother Samara in the future. Did I care about her leaving me? In a way, yes, but I would get over it. A part of me, that remained the most human, didnâ€™t want her to leave me at all. I wanted Samara to stay with me not just because I trusted her, but because I loved her.

My love for her was with me even after I had become a Machine. And now it had just evolved into something that was different, but was still strong.

â€œThere will never be a woman that would make me leave you.â€ Samara said and then we both got quickly dressed.

I got dressed first and evaluated my girlfriendâ€™s fitness. I didnâ€™t want her to go into battle when she could died. I had die and didnâ€™t consider it a good thing to happen. If you survived you would be a Machine and completely different than who you had been before.

â€œAre you ready?â€ I asked her out of politeness as I could tell that she was ready.

â€œYes, letâ€™s go down to meet the others.â€ She replied and we walked quickly to the living room.

I looked at the team that was now in our living room.

Mark was sitting on a chair in his usual cocky manner. He had a look of disinterest but I could tell he was worrying. He was a leader and liked to look in control and unafraid, but he was afraid. He couldnâ€™t hide that from me. When he looked at me he put all of his fears into an angry look on his face that he directed at me.

Stewart was sitting close to Mark and was doing a better job at controlling his fear. He looked at me with his eyes that seemed to care more about examining me than extending real friendship.

Martha and Rebecca, the two sisters, were comforting each other before the big battle.

Kered was still in bed to recover so he wouldnâ€™t be joining us.