Why I’m A Libertarian

Halloween is over, but we’re approaching another day of dread and terror here in the United States – Election Day. Not only will people be voting for midterm congressional seats that will determine control of the House and Senate, but they’ll be choosing who will represent them locally in hundreds, if not thousands, of state and district campaigns. This year is being hyped as “The most important election in recent years,” which I’m pretty sure has been said about every past election since the mid-90s. And it appears as though the major parties are stepping up their game to strong-arm voters into supporting their cause. The New York Democratic party, for example, recently mailed flyers with a vaguely menacing suggestion stating they would be reviewing the voting records to see who participated. 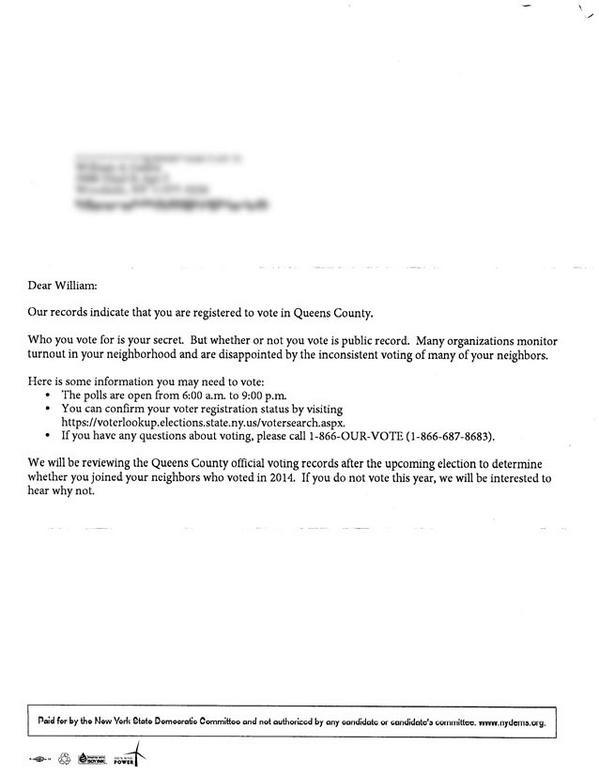 Scare tactics are nothing new, of course. Just look at the countless ads being shown for individual races… on second thought, don’t. It will kill your faith in humanity. It’s quite obvious that the candidates in the two major parties don’t care about the people. They just want us to support them in their power grabs, and aren’t above intimidation to force the public into supporting them. But I’m not scared of either the Democrats or Republicans. I won’t be supporting either of them. I am a Libertarian.

Don’t run, don’t run. We’re not as scary as the media makes us out to be. We’re not racists, anarchists, or wealthy sociopaths… well okay, a small amount are, but you have bad apples in every party. Unfortunately, the extremists have tainted our image, to the point where it’s common to label us as “republicans who want to smoke weed.” Not only is that a bad joke, it’s an intellectually dishonest representation of what we stand for. As the party platform illustrates, we have goals similar to those held by democrats and republicans (Â http://www.lp.org/platform ) … the good ideas. It was learning about their plan for the country that convinced me to join the party.

Let’s go back a little to look at how I became a libertarian. As a teenager, I didn’t follow politics much. I thought everyone in Washington was a crook. I didn’t pay attention to local elections. I didn’t read Doonesbury or Mallard Fillmore. I just wanted to get through high school, live and let live. Then September 11 happened, and I got a glimpse into the true complexities of the world, the real dangers that faced us. When Bush responded by launching the “War on Terror”, I was behind it at first. I wanted the people behind this atrocious murder to pay. I gravitated towards the right, even though I found some of their social policies to be seriously flawed. Why not let gays get married and adopt children? Why imprison people for smoking marijuana? Why let religious zealots dictate national policy? These stances troubled me, and when it was announced that we would be sending troops into Iraq, a country that had nothing to do with the attack on our country, I realized I couldn’t support this militaristic brutality anymore.

For a while, I was adrift politically. I identified as an independent, but the scientific part of my brain demanded taxonomy. There had to be a name that would match up with my goals. Eventually I discovered libertarianism through the usual sources for young people: South Park and Penn & Teller’s Bullshit. Whenever they attackedÂ absurd ideas, took shots against the corrupt hypocrites in power, I cheered them on. I had found others on my side. After that, I became more interested in the libertarian agenda. I watched John Stossel, subscribed toÂ ReasonÂ magazine, learned what I could about the candidates running in my state and tried to support them. It’s yet to prove fruitful here in Pennsylvania, but I’m going to keep up the fight.

So that’s the history of what made me a Libertarian, but why am I still with the party? Because their goals make sense. I’ve always been a live-and-let-live kind of guy, so their socially liberal ideals suit me perfectly. As long as Â you’re not hurting other people, neither the church nor the government should be allowed to dictate your life or punish you for going against what they consider “acceptable.” Let same sex couples raise families, let people use pot for recreational and medicinal use, let women have the right to an abortion if they think it’s the best option. And while this is controversial, let law-abiding citizens own guns. I don’t like firearms myself, but I won’t object to people without a criminal record or a history of mental illness have them for hunting or self defense. Yes, sadly, some people can snap and go on shooting sprees, but lunatics aren’t restricted to guns when they commit acts of violence. Should we prevent people from using knives or operating vehicles because they could both be used to kill people? The issue is personal responsibility – educate people on how to use their personal freedom properly.

I’m opposed to censorship in all its forms. The government has no right to dictate what can and cannot be said in any form of media. I find obscenity laws in other nations to be woefully outdated and contradictory to basic human expression, and dread the idea that such policies may someday crop up in this country. Everyone has a right to speak their opinion, no matter how abhorrent or repulsive, and those who disagree have every right to speak out against them. That is how the marketplace of ideas works, and how progress comes about. Restricting expression or punishing

That takes care of the party’s left-leaning ideals, now let’s move onto the more conservative aspects of the movement. I am not a fan of big government. I hate paying most of my taxes. I’m fine with money that goes to Social Security and Medicare for those who need it, and I don’t have much problem with state/local taxes, even though I wish they could be a bit lower. But it disgusts me to know that my money is being used to build drones that kill thousands of innocents each year, to keep people imprisoned in Guantanamo Bay without any right to trial, to pay the salaries of Congresspeople who aren’t doing a thing to help the lower and middle class. Isn’t that taxation without representation?

While I said that I don’t mind paying for social programs, there’s no doubt they need reform. Social Security is expected to go bankrupt at its current rate. The Libertarian Party has endorsed the idea of allowing people to opt out of Social Security for personal retirement accounts. Critics argue that this will leave retirees destitute, but the concept is already showing signs of success in other nations like Australia and Chile (Â https://danieljmitchell.wordpress.com/2011/01/10/the-case-for-social-security-personal-accounts/ ). What about pointless federal organizations like the FCC, the DHS, the NSA, the DEA, the TSA, departments that exist solely to harass us and restrict our freedoms. Slash their budgets, take away some of their excessive overreach, and put that money towards a better use. Bring the troops home, stop getting involved in pointless international conflicts we have no part in. We’re spending trillions to destroy and rebuild other countries, which is nothing compared to the cost in human lives lost.

This brings me to another point – the “War on Terror” needs to end? What has it accomplished, really? Domestic terrorist attacks have continued even with its draconian policies in place. All it’s achieved is establishing a system where the government can treat everyone like a potential criminal. The NSA is spying on millions of people, collecting personal information they have no right to look at. Police forces are becoming more and more militarized, giving cops an inflated sense of power that they regularly abuse, as we’ve seen far too often in recent months. Hell, the president has a kill list that gives him the authority to execute people without giving them a trial. Is this right? No. And it needs to stop.

Now whenever libertarians discuss financial reform, we always hear the same tired arguments. “Who’s going to build the roads?!” is a popular insult. Well guess what, the private sector IS building roads, and doing a good job at it. (Â https://uk.finance.yahoo.com/news/man-makes-toll-road-to-get-around-roadworks-105822133.html ). There’s no doubt that private industries canÂ improve on many areas where the government is faltering, such as postal deliveries. Don’t get me wrong, I’m not a corporate suck-up. I know businesses exist to make money, and that leads to criminal behavior in several cases. But are we seeing these people get punished, no matter how many regulations are passed? Hardly, because many of our elected officials are in the pockets of big business and write the regulations with loopholes that help the fat cats avoid punishment. End corporate cronyism, and these industries will have lessÂ carte blanche to screw over the working class.

I’m not saying that every aspect of the plan is perfect, however. Health care reform is a complex issue, and I don’t believe the Libertarian platform addresses all of its problems. Insurance companies have Â a tight grip on their customers, gouging them for years, if not decades, and then finding some obscure clause to deny them coverage when needed. More freedom in choosing an insurance provider sounds like a noble concept, but in many instances the other options available don’t offer much better plans. I don’t necessarily agree with a national health care plan like the ACA/Obamacare, as we’ve already seen that people are having their current insurance plans cancelled because it doesn’t adhere to the law. Perhaps the answer lies somewhere as a compromise between the two. Whatever the solution is, I would like to see it enacted as soon as possible.

Libertarianism doesn’t have all the answers. It’s difficult to stop insurance companies from exploiting their customers, to keep big business from exploiting its workers, to reform an education system that isn’t properly preparing students for the real world. But we realize that an effort needs to be made in order to change things. If the current system doesn’t work, it should be reformed. I already mentioned examples of changes similar to the party’s platform working in other nations; why not try them here? If it works, people will benefit. If it doesn’t, we try something new, and I will be among the first to admit I was wrong.

I’m not trying to sway other people into joining the Libertarian Party. Just explaining why I belong to it, and why I findÂ their ideas reasonable. IÂ believe in freedom of choice, and you are all free to support whomever you choose. Just remember that you are not restricted to only two parties. There are other options.