One thing Iâ€™ve always been fond of in the days of my youth was Choose Your Own Adventure books. 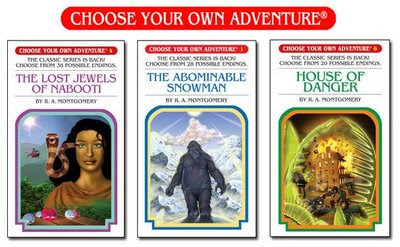 Iâ€™ve always liked reading them and I got pleasure from having the option to choose how the story will progress. Theyâ€™ve constantly gone into different genres throughout the years, although I donâ€™t know if they do them anymore, and have also been incorporated into video game form as well. (The easiest example being The Stanley Parable.) Fortunately enough, I found one such game that follows that type of formula which was made by the MLP fan community called Gem Quest.

The gameâ€™s objective is very simple: You play as Rarity and youâ€™re looking for Gems. You walk in the Everfree Forest and encounter a Cave and thatâ€™s when the game gets interesting.
The gameâ€™s originally intention is most likely to be a Creepypasta game, but with the large amount of endings, it came of more like a CYA game to me. I donâ€™t want to give away too much of it for you so Iâ€™ll just tell of a few of the endings you can have.

#1: As you progress throughout the cave, you eventually encounter a Demonic looking Applejack. You try to avoid her to your best efforts, but she eventually finds you and it is hinted that she kills youâ€¦and of course, a jump scare pops up.

…It’s not very surprising that this happens…

#2: You eventually find your way out of the cave and encounter a blue pony who tells you â€œYou Forgot the Easter Egg.â€ When you go to the Egg, you are then playing as Twilight Sparkle as you fight against a mysterious hooded figure.

The fight itself is almost impossible and youâ€™ll most likely lose, but when you do and you get the different colored egg, you instead fight an Evil Trixie.

I thought it was a nice addition to the game since with anything CYA related, you never know what you’re going to get.

#3: You eventually find your way into a gigantic room with an evil Rarity spirit in it. If you can successfully evade her, youâ€™ll get the rave ending.

Other endings involve Jump Scares so you aren’t really missing much and it will get very repetitive. Plus it also throws the over used Pinkamena character along with Applebloomâ€™s ghost (presumably from Apples Everywhere.) Thereâ€™s also an ending where you can actually escape the caveâ€¦but it ends with a Jump Scare though. I really wish that Creepypasta games didnâ€™t have to rely so much on Jump Scares.

Much like most of the MLP Games that Iâ€™ve played, they are in a 16-bit style which is very common with all of the MLP based Creepypasta games. I donâ€™t really mind it, but I do wish that I could find one that had some higher quality.

Overall, I thought it was OK. The only problem I really had with the game is that I didnâ€™t like having the majority of the gameâ€™s endings being jump scares. I also wish the game was longer. Hopefully Iâ€™ll find a better horror based MLP Game that wasnâ€™t so heavy on the Jump Scares. (I wish it could with the majority of modern horror films as well.)