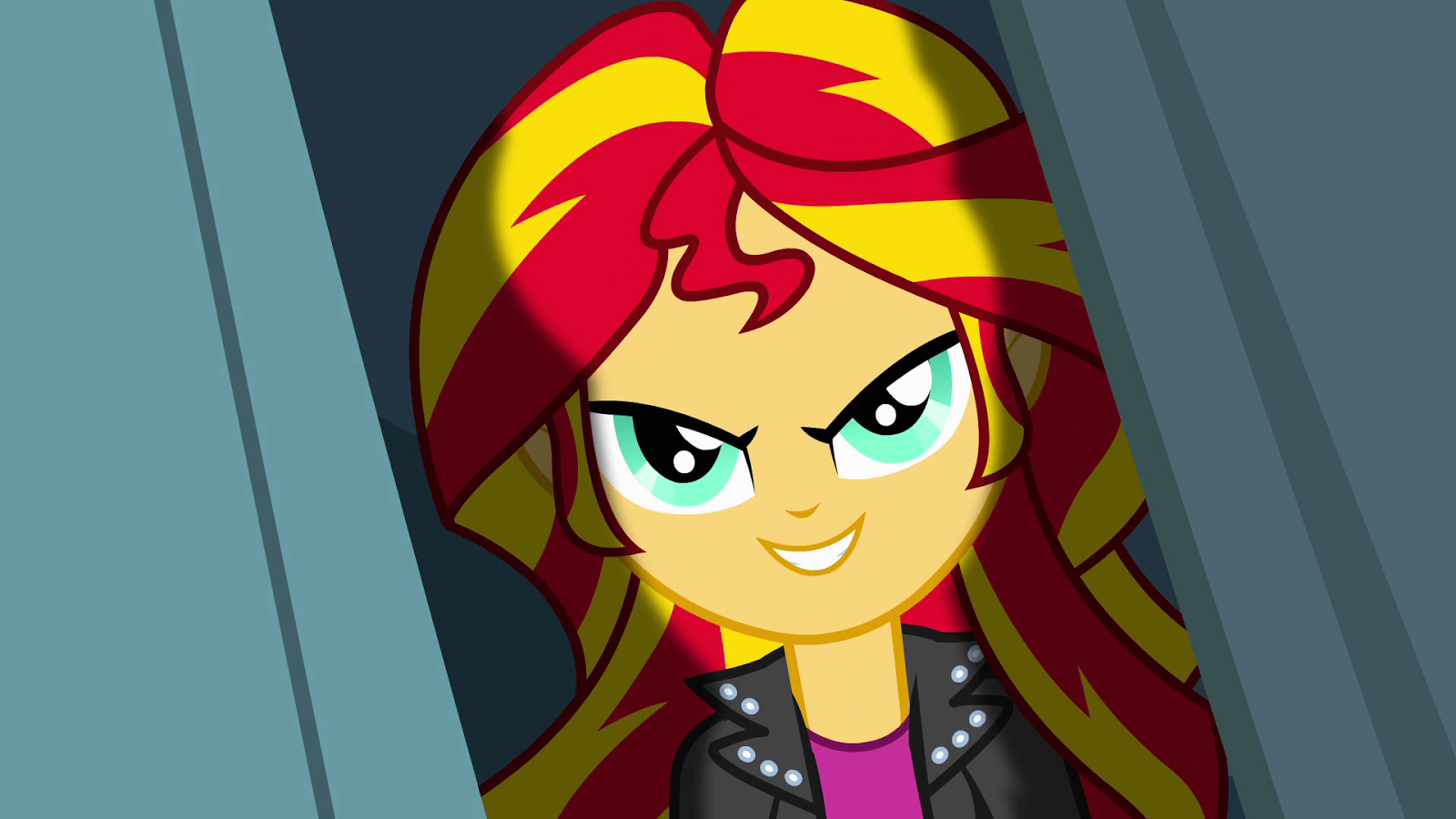 Spoiler alert: I was bluffing when I said I was going to destroy the portal. I don’t want to rule this pathetic little high school; I want Equestria! And with my own little teenage army behind me, I am going to get it!”

Hello & welcome to another Trotting Towards Nightmare Night article. Over on A Look at Disney, we’ve been taking a look at the 4 newest Disney villains with Villains Profile. I had considered expanding that to include MLP villains next year but as I was working on my Rainbow Rocks review (I don’t like it as much as the first movie), I was reminded how much I liked Sunset Shimmer. The main antagonist of the first movie. I’d go ahead and say that she’s one of my favorite villains. Now, for those of you that have read Villains Profile, this will include Voice Actress, Entrance, Personality, Lackeys, Grand Desire, Most Evil Deed, Demise, & Is Sunset Shimmer A Good Villain? But there’ll be one extra category for this series, Current State. I use this moment for MLP as they do not get rid of all their villains and some come around and we will explore that with Sunset Shimmer. For those wondering why I’m starting with her and not say Nightmare Moon, well it’s because I don’t feel like Sunset Shimmer gets that much respect in the fan community. 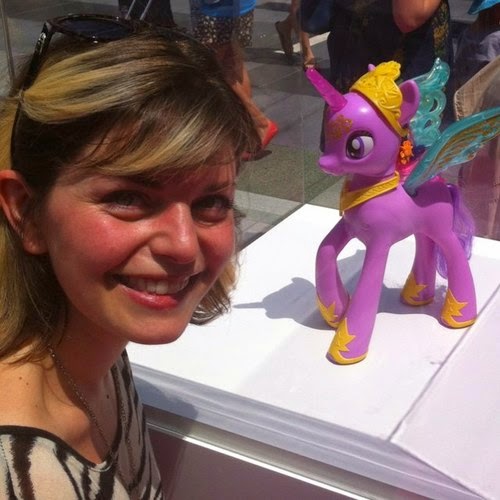 Rebecca Shoichet is no stranger to MLP as she is Twilight Sparkle’s singing voice. Which begs the question, why didn’t Sunset Shimmer have a villain song? But Sunset Shimmer was her first major role for MLP and in the first EQG film, she really sold Sunset Shimmer as this cruel and vindictive bully that ruled Canterlot High with an iron fist.

We first see Sunset Shimmer as a unicorn in Equestira (The Crystal Empire) to be exact. Attempting to steal Twilight’s Element of Magic. 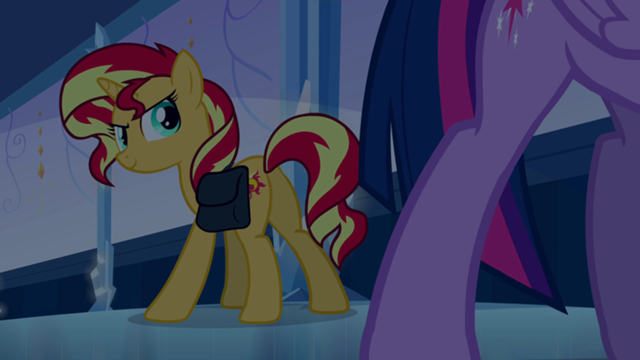 We learn from Celestia that Sunset Shimmer was once her student not long before Twilight Sparkle but when she didn’t get what she wanted. She turned cruel and dishonest. Now, this is an issue I have with the movie, they don’t actually explore Sunset Shimmer’s past and instead leave that to IDW to explore in the comics with the fall of Sunset Shimmer. Which is one of the most tragic My Little Pony stories ever. Celestia in that story shows Sunset Shimmer the Crystal Mirror and asks her what she sees (Anybody else getting Harry Potter vibes). She sees herself as a powerful Alicorn that could rule all of Equestira but she also sees something else and gets obsessed with it. 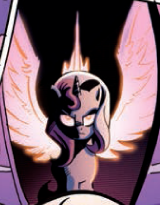 Her obsession is what led her to come to the human world. Okay yeah, look I understand that Celestia thought that Sunset Shimmer wasn’t quite ready but this could’ve been avoided if she had shared this information with Sunset Shimmer. Jeeze, Tia your past is as messed up as Peter Parker’s life. 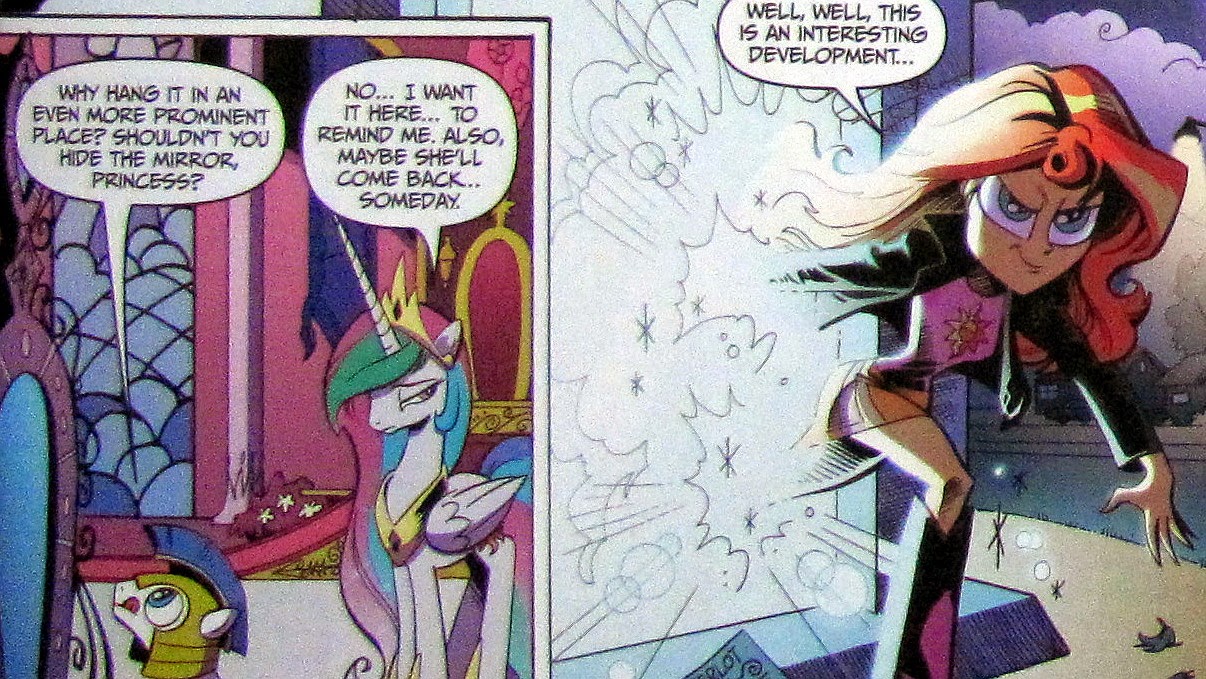 Now, after Twilight Sparkle goes to the human world and enters Canterlot High to retrieve the Element of Magic, we see Sunset Shimmer in the school bullying Fluttershy. (I’m okay, I’m okay. How dare she? I’m okay!)

I actually like this scene as it is real and just shows how much control Sunset Shimmer has over the school and just how far, she’s willing to go. You even get that sense with her first interaction with Twilight Sparkle. She is a bully through and through as we learn from the Humane Five, she is the one that drove a wedge between them and we even see how this is accomplished in the My Little Pony 2013 Annual comic, which was a prequel story to the first movie with the Humane Five being interviewed by a mysterious source, who on the last page is revealed to be Sunset Shimmer. 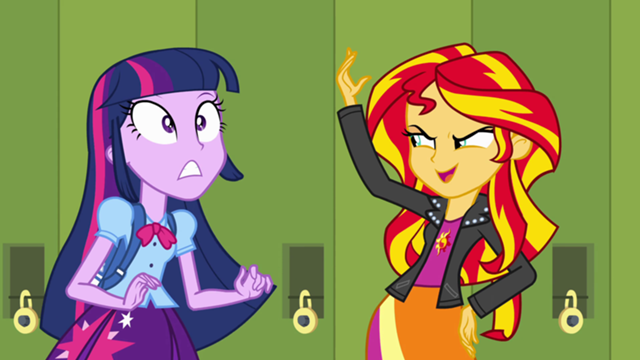 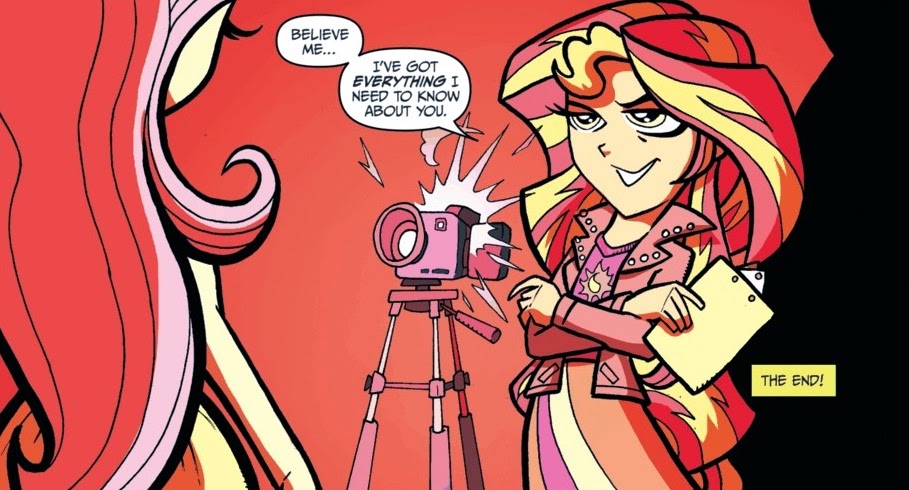 Now as I’ve said before, supplementary material such as comic books do not make up for the misgivings of movies but both The Fall of Sunset Shimmer and the Equestira Girls prequel help to develop her as a better character. And this is coming from someone that likes Sunset Shimmer.

Sunset Shimmer starts out as a bully. She is cruel and vindictive and rules Canterlot High with an iron fist. Everyone at the school is afraid of her. You get the sense that when she walked down the halls, even after students had come together, it doesn’t matter as she carries herself in high regard. 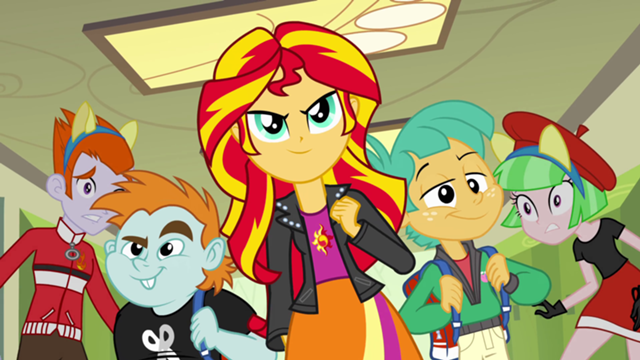 Just the way, she carries herself exudes arrogance and confidence. And that she has a bit of an ego. This is also explored in The Fall of Sunset Shimmer as you see there, that she could’ve been a good student but her obsession led to turn evil. 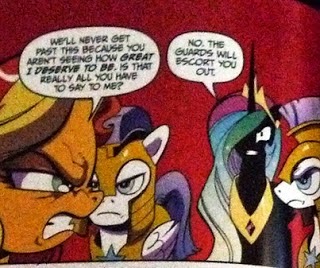 In many respects, Sunset is like Twilight Sparkle from the pilot episode, if Twilight had never friends with the girls in Ponyville. She thought nothing of needing friends as she turned her head at going to an event that she was invited to by Lyra. But even then in the movie, you see how truly cruel, she has become. Heck, you can see that just in the pictures of her winning the Fall Formal. There’s a slow progression going on in those pictures that we see in Principal Celestia’s office, when Twilight signs up for The Fall Formal.

Year One = She looks like a very sweet girl

Year Two = There is a slow progression into who she is in the movie. She just appears to be nothing more than a brat. Like one of those girls that you’d see on “My Super Sweet 16” 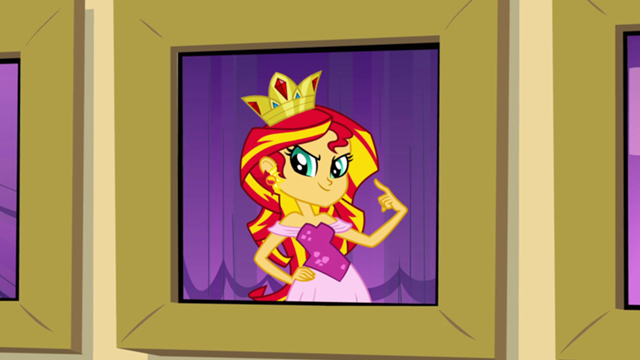 Year Three = There is a full glimpse of the monster that she is about to become. 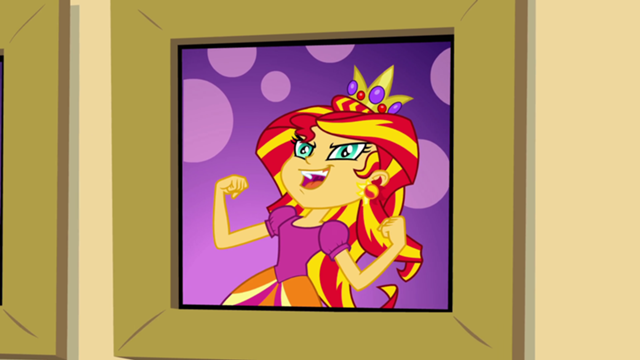 Now, some EQG detractors say that Sunset’s motives aren’t very clear in the movie. And well, they aren’t really right. As Sunset straight up admits what she wants to do with the Element of Magic after she puts it on.

Spoiler alert: I was bluffing when I said I was going to destroy the portal. I don’t want to rule this pathetic little high school; I want Equestria! And with my own little teenage army behind me, I am going to get it!”

She wants to take over Equestira, which boils down to taking over a world.

Now, her way of going about it, could’ve been handled better. Turning herself into a raging she demon ( her words, not mine) and Snips and Snails was a good move. 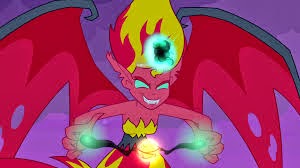 And I do imagine that they could put up a valiant fight against the three Alicorn princesses but let’s keep in mind that they could’ve called upon Discord for help as well. There is an area, where the plan falls apart.

And with my own little teenage army behind me, I am going to get it!

I love Sunset Shimmer but I really gotta know, what she thought a student body of teenage zombies would be able to do against Equestira. 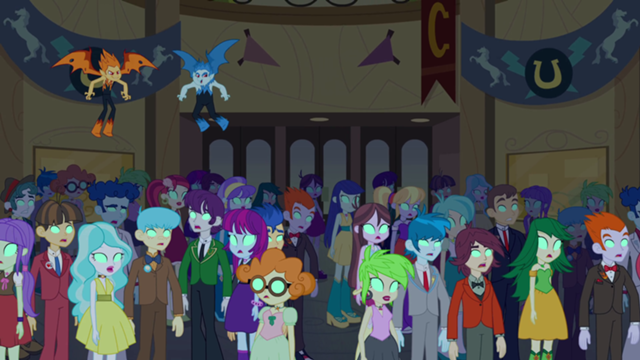 I really do wish that the film would’ve explored what this battle would’ve been like. As I think it would’ve been interesting to see what it would entail.

I’ll admit that the first time that I saw Equestira Girls, I was a little annoyed with Snips & Snails being Sunset Shimmer’s lackeys but the more I think about it, I’m okay with it for two reasons as these two have been proven to follow anyone. (See Trixie in Boast Busters and Magic Duel). 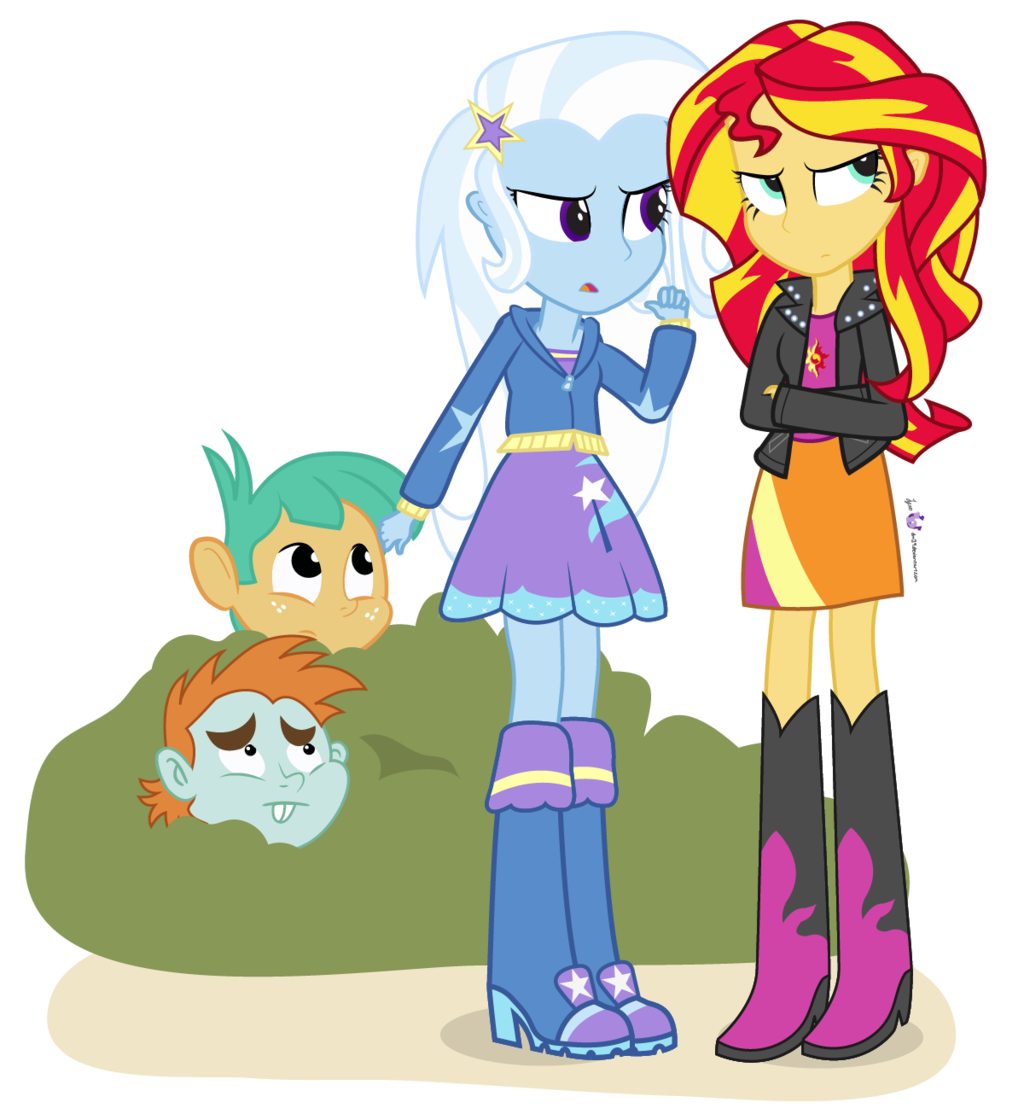 And secondly, these aren’t the same Snips & Snails that we follow in the show. So, I’m willing to let them being evil slide on that.

Now, this was a toss up between the zombie brainwashing and what I went with.

Driving A Wedge Between The Humane Five 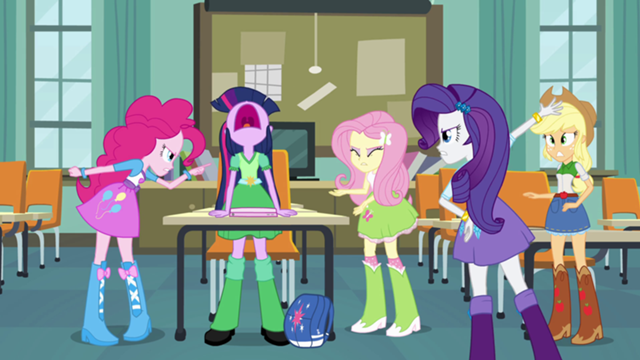 Sure in the grand scheme of things, this may not seem that big but lest we forget that the subtitle of G4 is “Friendship Is Magic” and with both the annual and the fighting of the Humane Five in Equestira Girls, we learn how Sunset Shimmer was able to use that against them. So, I honestly think that this is the most evil thing that Sunset Shimmer could do. She drove these girls that were once friends to hate each other. 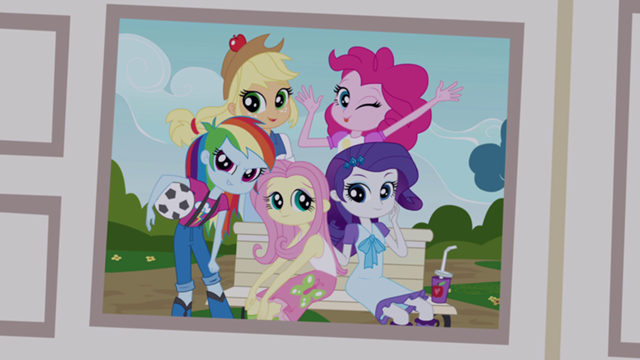 After turning into a raging demon, she is defeated with the power of friendship that comes from Twilight Sparkle, Rarity, Fluttershy, Rainbow Dash, & Applejack. (I couldn’t go this whole article without mentioning them by name). And we see her in a giant hole realizing the error of her ways and feeling sorrowful for what she put the school through ad admitting that she doesn’t know a thing about the power of friendship. Her punishment is to fix the wall that she broke. Fair enough. 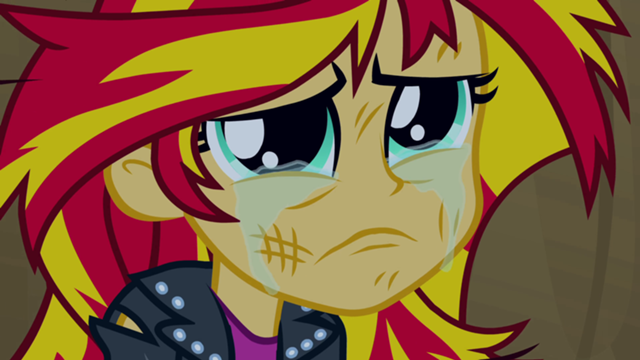 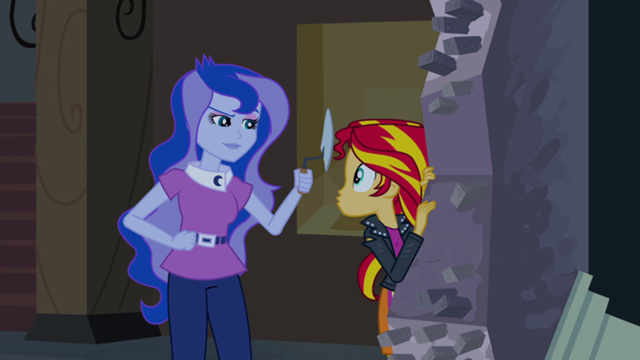 If you have not yet seen Rainbow Rocks, you may want to scroll down past this part as there will be spoilers for the recently released sequel. The sequel to Equestira Girls is Sunset Shimmer’s redemption story. You get the sense that is truly hurt by who she was in the first film and is sincerely trying to change her ways but she has an uphill battle as the school save for the Humane Five haven’t exactly forgiven her. And well, you can’t blame them. We see that she is truly friends with the girls as she is seen constantly hanging out with them. 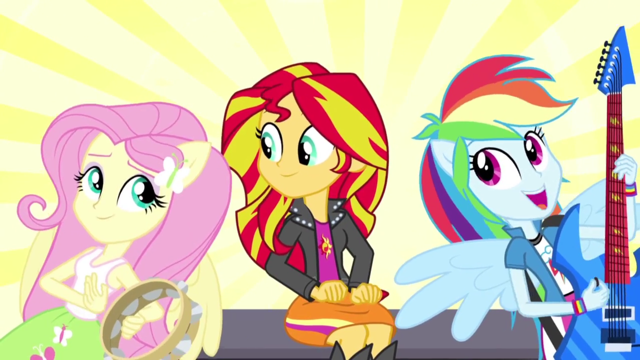 The best part about Sunset’s arc is that she does get her moment of redemption as she helps save the day in the sequel. You see the Rainbooms (The Humane Six) are going up against The Dazzlings (the villains of the sequel) in a Battle of The Bands but they are overpowered and Twilight Sparkle reaches out and says that they need Sunset’s help. She gets to step in and finally sing and has one of the most powerful verses from MLP.

And the true moment where you know Sunset Shimmer has come full circle and is not the same girl, she was in the first movie is that as she’s playing she transforms and grows a ponytail and pony ears. Symbolizing that she is now one of the heroes. 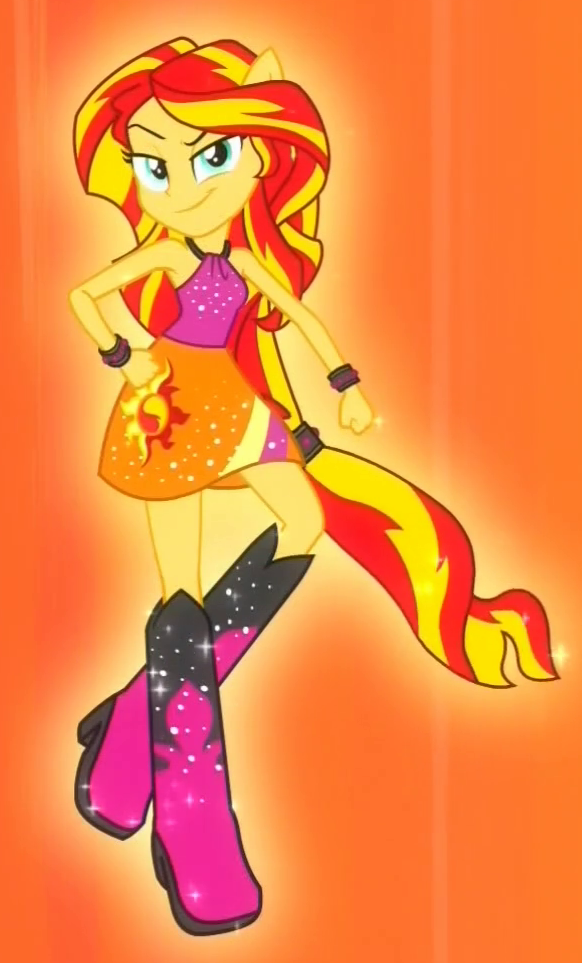 Now for all of the complaints that I have with Rainbow Rocks, this was one of my favorite moments. Because it brought Sunset Shimmer full circle. This was easily my favorite moment of the sequel as it did a great job of exploring her character. And it appears that we aren’t done exploring Sunset as there is a holiday special coming out from IDW set in the Equestira Girls universe that apparently will look at her character some more. As apparently there are rumors spreading around Canterlot High and people think it’s Sunset Shimmer that started the rumors. I know what I’m reading for Hearths Warming Eve (No really,Â  IDW is waiting until December 24th to release this comic,Â Â  Urgh.), this year. 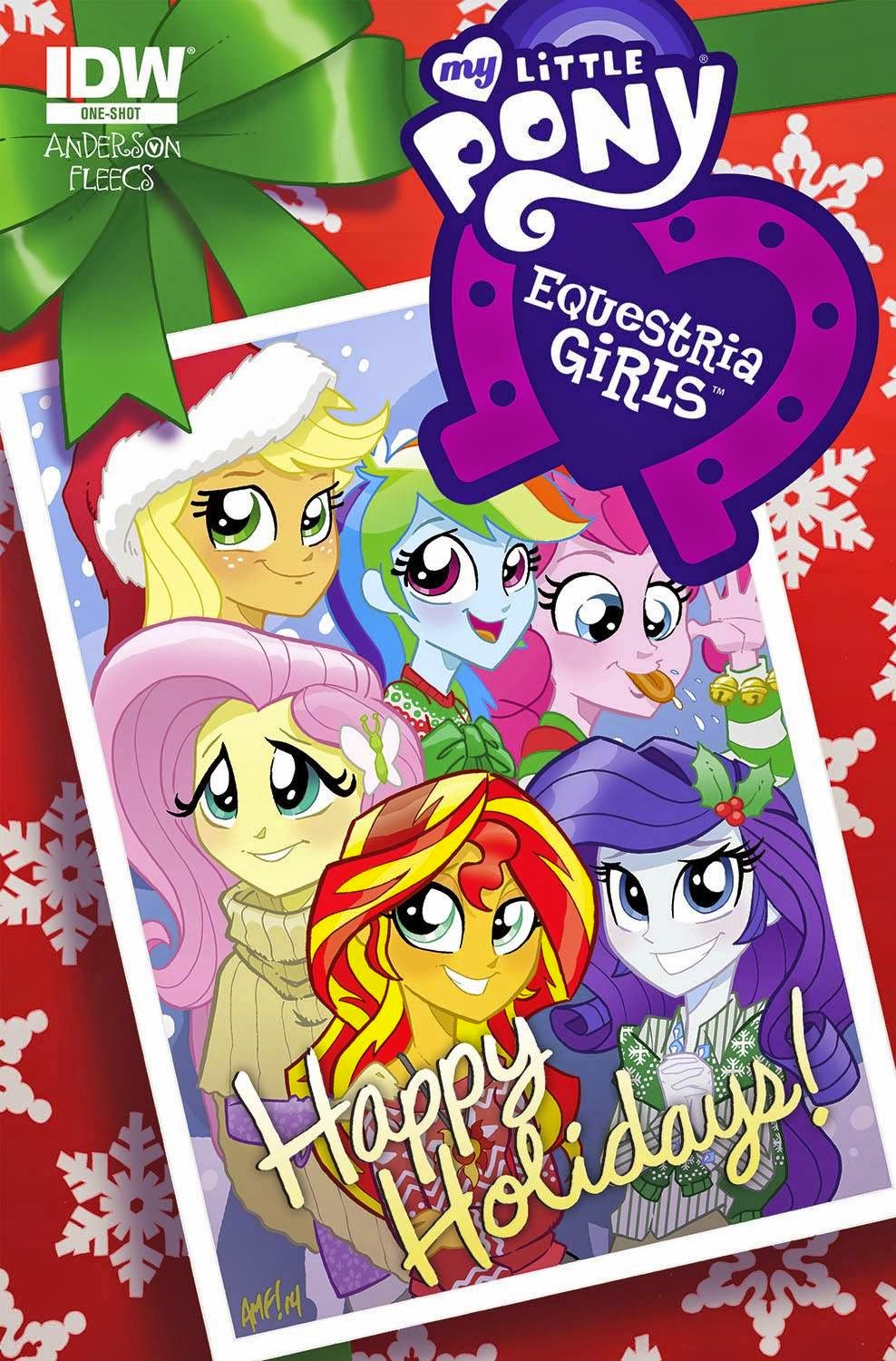 I’ll freely admit that Sunset Shimmer had some serious flaws in the movie but those don’t keep me back from enjoying her as a pretty decent villain but I actually enjoy her story of redemption in Rainbow Rocks more as you see that she is genuinely trying to change but she has an uphill battle against her. But you do get the sense that she does want to better herself. And I have to say that I think that this is the best and most sincere redemption arc that MLP has done. And I’m looking forward to her character being explored more in the Holiday comic. And If I’m to be honest, Sunset Shimmer has gone on to become one of my favorite characters from this franchise. What are your thoughts on Sunset Shimmer? Let me know in the comments, peace.