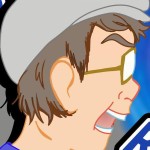 So what is Rowdy’s take on the newest TMNT series?
Note: Since I originally made this review, I have come to believe that I might have been excessively harsh on the Nick series, especially given what I have been told about the second season. Please note that so far I have yet to watch that season, and there are still some things about this series that are not to my taste, but I would definitely rank it as better than certain other incarnations of the Turtles as well as some of the other stuff Nickelodeon is putting out right now.