Hello & welcome back to A Look at Disney. Recess, that was one of the greatest shows that was a part of Disney’s One Saturday Morning. In 2003, Disney released a DVD set of shorts titled Recess: Taking The Fifth Grade that served as the series finale to the beloved show. The DVD contained three shorts that were interconnected such as No More School, where T.J. quits school because of new policies put in by the school board, Fifth and Sixth Graders Club, which is perhaps the weakest of the three shorts and the subject of today’s review, A Recess Halloween. Now, this is technically the second Halloween special that Recess has done because in season 6, the showed aired The Terrifying Tales of Recess, an anthology episode of three horror-comedy shorts.And while that episode is good and a lot of fun for Halloween, I found this one to be more poignant as it took me back to that awkward time in my life, where I thought I was getting too old for Halloween. That is the central theme for this DVD, growing up.

The main focus of this segment is on Spinelli. The segment starts out with Spinelli and her parents going to a pumpkin patch for Spinelli to pick out a pumpkin and gets the strangest and ugliest pumpkin that she can find. And then who should show up but the bully of Third Street, Lawson starts picking on Spinelli and saying carving Jack-O’-Lanterns and going trick or treating is for babies. And Spinelli lets this get in her head. And the next day at school, we see that Lawson’s comments are still affecting Spinielli. So much so, that she doesn’t have the spirit for a Halloween party being thrown by Miss Finster. Granted, she brought cupcakes with prune icing. But we see that even lunch, that Spinielli is down in the dumps and has given up on Halloween. Even, when the rest of the gang try to cheer her up with the memories of Halloween’s past such as a nice lady, just being cheerful when giving them candy, walking an old abandoned prison and a haunted house. All of these will come into play later on Halloween night. Later, that night at Spinelli’s house, we see that her parents are going out to a party and the gang comes by and still can’t convince Spinielli to come trick or treating. So, the gang goes out by themselves and soon learn that everything that they loved about Halloween wasn’t. Such as the nice old lady that always been giving them bags full of candy was a dentist giving them sugarless candy or that the old abandoned prison is actually a DMV. Their Halloween with these revelations and many others seem to be putting their Halloween in the dumps. Spinielli is slowly remembering how the good times, she had Halloween, when trick-or-treaters show up and there is a cute moment, where there are two little kids show up dressed as dinosaurs and Spinielli gives them advice on to roar from the stomach and covers them in ketchup to use as fake blood, so that people know that they are carnivores.

Later, Miss Finster dressed as werewolf shows up and Spinielli talks to her about how she feels too old for Halloween but Miss Finster says that some people never get too old for the holiday. She was looking for Spinelli’s parents for a party but they weren’t home but instead, Miss Finster gave her this advice. I liked the scenes between Miss Finster and Spinelli as I got the impression that there was still a relationship there from the episode, Weekend at Muriel’s from season two of the show. It’s a small moment that you get the impression that these two still have a relationship outside of Third Street. After talking with Miss Finster, Spinelli decides to go out trick or treating and has to catch up with her friends. Who had gone home. She calls them to go to an old house that is rumored to be haunted and this is is the first year that no one is living in the house, so Spinelli dares them to go into the house and they can get a scare as Spinelli had called Miss Finster, who had gotten the other school faculty there to turn the house into a haunted house and Spinelli tells them, they can still enjoy Halloween as they aren’t too old for it.

Seeing as this was to serve as the finale in the Recess franchise, I’m okay with that as it serves as a good sending off point for these characters. 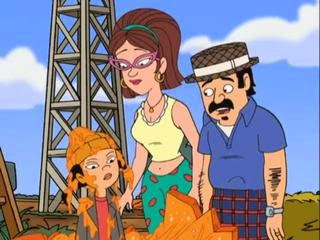 This was Spinelli’s story through and through and you could see how much Lawson’s comment effected her and she let get inside her head. It was entertaining to see her come to terms with the fact that you are only too old for things such as Halloween, only to come the realization that you are only too old for something, if you decide that you are. And as someone that still dresses up for Halloween and loves seeing the various costumes, I love this message. Again, the central theme of this segment was coming to terms with thing aren’t what you believe they are and it deals mostly with growing up and while you may get older, you can’t still enjoy things that you’ve always liked such as Halloween and while there may come a time, when you have to put up the buckets, you can still the window of time, that you have to be a kid.

This was a great Halloween special and perhaps my favorite segment from Recess: Taking The Fifth Grade. If you are a fan of Recess and have not see, Taking The Fifth Grade, I’d say track it down as it is a very good send-off to these characters and with this being the final short featuring the Recess gang, I say that they went out on a good note. Join me tomorrow as we head to the House of Mouse to celebrate… 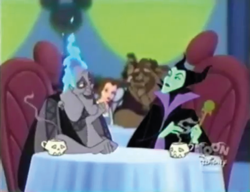