(I decided to upload two reviews in one blog since one of them is incredibly short and I wouldn’t like it being uploaded by itself due to its length.)

A while ago, I looked at the MLP Fan game Banned from Equestria (Daily). 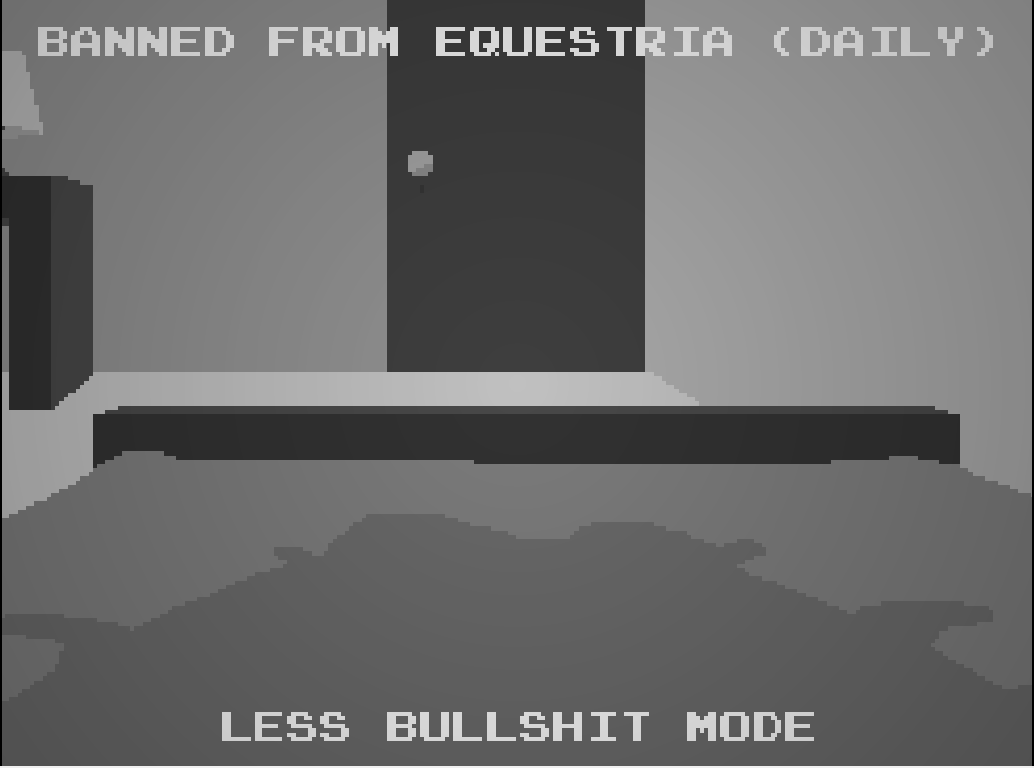 I try not to revisit it so I’ll only say one thing for those who haven’t seen the review: I think it’s gross and I don’t want to see it every again. Unfortunately, I did find out that a Halloween update exists for it and I decided to look at it. The game has become incredibly shorter with very few options to choose. The only thing you can actually do is go to Sugarcube Corner to visit Pinkamina and when you do she f**ks you and then kills you due to blood loss. (Mostly because of the line from the .MOV series “My daddy put glass in my V****a.”)

It filled with Creepypasta homages and elements such as having a ponified version of the Zelda Creepypasta Ben and having Mrs. Cake being Zolgafied. Plus, Ponyville looks alot like Silent Hill.

Aside from these differences, it is essentially the same game.

Overall, I still don’t like it. I don’t like the original game and I don’t want to play or see it ever again.

Sometimes, we all get distracted by Work. It can be nice having a job and a steady source of income, but it can occasionally cause heavy amounts of stress whether it be from co-workers, deadlines, etc. Unfortunately, some people get a bit too fustrated at their work which often leads to them being a bit on the crazy side with some very negative results following with it.
With that being said, I found a fanfic a while ago telling of such a situation dealing with Ponyville’s Main Fashionista entitled Rarity’s New Dress.

One day in Ponyville, Fluttershy decides to go check up on Rarity due to a recent lack of appearances. When she arrives, Rarity then asks for Fluttershy’s help finding someone to model for one of her dresses. She then gets Applejack for it and Rarity then takes her down to her Basement.

Hours pass, Rarity comes out asking for another model. Fluttershy then brings the rest of the girls to Carousel Boutique and they all go into the basement, except for Fluttershy. Hours later, Rarity then asks for Fluttershy to come down and Critique her work for her. When she enters the basement, she then tries on the dress Rarity has made. The results are very…different from what she expected… (There weren’t any images for the story online so I drew it based on the description.)

Rarity then realizes the dress is missing one important piece… So she decides to use Fluttershy’s skin to finish the Dress, as well as take a few other parts off her as well. Rarity wants to have the rest of her skin for other projects, but before she could Spike shows up. When Spike enters the basement, Rarity then proceeds to have sex with him…atop Fluttershy. They then proceed to go upstairs to do it again and Fluttershy then dies.

…So, where should I begin with this?

I’ll Probably start with one of the bigger issues I have with it: Rarity’s portrayal.

Since Rarity is one of my favorites ponies from the show, it’s pretty obvious I wasn’t thinking very highly of the idea of Rarity being the pony equivalent of Buffalo Bill from The Silence of the Lambs. Her personality sometimes would fit her being a villain well, but I don’t think her being a murderous psycho would really fit.
(I find this to be a bit odd considering I kind of liked Little Miss Rarity.)
The other reason I didn’t really like her portrayal is because she had no real motive behind her actions. In Cupcakes, they had Pinkie kill Rainbow mainly for Business reasons, in this it was just crazy because…reasons…I have no idea why and it really makes the character’s personality dull. (At least with Pinkie it can make sense.) Plus the whole Psychotic Killer idea is my least favorite Creepypasta concept.

Oddly, the story went by rather quickly in my opinion. It only consisted of Rarity and Fluttershy sharing a small amount of dialogue following by a small amount of “horror” at the end of it. It really felt empty to me. I wish it added in something like the girls trying to put up a fight against being used to make clothing, especially since one of them knows a great deal of Magic, another being a Strong Earth Pony, and one of them can Fly to avoid her.

The whole idea of the story wasn’t very original. Like I mentioned with Rarity’s Portrayal, it was basically the whole set up of Buffalo Bill from The Silence of the Lambs, plus Pinkie did the same thing in Cupcakes. Come to think of it, this whole Creepypasta reminded me of Cupcakes too much.

The one thing I never expected to end up in this was the ending. It came completely out of nowhere and it didn’t add anything to the story except for maybe some shock value to it. I don’t really care for the Spike x Rarity ship, but even if I did I would not enjoy having it in the story at all.

Overall, I didn’t like it. It seemed to me almost like a copycat of Cupcakes, which I didn’t like anyway, so it ended up being rather lackluster. I definitely can’t recommend it to anyone, especially fans of Fluttershy & Rarity, but if you want to read it, I won’t stop you.