Back in 1985, Tom Holland released the Horror Film Fright Night which told a simple story of a boy who soon realizes his new neighbor is a vampire. The film was met with major success both commercially and critically which ended up eventually becoming to be considered as a cult classic.26 years later, a remake of the film was madeâ€¦and it was in 3D for some reason (as well as oddly being released by Walt Disney Studios via Touchstone.) The Remake was met with Success critically and commercially as well.

So with the success of both films, one does obviously wonder which the more superior film out of the two is.

So, The Man with No Chin and I have decided to find out which version of the film is the better one. Creature: I’m glad you could do this with me. We’ll start this off by looking at our Hero of the films, Charlie Brewster played by William Ragsdale in 1985 and Anton Yelchin in 2011. In the original, Charlie Brewster is your typical Teenager who hangs out with his friends and loves old Horror Movies, but gets suspicious of his new neighbor when he moves in next door and eventually starts investigating further while staying away from him.

In the remake, he’s protrayed mostly like a regular 2010’s teenager who use to be a nerd and isn’t much of a Horror Movie Fan. Instead of finding out about Jerry at first, his friend Ed believes that he’s a vampire and Charley later learns when investigating. He’s a bit more serious about the situation when learning the knowledge of his neighbor’s true nature and gets very protective while trying to keep Jerry away from his mother.

Man With No Chin: The big difference I think between both versions of the character is that Charlie in the original is much more prone to letting his imagination get the better of him and making rash decisions, while Charlie in the remake seems to have his feet planted more firmly in the ground. Unlike in the original, Charlie in the remake doesn’t immediately come to the conclusion that his neighbor is a blood sucking monster but when he does finally realize that Jerry is in fact a vampire, he handles it considerably better than the old Charlie who comes off more as some kid who’s been watching way too many horror movies and who no reasonable person could ever take seriously. So with that said, I’ve gotta give points to Charlie in 2011 version. It’s not that Charlie in the original is an unlikable character, but I think throughout the course of the movie his actions tend to do more harm than good. Charlie in the remake seems to be the much more saner of the two versions and handles the whole â€œmy neighbor is bloodsucking, murderous demonâ€ situation with a much cooler head, and by the end of the movie he even takes some control and becomes quite the badass. He’s the guy you’d want by your side when dealing with some blood suckers.

Creature: I think that both versions are likeable in their own way, but Anton’s performance is the more level-headed and isn’t as rash as Charlie from the ’85 film. He’s clearly the wiser choice out of the two.

Man with No Chin: So let’s move onto our vampire and villain of the two movies, Jerry Dandridge, played by Chris Sarandon in the 1985 film and Colin Farrell in the 2011 remake.

The 1985 Jerry could be considered more your classic vampire in that he’s gentlemanly but still menacing, slightly brooding, and even has a former lover that he outlived and still pines for. The events of the film are set off when he and his ghoul Billy move next door to Charlie and his mother where he then proceeds to feed off local prostitutes.

2011 Jerry is much closer to modern portrayals of vampires, being a sadistic, ravenous monster who takes great glee in killing his victims in the worst way possible and unlike the 1985 Jerry, he’s all too happy when Charlie discovers he’s a vampire and takes great pleasure in fucking with him at every turn. Like the ’85 film, it’s the same set up with a few changes here and there. Jerry moves next door to Charlie and his mother and begins feeding off the locals, and it’s not just limited to prostitutes in this one. He also kills a former friend of Charlie in the first few minutes of the movie which establishes what a monster he truly is.

So Creature, any thoughts on who’s your favorite version of the character?

Creature: While both actors give good performances as the Vampire Next Door, I’d have to go with Chris Sarandon as the better of the two. I do admire the fact that Colin’s Jerry likes to mess with Charlie and , but I think Sarandon’s performance, much like the vampires of old, was very subtle about his true nature and…

*looks at Kyle trying to bite my arm*

Kyle, what are you doing?

Man with No Chin: What!? Nothing! I was doing nothing! What a silly thing to ask. Say, how about stop with the stupid questioning and move on to the next character, Peter Vincent the great vampire killer, played by Roddy McDowall in the 1985 original and David Tennant in the remake. 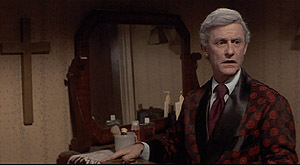 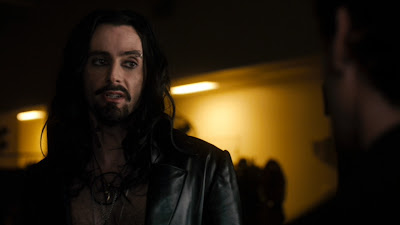 In the Original, Peter Vincent is a washed up actor with an onscreen role clearly based off Peter Cushingâ€™s Van Helsing in the old Hammer Horror Dracula films. When Charlieâ€™s first attempt at stopping Jerry fails, he goes to Peter asking for help and he of course thinks Charlie is nuts and refuses to help him but he does agree to help Amy and Evil Ed in trying to convince Charlie that there are no vampires when they bribe him. With Jerriâ€™s â€œparticipationâ€, a secret test is administered to prove heâ€™s not one of the undead and everything seems to check out until Peter catches a glimpse of Jerriâ€™s reflection, or lack there of of one which terrifies him. Eventually he has to overcome his fear and become the real Peter Vincent in order to help Charlie.

In the remake, Vincentâ€™s a Las Vegas showman/stage magician in the vain of Chris Angel who acts more like a drunken, burned out rockstar. Like the original film, he at first refuses to help Charlie with his vampire problem but unlike the original, itâ€™s not because he doesnâ€™t believe in vampires. He does in fact does believe in them and for a very good reason which I wonâ€™t spoil here.

Creature: This was actually a bit of a hard choice for me. I like Roddy McDowall’s performance as a washed up actor who rises to the challenge at the end, but I also enjoyed David Tennant’s performance which was a mixture of him playing the Doctor with an ’80s rockstar. So, I’d have to with a Tie for this one.

So let’s talk about both of their Special Effects.

Man with No Chin: You know, Iâ€™m someone who loves practical effects and I make no exception with ones used in the 1985 Fright Night. The makeup used to show the vampireâ€™s true forms are fantastic and pretty scary if you ask me. So yeah, not much to say on this subject. Just props to whoever did the makeup and effects.

Creature: For the Remake, they decide to go with the use of CGI in it. In this itâ€™s used for Vampires exploding in sunlight and is also used for blood. Honestly, I think itâ€™s really stupid that they waste their time doing especially when blood is one of the easiest things to do in a horror film.

So itâ€™s obvious Iâ€™d go with the original film with the superior effects.

Man with No Chin: Glad weâ€™re in agreement about the effects, and further moreâ€¦ HOLY SHIT, YOU HAVE A PAPER CUT ON YOUR FINGER! Quick let me lick itâ€¦I, uh, I mean Creature, you have a paper cut. We better get that cleaned up right away.

The Creature: It doesn’t look that bad. Anyway, How about we get to the final topic so we could wrap this up.

With both films being about Vampires, I think we should see how they hold up against other Vampire films.

Man with No Chin: When comparing the films to other vampire movies, I always look at Fright Night 1985 as the more classically inclined vampire story even though it was considered to be a more modern take at the time and has a lot in common with Dracula, especially the old Hammer horror Dracula films. Fright Night 2011 is the more contemporary of the two and takes after more recent Vampire media like Buffy and 30 days of night. Overall Iâ€™d say they both do a good job when it comes to paying homage the Vampire films of old and new.

Creature: I agree, both films do great job of paying homage to the Older and Newer generations of vampires and they really did give me joy in knowing the Vampires in the remake going back to their roots, especially with a certain book/film series ruining them for me…

So, with all of that being said, it’s time to decide which film is superior.

Man with No Chin: You know upon first viewing of it, I actually disliked the 2011 Fright Night. I though it was bland and nothing special, but upon a second viewing I enjoyed it a lot more and I can say itâ€™s actually a solid remake and a pretty good film on its own, but if I really had to choose between it and the 1985 film then Iâ€™d go with 85. Thereâ€™s just a certain spirit and cheestastic fun it has that can only be found in an 80s movie and thatâ€™s why I and a lot of other people love it. Itâ€™s a true cult classic.

The Creature: I’d have to go with the Original as well. While the remake did suprise me with how it was treated and although I did get enjoyment from it, I always have fond memories of the original Fright Night with the cheesiness of it that it has and it will alway be a personal favorite of mine.

Man with No Chin: Well Creature, I had a fun time doing this Old vs New with you and now that itâ€™s over, Iâ€™m gonna eat you.

Creature: Yeah, it was fun toâ€¦youâ€™re going to do what!?!

Man with No Chin: Yeah, Iâ€™m a vampire and you invited me into your home and now Iâ€™m going to kill you and drain you of your vital fluids. To be honest, I have no idea how you didnâ€™t see any of this coming, I mean I made it super obvious.

Well, I have been known to overlook certain things at timesâ€¦

*Quickly pulls out a Cross & points it at Kyle*

Get away from Me, Demon!

Man with No Chin: Yeah, thatâ€™s a neat trick with the cross and all. Too bad you have to have faith in order for it to work, you godless heathen.

Creature: â€¦Sh*t. I really thought that would work.

Man with No Chin: Understandable mistake. *Pounces on Creature and knocks him to the ground as camera pans to window which is then splattered with blood*