Smartphones and tablets have proven themselves as beneficial media forÂ the mobile gaming market.Â Not only have they given smaller developers a chance to reach a wide audience with their products, they’ve firmly established touch screen technology as a viable mechanic in game design for almost any genre. The potential for innovation is incredible, yet the mobile marketÂ suffers from one of the great failings that plagues other digital distribution sources – oversaturation. The iOS and Android app stores are becoming glutted with shovelware, knockoffs, watered-down ports and outright broken games from cynical studios looking to make easy money. It’s becoming difficult to find the true gems buried under the trash heap ofÂ dress-up games and Flappy Bird clones.Â Hopefully more stringent quality control and better search engines will be implemented in the future, but until then the best way to ensure that you’ll find quality titles is to do the research. See what games people are talking about, look them up to find out if they suit your tastes, give them a shot and, if you like them, spread the word. It’s the best way to introduce others to impressive games they may be missing out on. Here are two mobile games I recently completed after learning about them from online review sites. Let’s see if they’re hidden delights or more fat that the app store needs to trim. 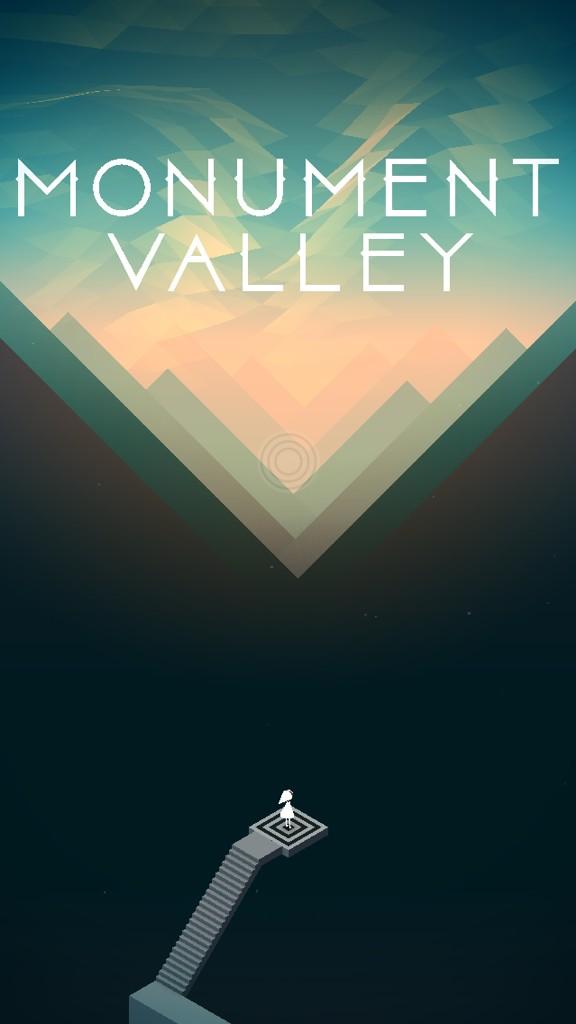 Monument ValleyÂ (developed and published by ustwo Studio): In a daleÂ cut off from the rest of the world, the silent princess Ida wanders about mysterious ruins in search of forgiveness. All she carries with her are mysterious geometric constructs which have some connection to the monuments. What is their significance, what is Idaâ€™s crime, and who will absolve her in this lifeless realm?

Monument Valley is very reminiscent of Journey. Itâ€™s set in a fantastic world shrouded in mystery, focused on one individual embarking on an important quest, and thereâ€™s hardly any dialogue with the exception of chapter titles and a few lines of conversation. Where Monument Valley differs is that it has a tangible plot, whereas Journeyâ€™s narrative was symbolic and open to interpretation. The brief descriptions at the start of each chapter reveal a small amount of information pertaining to Idaâ€™s quest. Periodically a spirit will address Ida, either to ask why she has returned after committing her crime or to lament on the downfall of her civilization through the loss of sacred geometry. It provides some insight into the history of the gameâ€™s world, but several questions are still unanswered by the end. Ida obviously stole the sacred geometry some time ago, but what was her motivation? How did these objects help the people of the valley advance as a culture, and were they entering a decline before Idaâ€™s theft? I didnâ€™t feel the finale was hurt by leaving them unresolved, though some more clarity would have made it stronger.

Like Echochrome and Fez, players progress through Monument Valley by solving spatial perspective puzzles in order to reach each levelâ€™s goal. Structural segments can be rotated, slid, or inverted to open new pathways. The isometric perspective allows this feature to be used for completing seemingly impossible feats such as shifting the planes on which Ida walks, closing a gap simply by switching the angle of view 90 degrees, and building bridges between areas at different heights. The touchscreen controls are incredibly responsive; there were barely any instances where the game failed to register a swipe or movement.

In Chapter 5 a new type of obstacle is introduced â€“ crow people that wander back and forth along set routes, preventing Ida from moving forward. To bypass them, players will either need to create alternate routes or find a way to block them off. Chapter 6 features a totem that Ida can ride on or use to press switches, allowing for new types of puzzles, but the concept is only used in this one level and never after. The last three levels are by far the most impressive, presenting in order: a box that reveals a different area depending on which face is opened with actions in one segment affecting another, a submerged monument which must gradually be raised from the sea to access the tombs within, and a final challenge where players must navigate through four different impossible structures, each with its own type of perspective manipulation. The last chapter can be frustrating at times, but once youâ€™ve learned how the rules for the individual monuments work, it becomes easier to figure out what needs to be done to reach the end. Itâ€™s what a final stage should be, testing the player on how well theyâ€™ve mastered the skills accumulated throughout the game.

Another similarity between Monument Valley and Journey is its visual style, though far less detailed. Characters and environments are composed of simple polygonal shapes with vibrant color schemes. Despite a lack of dynamic lighting, subtle shading and muted hues create some perspective depth. Each monument has its own distinctive design, many with features inspired by the optical illusions of M.C. Escher: looping waterfalls, stairways that defy gravity, and overlapping structures which simultaneously do and donâ€™t share the same position in space, depending on the perspective. The soundtrack is composed of several pleasant new-age inspired pieces to compliment the mood of each chapter. By moving certain structures, the pitch and tone of the music can be altered slightly, adding the sensation that itâ€™s intertwined with the world and not simply background effects. Most of the ambient sound effects are handled well, though I found the shrill caws of the crow people to be incredibly annoying.

The only downside to Monument Valley is that it can be completed fairly quickly. It took me just about two hours to reach the end, and some players could probably finish in less time. At its current price of $4.00 it may appear to lack enough content to justify the cost, but the replay value more than makes up for its length. This is a game that gains appreciation with each successive playthrough, either to experience Idaâ€™s tale once again or to try and reach a new best time. And if one or two additional chapters had been included, they may have ended up as unnecessary padding. By keeping the design simple, tight, and engaging, ustwo succeeded in creating one of the most impressive puzzle games on the mobile market.

Do not compensate for a

Not a particularly memorableÂ haiku, I’ll admit, but it sums up the experience of playing Tengami better than any poetry in the game.

Tengami is a game without a plot. A young man sleeping under a cherry blossom tree awakens during winter to find that it is now barren except for one flower. He then sets off to retrieve the remaining blossoms and restore the tree to full bloom. Thatâ€™s the entire premise. This could have been a setting for an introspective journey with the player character contemplating how this mission relates to his life and his own personal struggles. Instead itâ€™s a succession of menial fetch quests. Even more disappointing, the developerâ€™s page for Tengami promotes it as â€œan atmospheric adventureâ€¦ full of wonder and mystery, set in Japan of ancient dark fairy tales.â€ None of that is seen in the final product. The environments are so generic they could represent any location, and the lack of character motivation or a reason why obtaining the blossoms is so important results in a dull, lifeless atmosphere. The ending is a complete letdown with no resolution or sense of achievement, just a trite musing on the cycle of death and rebirth.

Tengami plays like a point-and-click adventure. Players move by double tapping on the spot they want to move to, looking to reach a warp point that will take them to the next location. Occasionally there will be some obstacle to hinder them, such as collapsed stairs or a locked door. Puzzle solving shows a bit of creativity because of how it relates to the presentation. The game is set in a pop-up book, so certain parts of the environment can be altered by sliding your finger across the screen like pulling a tab. Quite a bit could be done with this mechanic, but the overall execution is fairly lazy. Most of the puzzles fall into one of three categories: flipping sections of the background to manipulate the layout of a level, rotating rings to make an image, and sliding combination locks, all of which are fairly easy to solve. There were a few interesting ideas like changing the seasons or manipulating the water level in a well, but they were overshadowed by the repetitive puzzles. Any real challenge arises when the touch screen wonâ€™t respond to movements, requiring multiple swipes to get a reaction. I ran into several instances where I had to swipe from the edge of the screen to move to the next area, like I was turning a page, only to have it fail to register or flip back to the previous scene after it had almost completely transitioned.

If there is one positive thing I can say about Tengami, itâ€™s that it looks beautiful. Every part of the world is designed to resemble a paper cutout, with each level having its own distinctive design and palette. When characters turn around or walk at an angle players can see that theyâ€™re two-dimensional, much like in the Paper Mario games. David Wiseâ€™s soundtrack makes great use of traditional Japanese string instruments like the koto and shamisen to create a soothing melody. Itâ€™s aesthetically pleasing, but not enough to salvage the rest of the game.

Tengami shows how indie games can fall into the same trap as triple-A titles when they put more emphasis on looking good than playing well. Itâ€™s doesnâ€™t provide any stimulation, has faulty touch screen feedback, and can be completed in about half an hour. Reading an actual pop-up book would provide more entertainment than playing this game.

Monument ValleyÂ is the clear winner here. Not only did it keep me engaged from start to finish, it’s one of the few mobile games I have that I’ve revisited to play again. If you’re looking for a strong title to add to your iPhone or iPad library, consider checking it out.