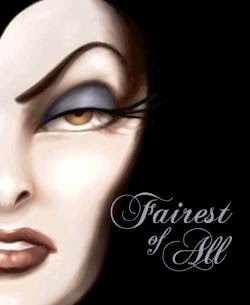 Momma, can I please have my heart back?

Hello & welcome back to A Look at Disney and today, we continue the Halloween celebration as we take a look at a book about Disney’s original villain. The Evil Queen. Today, we are taking a look at Fairest of All: A Tale of the Wicked Queen. For those expecting this book to be like Maleficent, you’d be half right. The Queen does start out as a kind and caring person but this book is about her descent into wickedness and becoming the Queen, we know in the movie. There be no redemption here. 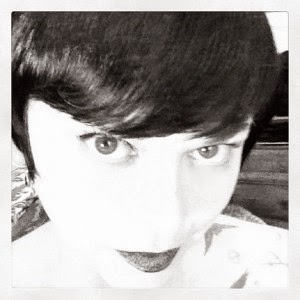 Serena Valentino got her start writing comic books and you can since from her biography on her website that she has a taste for the darker stuff as she has written about zombies and werewolfs. And she has just released her second book for Disney Press, The Beast Within: A Tale: A Tale of Beauty’s Prince. Though, I’m reluctant to read that one as I’ve heard mixed things about it and I have more of a connection to that film than Snow White and she is currently working on a novel for Disney Press focusing on Ursula.

The cover is just okay. There’s really nothing all that special to it. It’s let you know what you are in for though. Though I do like the touch of the back cover being the Hag. 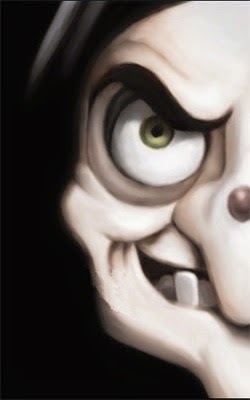 As I said up top, the main plot of the book is watching the Queen go into her descent of madness. The book opens on her wedding to Snow’s father and reflecting back on her life before marrying the King and that she did not have an easy life. Her father hated her, because her mother died while giving birth to the young girl that would become the Queen. Now, it takes a while before we get to the actual descent of madness because we spend the early chapters with them as a happy family. Though, things start to go awry, when she is given one of the wedding gifts. Being a mirror and it causes her a fright. Even more so, when we learn that the mirror is home to her father that is now her slave and this starts to scare her. This will play a part in her descent into becoming the Evil Queen. There are quite a few factors that play into this, one losing her beloved king and there are other factors. Her father hated her and always told her that she was ugly but now he is her slave and becomes her drug that feeds with the words that she always wanted to hear from her. The other big factor in turning the Queen into the villain, we know from the movie are the King’s three cousins, Lucinda, Ruby, and Martha that happen to be witches and are the ones that gave her the gift of the mirror and they were the ones that trapped him in the mirror. They meddle with the relationship and from the moment, they show up in the book, you get the sense that something is off about them. Considering how the three always finish each others’ sentences. And it just seems as though that they like messing with people and don’t want people to know happiness.

I think the moment, where you first get a true taste of the Queen starting to become who we know is when we see her send her trusted maid, Verona to another land. Verona had been by her side since the day, the Queen married the King and as the Queen herself says at one point in the book was like a sister to her. Now, I don’t want to give too much away about the book because I’d like to keep this spoiler-free because unlike film & TV, I’d rather not give away too much of a book unless it’s something like a picture book. However, I will say that the Queen’s demise is quite fitting as she dies as the Hag and has her spirit trapped in the mirror that her father once inhabited. Though as the book ends, you get the sense that she still loved Snow White.

“I love you, my beautiful little bird,”

Little bird was the Queen’s loving nickname for Snow White throughout the book and that opening quote that I used comes from quote a haunting nightmare sequence that takes place, when Snow White is now a teenager. The Queen sees her daughter as the 4 year old that she was, when the Queen married the King and was dripping blood as the Queen took her heart out. Now, that’s not the only creepy thing. The box that the Huntsman was given according to this book was the box that contained letters from her biological mother that the King had asked his Queen to read to Snow White, when she was older. In her blind rage, she had forgotten that. All in all, I thought this book was okay. It took a while to get into but it’s worth a look, if you like this character and seeing how she became the iconic villain that paved the way for all Disney Villains that followed her.

The Queen starts out as a sweet and caring mother to Snow White but through the course of this book, we see how she became the Evil Queen. (That is a point of contention I have with the book mislabeling her). Watching her descent into madness is eerie as you see her become evil and you just see how vain she had become. That she needed to hear that she was the Fairest of All. The mirror telling her that she was beautiful was her drug and drove her to downfall and she is now what she valued the most, the mirror.

The King gets killed off pretty early in the book but through the interactions with the Queen, you got the sense that he truly loved the Queen and that was something that the Queen was not used to as she had never been shown true love because of how much her father hated her.

Again, The Queen did truly love Snow White and even when the thought crossed her mind to off Snow White, she had to fight the urge because she still viewed her as a daughter but couldn’t stand the thought of her daughter being more fair than her.

The Magic Mirror was an interesting spin in making him the spirit of the Queen’s dead father. This is an interesting idea considering what we know of how the Queen’s father treated her growing up and how he despised her. Now here he is as a slave to his daughter and being forced to tell her the things, he never told her as a young girl.

These three characters are perhaps the most crucial to the story as they pretty much set the Queen’s descent into madness in motion. They’re creepy and you never truly know what they are after. They don’t really seem to have any motive other than messing with peoples’ lives for their own fun. I use plural for that because Valentino brought them back in her book about the Beast. Here though, it’s interesting, when we first meet them, the Queen hates them and asks them to leave the castle for scaring a young Snow but over time, it becomes a reluctant respect as they are the ones that provide the Queen with the magic and elixirs that allow her to become so skilled in magic. (Personally, I prefer the idea of her training under Rumpelstiltskin) and she uses those skills to turn herself into the Hag that tries to dupe Snow into eating the famed poisoned apple.

All in all, this was a good read. And if you like Snow White and The Seven Dwarves or The Evil Queen, I’d say that you should pick it up. I read it on my IPad. If you can’t find a physical copy, you can get it from there and it does the idea of exploring the past of a villain and what led them to become evil. It’s quite a good read for this time of year. Join me tomorrow for my first entry for 31 Days of Halloween. And I don’t want to say too much. Here’s a hint…. 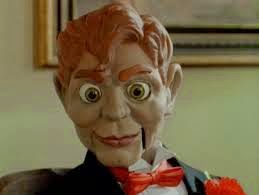 And no it, has nothing to do with the TV Show or the books.