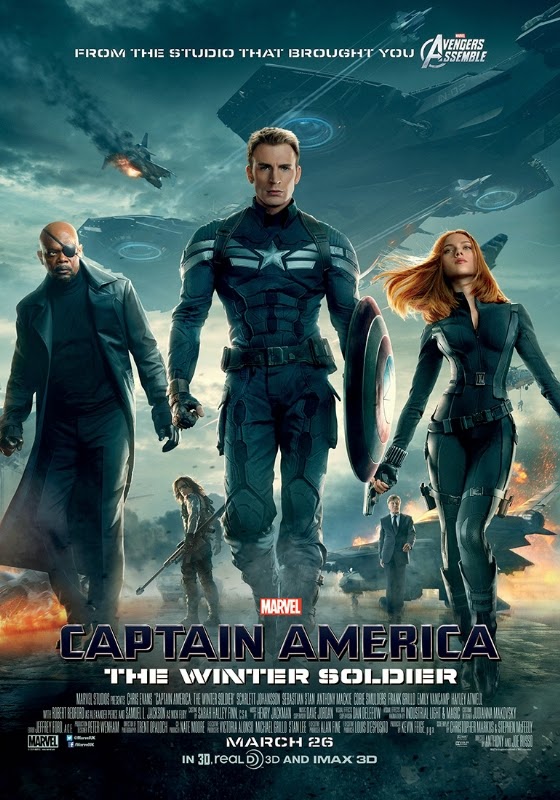 Plot: Steve Rogers struggles to embrace his role in the modern world and battles a new threat from old history: the Soviet agent known as the Winter Soldier.
——————————————————————

The Winter Soldier
Everyone probably knows who the Winter Soldier is so this really isn’t a spoiler. Well…it was supposed to be but now it isn’t so it’s in the grey area of Spoilerville. What I find really heartbreaking about Bucky (aka the Winter Soldier) is that he is fighting for a side just because he’s brainwashed. I really hope that Steve is able to help him soon after the end of this movie so that Bucky doesn’t need to take the journey to his memory alone. I know that in the comics, at least I’ve heard, that Bucky takes over as Captain America for a little bit. So I know that Bucky will fight for the right side in the end. To say that I adore all the cute headcanons that people make up about Steve and Bucky is an understatement.

Black Widow
It was great seeing Black Widow (aka Natasha) kicking ass again. Besides her kicking ass, her character was developed even further. She was calm when Steve was highly nervous about being on the run. It was Black Widow who had to make the call between keeping her secrets safe and striking against Hydra. And she made the right call. She was a strong character in this movie and I can’t wait to see more of her.

Hydra
Just…wow. Not to spoil what happens, but Hydra is sneaky as Hell. It’s a beautiful and scary thing to behold. One of the big info dumps happens when Steve and Natasha uncover a character who we thought was dead. That whole scene is creepy as Hell as you find out exactly what Hydra has been up to since the first Captain America movie. Those who watch Agents of S.H.I.E.L.D. will already know how far Hydra has gone, but this scene still serves as filling in a few gaps.

Final Thoughts
This was an awesome movie. There are mid and post credit scenes. So remember to stay until the very end. The ending of this film really makes me wonder in what direction the MCU will now go. I know they’ll do what they intend to do well, but I don’t know what exactly will happen. And before I go: On your left!