Around the 90’s, KaBlam was hugely overshadowed with other Nicktoons at the time and has now gained a cult following with its shorts. One of the shorts, Action League Now!, eventuallyÂ became a TV series which became absolutely worthless since it was just a rerun of the shorts and no new episodes. You may recall on this on my top 10 worst spinoff series list. Well, KaBlam was planning on releasing another spinoff series around the same time in the form of Stewy the Dog Boy. It was about a dog who disguised himself as a kid so he can attend school. If this plot sounds familiar, it’s the same as a Disney Channel program called Teacher’s Pet. 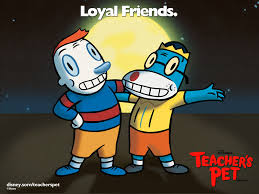 Back in 2009, TeenNick vice president Nick Cannon started a new developmental studio called The Chairman’s Lab where creators can create new shows. One of the shows that almost came out to TeenNick was a web series called Flip Flops. It was about two girls named Kat and Molly living their everyday lives going to school, hanging out with their friends, and get involved in wacky scenarios. However, The Chairman’s Lab was shut down and any programs that were going to made was discontinued. Flip Flops was the only show I found out that actually had episodes. Watching Flip Flops and my opinion on it was that it was okay. Nothing too great, but nothing horrible compared to the current live programs that are in Nickelodeon today. While Flip Flops would have been the first live action show since Just Jordan that doesn’t have celebrities, singers, actresses, or anything unrealistic that pretty much all the live action shows have nowadays, the show wouldn’t have been special and would’ve blended with the crowd.Â Plus, Nickelodeon would later on release other shows based on the internet such as Awesomeness TV and Breadwinners.

I mentioned this pilot on my list of the top 10 worst Nickelodeon spinoffs ever, so I won’t go too much into detail. Butch Hartman became very popular around the 2000’s with shows such as The Fairly Oddparents and Danny Phantom. Around 2004, he made an episode of The Fairly Oddparents that focused on the superhero Crash Nebula’s origins as a teenage boy named Sprig Speevak. It would have came out around the same time as Danny Phantom and since the concepts were pretty similar, Crash Nebula would have been redundant. Plus, after T.U.F.F. Puppy debuted, the viewers then realized how tired Hartman was after seeing how lackluster and disappointing the show was. More details about that show another time. So, I’m glad Nickelodeon rejected this spinoff. However, it’s a shame that they’re still milking Hartman dry. Speaking of which, we’ll get to that in the next number.

Oh yeah, you know it. The most recent rejected Nickelodeon show is my #1 program from Nickelodeon that I’m glad never came out. Why? Because as stated in the last number, Dan Schneider is the king of live action shows on Nickelodeon, but he hasn’t had a huge hit in over a decade. Sure, you can argue that Zoey 101, iCarly, and Victorious has their fans, but most of the people hate these programs, myself included. You already know how I feel about Schneider and Zoey 101 and iCarly from my reviews. As for Victorious and Sam & Cat, I’ll review them in the future. But let’s just say, they got progressively worse and worse as time went on. Like Butch Hartman, Dan Schneider has been pumping out shows left and right for Nickelodeon and his humor has really worn off. After iCarly ended its run, Schneider planned on two spinoff shows, one of them which based on the minor character Gibby Gibson.

Long story short, Sam & Cat debuted and Gibby was pushed into the sideline. Sam & Cat has recently been cancelled due to numerous controversial notes and Gibby was cancelled. Nowadays, Dan Schneider has another show called Henry Danger, which that show is already redundant and unnecessary since Nickelodeon already has a superhero program called The Thundermans.Â Gibby would have been an awful idea since the character was really annoying in iCarly and having a show based on him would have been awful. The plot was about Gibby working at a recreational center teaching 4 loser teenagers to be cool. What?! Gibby was the fat, geeky kid who was known for taking off his shirt, so what does he know about being “cool”? Does that make any sense? Nope! But Nickelodeon is still relying on Dan Schneider making all these uninspired shows with the same rehashed formula that were featured from his previous programs. It’s time that Dan Schneider either takes a hiatus or comes up with some new ideas. If not, Nickelodeon will eventually run out of ideas. According to recent news, the live action shows and Nicktoons are having their lowest ratings in a while with each program having 1.5 million viewers. What’s the program that has the highest ratings? Steven Universe from Cartoon Network.Â That’s just sad. Nickeodeon, while I’m thankful that you never released these programs, you need new ideas or else you’ll be crushed by the competition.

Which of these pilots or programs from Nickelodeon that you’re glad never came out? Post in the comments down below.