Kings of the New World 2: The Green Anaconda

In the modern world snakes are often associated with malice and deception relating back to the serpent from the Garden of Eden and the Medusa slain by Perseus in Greek mythology. But is this reputation deserved? After all in many lesser exposed cultures, such as those of ancient Egyptians, snakes are esteemed symbols of nature, power and reverence with many modern cultures continuing to worship snakes today. Perhaps the most infamous of all snakes is the Green Anaconda for its enormous size and power. In this article I will analyse if its malign reputation is well deserved. The severed head of the medusa.

The Green Anaconda is generally considered to be the heaviest snake in the world. Whilst the reticulated python can reach 7.5 meters in length a 5 meter anaconda would still outweigh the python. Anacondas show a large degree of difference in size between the sexes (sexual dimorphism) and the largest individual ever officially measured was a female 521cm long and 97.5kg in weight. It has been estimated that female anacondas have a maximum length of 6.7 meters before they can no longer reproduce. However there are numerous tales of titanic snakes stretching to lengths of 12 meters have been described by travelers. Although it is telling that a $50,000 dollar prize for a snake over 9.1 meters in length is as of yet unclaimed.

Anacondas show remarkable growth over their thirty year life spans and the average adult is 500 times larger than it was as a hatchling. To put that into context the average human new born is 3.4kg making the average adult 1.7 tonnesâ€¦ If we followed the growth pattern of anacondas, which we fortunately do not. Anaconda mating also brings us to a rather sinister tendency of females to cannibalise males. Even more harrowing (for a male anaconda) is that most cases have shown that the female had recently finished breeding leading to an unsettling hypothesis that opportunistic females cannibalise their mate in order to supply nutrients for the development of the embryo.

Much like the Jaguar, the anaconda is very at home in water and has both its eyes and nostrils situated on the top of its head allowing it to breathe and see its prey whilst remaining underwater. Belaying their sluggish nature on land anacondas are very strong swimmers although they are often known to drift down faster flowing rivers and swim to the side once they have found a favourable locations. The anaconda eats any species that it can restrain and commonly predates on smaller caiman species, deer, capybara, dogs, sheep, tapir and even Jaguar and human, although attacks on humans are very rare. Like all snakes their metabolism is remarkably slow and they can often go one or two months between meals. The record is held by a captive anaconda that didnâ€™t eat for an entire two years. 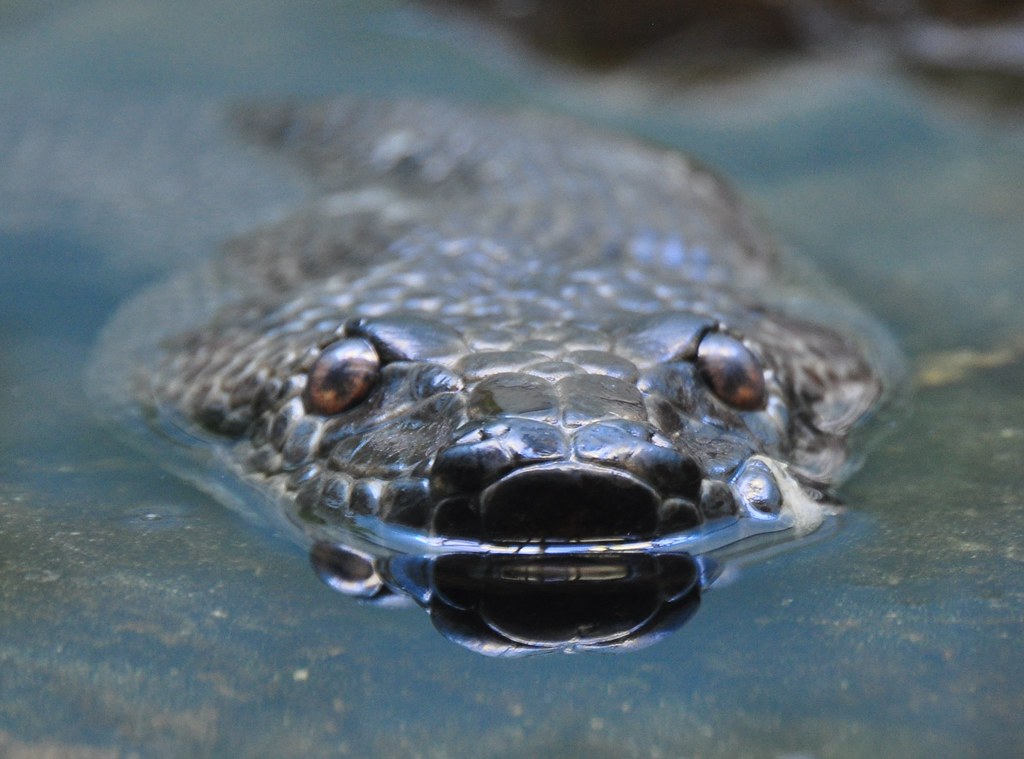 The infamous head reveals the aquatic oriented positioning of both eyes and nostrils.

A member of the boa family (and often known as â€˜the water boaâ€™) the anaconda shares a typical attack style with the other members of the family. Firstly the snake latches its jaw onto the prey item in order to pin it between over 100 razor sharp recurved teeth which point back into the snakeâ€™s throat keenly preventing the animal from escaping. The snake then wraps first one, then two coils around the prey item. In a nightmarish turn, every time the prey item breathes out the coils tighten making it harder and harder to breathe. An adult anaconda is capable of squeezing with around 65,000 Pascalâ€™s of pressure which is roughly equivalent to having a single decker bus placed on your chest (if we assume humans as the prey item in question). This, it hardly needs saying, is rather impressive for any animal, let alone one that is relatively small. The force that the enormous titanaboa (extinct snake, estimated at over a tonne in weight) could have exerted hardly bears thinking about.

Documented attacks of anaconda on humans are rather rare which is perhaps due to low population density in areas were anacondas are common and their habit of hunting nocturnally in the water which limits the human contact they receive. However there are several recorded attacks on field researchers. These attacks also seem to be predatory as the snakes are not disturbed prior to the attacks and were known to follow the target for several meters still submerged and so able to escape safely. It is also often the case that large disturbed snakes are often docile and rarely try to bite even when handled, although they will resist when being restrained and moved. The snakes also seem picky with targets, so far the only recorded attacks have been on smaller individuals who fall inside the weight range of anaconda prey and larger individuals have been ignored possibly due to being too large for the anaconda to swallow. All documented attacks have also occurred in areas that are seldom travelled by people.

Global range of the Green Anaconda.

This suggests that the anaconda seems to have no fear of predating on people, which a trait uncommon to most mammalian predators yet strangely manifested in some reptilian predators such as crocodilians. Does this suggest that the anaconda is the monster that it is made out to be by the numerous horror films snakes feature in? I would maintain not. The anaconda is simply a generalist and humans, which it encounters rarely, which happen to fall within its prey size range are simply a good way of recovering the energy deficit inflicted by giving birth or from long periods of starvation.

A model demonstrating how the green anaconda feeds.

The anaconda is a remarkable and terrifying creature but should it not be the goal of man to be able to look past simple emotional reactions and remember that, whilst intimidating, the anaconda has a majesty all of its own and is an animal just like any other and if any form of right to life exists the anaconda is just as deserving as we are.