Hello and welcome back to Classic Shorts Showcase. Today, we will once again be taking a look at one more Mickey short as we take a look at Brave Little Tailor Fun Fact: one of the knights in this short film looks a lot like Pluto and he actually speaks. So some have speculated that this is one of the few speaking roles for Pluto.

In this short, we open on a worried kingdom as a giant is coming and they are worried about him attacking. Tailor Mickey is having troubles with flies in his shop as there are seven and kills them with one blow. He opens his window and says that he killed seven with one blow and this leads the kingdom to think that he killed seven giants in one blow. The Pluto looking knight hears this and takes him to the King who wants to appoint Tailor Mickey as the kingdom’s giant killer and offers him 2 million dollars but he turns it down but then Princess Minnie offers her hand and Mickey can’t refuse. So our Tailor heads out to fight the Giant and take him down, at first he is unsure because he didn’t mean caught up in this mess as he watches the Giant from a short distance but he uses his tailoring tools and know how to take down the Giant and we end at a carnival with Tailor Mickey and Princess Minnie riding a carousel. This short had a rather cute story to it and again I didn’t bring this up but I was surprised to learn that this short was actually based off of a fairly tale.

I’ll be breaking this down into Main, Supporting, & Villain. With that out of the way, let’s get crackin’ 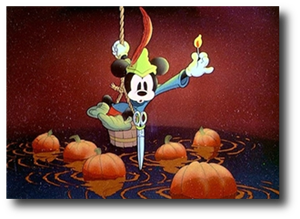 Mickey was interesting in this short as he got himself got caught in this mess because he never meant to become a giant killer but with proposal of Minnie’s hand and a kiss, he couldn’t refuse. Mickey was unsure of himself when trying to deal with the Giant but then he just used his tailoring skills to take him down and it was a lot of fun to watch him use his skills to take the Giant down 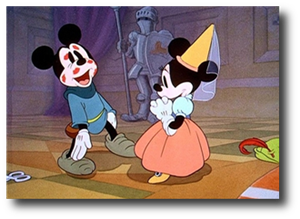 Minnie didn’t do a lot in this short other than inspire Mickey and she was cute in this short even if she was barely seen in the short. They had a lot of cute moments together in this short especially the ending. 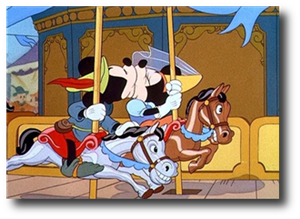 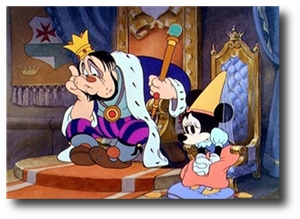 The King in this short came off as being comedic relief. Now that isn’t a bad thing and with this short, Mickey is the main star and really we don’t spend too much time in the kingdom once the story gets going. It’s not a bad thing as I feel that story works better with just the Giant and Mickey. 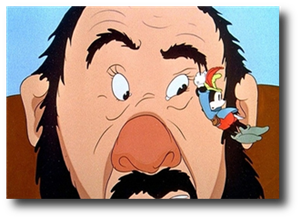 This Giant was a lot of fun and I loved watching him and one of the funniest things is when he smoked a giant cigar that he made out of hay. Also I’m happy that wasn’t censored in the version I watched as a lot of shorts these days have been censored and I hate that. This Giant truly was a threat once he saw Mickey he tried to squash him but Mickey using his skills and know how was able take down the Giant and he was just so much fun to watch and the end was so funny. But I do have to ask, why did the kingdom keep the Giant in the kingdom even if he is all tied up after his defeat because who’s to say that he can’t escape? Putting too much thought into this short. 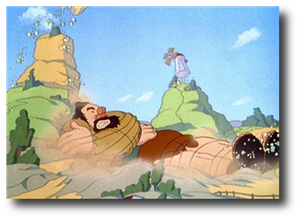 This short is a lot of fun and one that I can’t suggest enough. It is a lot of fun to watch Mickey take down the Giant, the way he does and the colors are just so gorgeous and while the story may be on the light side, it is a fun watch.