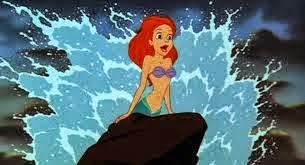 Hello & welcome back to A Look at Disney and back to Music Fridays. Ariel, I love her. She’s one of my favorite characters and today, we are going to take a look at some songs that she has sung. Now, seeing as she has quite a large discography, I do not intend to cover every song that she has ever sung as we would be forever, I’m narrowing this down to only two from the original film one from the TV Show, one from the cheapquels and one that I was introduced to via DisneyOtoko, and one from the Broadway musical and the song, that she sang in her appearance on Sofia The First. With that out of the way, let’s begin. Okay, I’ll throw in a deleted song at the end too.

Part of Your World

One of my favorite songs from the the entirety of Disney. What can I say about this song that I haven’t already said. DisneyOtoko and I did an entire Music Fridays dedicated to this beautiful song. This is the definitive “I Want” number as it truly immerses you into Ariel’s world and it just sends shivers up my spine each time, I listen to it because of how good it is. Though as good as it is, I’m more fond of the reprise

Part of Your World (Reprise)

I’ll never understand people who say reprises can’t have the same weight as whole songs, clearly they’ve never listened to some of Disney’s reprises because this shows how powerful reprises can truly be and c’mon, this reprise has one of the most iconic shots from the movie. This is the moment that I always associate with Ariel.

This song comes from an episode of the animated series, where The Evil Manta (voiced by villain extradorine, Tim Curry) as he tries to divide the kingdom and my thoughts, well it’s cute for a kids show. Don’t compare it to Menken and Ashman because you’ll be disappointed but for what it is, it’s quite good and sends a positive message about living & working together in well in harmony.

This is the one that DisneyOtoko introduced to me through his Mermaid Month series of articles from when he was first starting out and my first impression on it wasn’t too keen. I didn’t think it was very good and thought it was at best forgettable. It’s cute and has a good beat but I’m not sure that it’s not that’ll stick with me, once it’s done.

For all the issues I have with this film, particularly Ariel’s portrayal in this film, she does a good job with this song showing her motherly side. Even though, this is Melody’s song and I have said this before but when Melody sings I hear Bubbles and Twilight Sparkle. Chalk that up to Tara Strong voicing Melody. However Ariel’s portion in the song is really sweet as you can truly feel the love she has for her daughter.

Before looking up songs for this edition of Music Fridays, I had never heard this song. Apparently, this is Ariel’s introduction song in the stage show. And my thoughts on it, while it does let you know what Ariel wants in life, Part of Your World does that better and I can understand why this song is so relatively short because there really isn’t much to it.

I really like this song and I’m just amazed that Jodi Benson still has the voice to sing like Ariel all these years after the movie came out. She still sounds like Ariel here and does a great job capturing what made Ariel so majestic with her gorgeous voice and this song has a rather sweet message of not giving up and that no matter where you come families are important, whether you be from land or sea and that the love of family is a great unifier to bring people and merpeople together for a common cause.

Now, we come to our deleted song. This song would’ve been on land and have been sung in Ariel’s head. That does make me curious as to how they would’ve pulled that off and while I do like this song and I love discovering gems like these, it’s not of the better cut songs. Don’t get me wrong, I’m glad it has been released for people to hear but I’m okay with it being cut from he final version of the film.

There you have it, my look at songs sung by Ariel. Let me know in the comments, if you’d like to see any other Music Fridays focused on characters and their songs. I’ve now done Cinderella and Ariel. I’d love to hear in the comments what characters, you’d love to see featured on Music Fridays. I’ll let you know that I have a villain lined up for next month’s Halloween articles. Also,Â  if you are reading this on Manic Expression, I hope that you’ve been voting in the polls that I’ve been putting on these Music Fridays because starting next week,Â  I’llÂ  be looking at the polls of the previous 4 Music Fridays andÂ  whichever song got the most votes will be featured on theÂ  fifth Music Fridays.