It Came From the Drive In – The Road Warrior

When one thinks of the future, it used to be very positive and was seen to bevery happy and peaceful, but currently the only thing people think of the future is always of Decay and Destruction. Probably because of events that have happen throughout the world and many works of fiction that always tell of the End of World which most have always told of post-apocalyptic events that have destroyed a large amounted of the world whether it be Global Warming, Nuclear War, Zombies, or Machines gaining sentience and destroying the human race. This pretty much was help by a film series which Iâ€™m here to discuss: The Mad Max movies.

The series is one of the most popular and heavily influenced action series telling of a former highway policeman killing bad guys for vengeance and to survive the apocalypse. Its influence can be seen in almost any post-apocalypse film and helped launch Mel Gibson’s career. I’ve decided to take a look at the most popular film of the series: The Road Warrior. The film follows Mad Max (Mel Gibson) after the events of an apocalypse and how he tries to survive with his busted Double Barrel Shotgun and his Dog while trying to find to one thing everyone wants: Gas. He soon gets lucky when he finds a small outpost with an oil rig inside, but they are soon confronted by a large gang of Thieves and Cannibals called lead by The Humungus (Apparently that’s how it’s spelled for the film) where their leader tells them that to surrender the gas to them or else they’ll all die. So, Max decides to help them out against the Humungus and his gang in exchange for some of their Gas.

Oddly, the plotline for the film is very similar to a Western.

Upon first glance it might be hard to see, but after a second viewing it became very obvious. It even follows some of the standard traits: A mysterious stranger entering a small town, the small town is threatened by a gang of thieves and smugglers, and the stranger helps defeat the thieves. It was a bit strange knowing that they plot had the same elements as a film like Django, but somehow it worked well in the film.

With any action film, fighting is an obvious requirement and for this series, we are treated to violent Car Chases.

The Car chases are definitely some of the best parts of the film. All of the cars in the film are designed to kill anyone they encounter with attachments like Metals Plates for protection, Long Spikes to impale victims, Flamethrowers, Bombs, Live People used as shields, and many other things that definitely made the chases all the more interesting. (I wouldnâ€™t be surprised if George Miller got some ideas from Death Race 2000 for the movie.) They definitely stand out against earlier chase movies and will definitely entertain you throughout the film. Plus Iâ€™m probably not alone who will say that Maxâ€™s Pursuit Special is an awesome car.

The one thing thatâ€™s one of the most important aspects of the film is obviously Mel Gibson as Max.

Itâ€™s not very surprising on how Max has changed since the events of the first film when his family was killed. Before that, he was a normal person who fought against criminals as a Highway Patrolman in Australia. With the family dying, he became a bit like the Punisher and started killing the criminals mercilessly as a possible way of Vengeance.

In this, He is portrayed as a bit of a Burnt out Shell of a Man who is similar to The Man with No Name from the Dollars Trilogy, giving very little dialogue and does more actions to mainly help himself throughout the film. Eventually, he does grow some sympathy and decides to help the settlers against the Humungus, gaining part of his humanity again.

It definitely was a good start for regaining his emotions and Mel Gibson gave a great performance as the Road Warrior.

Another one of the more odd but iconic things in the film is the look of the filmâ€™s characters. 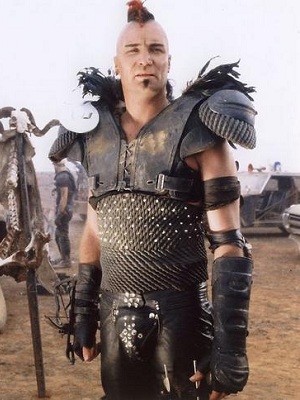 The characters in the film all wear heavy amounts of Leather, Make Up, and use of Bondage Gear make them look like Punk Rockers. The look definitely matches the characterâ€™s personalities since the Humungusâ€™ gang only does three things: Kill, Rape, and Loot anything and anyone they come upon. Max himself also had a lot of Leather on him which did help give him the look of a badass. Although, I think it was weird that The Humungus reminded me of Jason Voorhees. (Most likely because of the Hockey Mask.)

Final Thoughts: This movie is awesome. Mel Gibson was great as Max, the action scenes were fun to watch, the style of the film was cool, the cinematography was great, and it was an overall great film to watch. It definitely is one of the cult classics that I think everyone should see, as well as the other two Mad Max movies. Iâ€™m not much of an Action Movie Fan, but I always get enjoyment out of watching the Mad Max series. (I hope the new one will be good, although it probably wonâ€™t hold up to the Trilogyâ€™s reputation.)