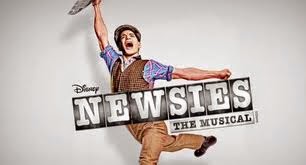 Hello & welcome back to A Look at Disney. One of my all time favorite musicals, ever is Newsies and you probably know that if you’ve followed this blog for any length of time as I’ve done numerous articles about the movie and the stage musical. Reflecting upon it, more while I love the movie, I must admit that I am a bigger fan of the stage musical and that is in part because Newsies: The Musical introduced me to this story and led me to find the movie. Even, if I did see the movie first. Alas, all good things must come to an end and after 2 very successful years on Broadway and a few Tony wins and culminating in bringing together even more Fansies, Newsies on Broadway played it’s last show, this past Sunday. And I have to admit that when I first heard the news of this show closing, I was sad. This is one of my favorite musicals and out of all the Disney stage musicals, I’ve seen, it’s my favorite. I’m happy that I had the chance to see it and I will forever carry the banner to make that world will know that this is a gem of a musical. I knew I wanted to pay my respects to this show and the best way, I know how. I’m counting down my Top 6 favorite songs from Newsies: The Musical. Now, this is a mix of songs that were written for the play and some that were carried over from the movie and made all the better. So for one last time, let’s grab some papes and try to sell the headlines.

Originally, I didn’t care much for this but it has grown on me over time and really works in setting up how Pultizier plans on screwing over the Newsies by raising the price of the papers to a price, he knows that they can’t afford. Just to make more money. It’s quite dastardly and does a good job of setting up the conflict. And does a good job of setting him up as our villain. Though, I must that I think the reprise is a little better as he gets to be a bit more confrontational with our lead character and one of the best Disney characters, Jack Kelly. You can just hear him kicking Jack, while he’s down and that is just brutal.

One of the biggest improvements the musical made from the movie was getting rid of the character of Sarah, who contributed nothing to the story. In the process, they also got rid of Denton, one of my favorite characters and merged the two into Katherine Plumber, a younger tough and smart female news reporter that goes against her father’s wishes and gives the Newsies a voice and she isn’t afraid to speak her mind as we see with this song. You can truly feel how she wants to do right but at the same time, she’s scared and that’s understandable taking in the time period because women didn’t have very many rights during the era, this wonderful musical is set in but Katherine will do whatever it takes to get the job done.

3. The World Will Know& Seize The Day

In many respects, these are the signature songs of Newsies and they just go together. In my mind, you can’t have The World Will Know without Seize The Day as both of these songs convey the frustrations of the Newsies and the anger that they are feeling. And honestly, when I think Newsies, these are the first two songs that go together and that’s why I had to put them together.

2. Something To Believe In

If you recall, my Valentines Day countdown of favorite Love Songs, this made it pretty high on the list and I still maintain that this is one of the best love songs from Disney as you can really feel the love between Jack and Katherine. It’s sweet, sorrowful and uplifting at the same time. It’s a bit simple in it’s delivery but that’s okay, that’s okay because you can truly the love between one of Disney’s greatest couples that just make you feel like there is love out there for everyone and it shows that love isn’t easy and their may be obstacles that you’ll have to face, if you want the relationship to work but they are worth overcoming for true love.

Folks, we finally got our headline.
“Newsies Crushed as Bulls Attack”
Crutchie’s calling me,
Dumb crip’s just too damn slow.
Guys are fightin’, bleedin’ fallin’
thanks to good ole’ Captain Jack.
Captain Jack just wants to close his eyes and go.
Let me go.
Far away.

I opened this number with the opening lyrics of this song because this has to be the rawest, Jack ever gets in the musical. It’s just heartbreaking as you can hear Jack’s world has crushed down on him and the only thing he has is Santa Fe, which to him is an escape from the nightmare that he is constantly living. Honestly, compared to the movie version, this version does it better. It doesn’t hurt that the show had a better actor in both Jeremy Jordan (heard here) and Cory Cott, then the movie’s Jack played by a good Christian Bale but Jordan and Cott are a little better and as you can hear, Jordan really gets the emotion of this song down to a t and just makes it tragic and my heart just breaks for the guy.

I hope that you’ve enjoyed this list. I know it may seem that I put the movie down a little bit but don’t misunderstand me, I love both the movie and the play and if it weren’t for the movie, I wouldn’t be the fan I am today but the play holds a truly special place in my heart as does Newsies in general. Let’s take a look here, I own the Original Broadway Cast Recording, a Newsies Cap, which I used for my Halloween costume last year. A Christmas ornament from the show and whenever I listen to these songs, I’m usually wearing my Newsies Cap and singing along imaging myself as one of my heroes, Jack Kelly. Yes, I said that. Jack Kelly is a character that I respect so much because of what he went through and how he brought the Newsies together and proved that even if your voice is small, if you yell loud enough, you will eventually be heard. It’s that never give up attitude of his that I truly admire and I am beyond thrilled that I had the opportunity to see this wonderful musical before it closed and I think I’ll leave you with this, Disney On Broadway posted the final curtain callÂ  for this fantastic musical and it’s worth watching as you can feel the love that these actors have for this show. I’ve followed this musical for ages on their Facebook page and various other videos and losing this musical feels like I’m losing something special. Now, they aren’t closing up for good as they will be touring. So, if they come to a city near you, please take the time to see this show as it will be worth your time and maybe you too will Seize The Day.