Here’sÂ  an old reviewÂ  of aÂ  fan made MLP short that never got posted to the old site.Â Â  I’m considering doing a Top 6 Fan Animation and this may be on the list.

Hello & welcome back to Trotting Through Life. It’s a been while since I looked at a fan animation and the last time, I did I didn’t have very many nice things to say about it. Today that is not the case as I’ll be taking a look at the rather adorable two and a half minute short, Derpy’s Toy. Derpy Hooves or Ditzy Doo or Fan Favorite (Some people call her that but I refuse) is easily the most popular background pony from the show. And I can see why….now. Let me give you some background on my feelings regarding this background pony. For the longest time, I hated Derpy. I couldn’t even understand why someone would even have a favorite background pony but then I found Lyra Heartstrings (still need to do that article, that’ll be the next one, I promise) and my hatred for Derpy started to melt away because of my love of for Lyra. I no longer see Derpy as this annoying little pest that I viewed her as for so long, but rather a mare who just happens to look funny but tries her hardest. With that out of the way, let’s get to the meat of the review, and here’s a link to the short in question.

The plot is pretty simple and straightforward. For fans of the show, just imagine this takes place in an alternate universe. Trust me, it’ll help. It is recess at Ponyville Schoolhouse and our sweet little Derpy filly is playing with her new horse and carriage toy, (which look a lot like Pinkie) but some other little filly, who was playing some game that involved wearing a blindfold and tripped and broke Derpy’s toy. Miss Cheerliee (love her) saw this and knew Derpy was upset, so she wanted to cheer up her student. This is why I said imagine it takes place in an alternate universe because in show, Cheerliee is shown to be the same age as most of the adult mares such as the Mane Six or in this case, Derpy. This is made all the more confusing considering that filly Rarity has a cameo in this as a student. Though, we know that Rarity and Cheerilee wear in the same class together from Miss Rarity’s flashback in The Cutie Mark Chronicles. It’s a minor annoyance at best and if you do, what I suggested, it won’t take you out of the story too much. And why am I not being so hard on this, the maker of this short apologized for their error. So, they realized their flaw. That’s more then some big name makers do. Anyways back to the story at hand, a young unicorn colt sees Derpy’s toy break and sees the janitor about to throw it away. (The Ponyville Schoolhouse can afford a janitor, I would never thought that with how small the tow is). He picks it up with his magic and decides to fix it and give it back to Derpy. Oh, I should mention that it was just the carriage that was broken. Anyways, he goes over many books and fixes it and I’m presuming that it’s nighttime, he gives it back to Derpy. The smile on her face at having her toy back is just so adorable. And also the young colt, got his cutie mark. The following day, the young filly that broke her toy, gives her an apology note. Now, you may be wondering, why she didn’t just say it. This short had no dialogue. Oh, sure it had background music such as instrumental pieces from a show and oddly a level up video game piece, when Derpy’s toy was given back to her. But as someone that loves pieces of short animation and has watched many classic shorts that do not feature voice animation and instead rely on the character’s movements and actions, to convey the story, I loved this. The fact that there was no dialogue in this short is my favorite aspect.

Now there are really only two characters to go over & I could only find a picture for one of them. Ah, well. 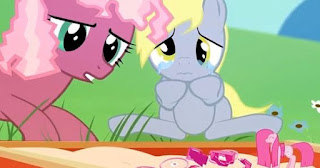 Aw, I don’t like see any little kid crying. I just want to give Derpy a hug and tell her that it’ll be okay. Okay, weird fact, the day before I watched this I read a fanfic where Derpy, Cheerliee, and Lyra were college room mates. So, do you know how taken aback I was to see this. Anyways back on topic, while some may excuse this short of playing with your emotions. I don’t care, I mean most of us have been there, we thought we lost a favorite toy or it was broken. Heck, I’m 24 years old but whenever I think I lost my stuffed Mickey Mouse, I turn into a panicked five year old trying to find him. So, I can totally relate to what Derpy is going through because this is something most little kids experience. This short just like the show did a great job of dealing with a real life situation that young children may face. And I’d be okay showing this to a young one because I feel that they’d gain something from it and understand why Derpy is upset.

The young unicorn colt that rescues Derpy’s toy from being thrown away is a nice touch to show that no matter how young, we can always look out for one another and be there to help one another. The way, he put so much time into fixing Derpy’s toy was beautiful and very touching. Showing how much that he was willing to help another student.

I very much loved this short. It is one of the best pieces of fan animation, I’ve seen in recent memory. This is very good. It is simple and quite beautiful or as I would say beautifully simple. And there is nothing wrong with that. Because simple can be a good thing, this is something I suggest to all fans. Peace!