Nicknamed the â€˜terminator pigâ€™ this hulking brute of an animal was a member of the ungulate family that today includes pigs, giraffes and deer. It had enormous bony flanges similar to the warts of the warthog which accompanied its titanic jaws giving this predator a bone crushing bite in addition to its fearsome tusks.

This great serpent emerged just after the demise of the dinosaurs in the Paleocene epoch and was estimated at 15 meters long and a weight of 1135kg making it easily the largest snake that has ever existed which would not be vexed in the slightest by swallowing a comparatively measly human.
3.Â Deinosuchus: One of the three largest crocodilians to have ever existed Deinosuchus could have reached lengths of twelve meters and lived alongside tyrannosaurs such as the fabled T.rex and is theorised to have predated upon the dinosaurs that unknowingly came to drink from cretaceous watering holes. Okay, maybe it wouldnâ€™t have fitted in a dark alleyway but such a creature does not deserve to be neglected.

The largest flying bird to have ever lived had a wingspan of around seven metres and would have likely scavenged and displaced Mioscene predators from their kills. Itâ€™s skull morphology suggests it was suited to swallowing prey whole so whilst humans may lie someway from its preferred prey it would still make for an intimidating site emerging from the darkness.

The legend of the yeti has fascinated many people throughout history and there seems to have been no better candidate than Gigantopithecus. This ape stood at around three meters tall and while itâ€™s teeth indicate it was exclusively vegetarian an unexpected encounter with such an enormously powerful ape would be far from desirable. 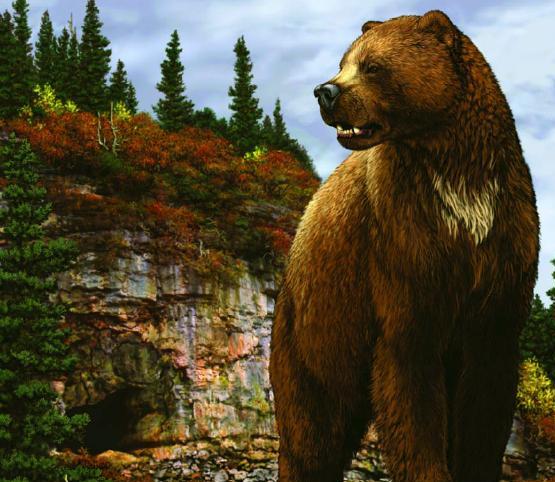 Arctodus Simus, the giant short faced bear could look you in the eye whilst still remaining on all four legs. If the titan deigned to stand it would have easily reached three meters in height. Around 11,000 years ago Arctodus Simus is proposed to have filled the niche of a kleptoparasite; intimidating smaller predators such as dire wolves, Smilodon and american lions from their kills with its enormous size and strength

There had to be at least one therapod (clade to which all carnivorous dinosaurs belong) dinosaur in here. Considering T.rex or Giganotosaurus would find it near impossible to fit inside an alleyway weâ€™ll take the lesser known Utahraptor. The velociraptors in Jurassic park may have been greatly exaggerated in size, being in reality the size of a turkey, but Utahraptor dominated even these exaggerated raptors reaching seven meters in length and with a sickle claw nine inches in length clearly indicating this 126 million year old predator could disembowel a human with consummate ease. Okay so maybe Iâ€™m pushing the premise of â€˜a dark alleyâ€™ with an animal as gargantuan as Fasolasuchus but a creature this macabrely magnificent is worth the stretch. Before giant carnivorous dinosaurs the world was ruled by very different reptiles. The largest and most intimidating has to be Fasolasuchus from the rauisuchid family (closely related to crocodiles). Stretching from eight to ten meters in length Fasolasuchus lays claim to the title of largest terrestrial predator bar the titanic therapods of later. Similar to other rauisuchians the animal had a row of bony osteoderms down its back to protect from attack by other predators. However these were reduced to a single row rather than two in Fasolasuchus reflected its size and dominance of the ecosystem.

The size of this giant monitor lizard is difficult to determine as several studies place the weight anywhere from 300kg to nearly 2 tonnes. Regardless Megalania is still a monster compared to any modern day lizards. With heavily built limbs and a huge skull full of viscously serrated teeth it is proposed to have hunted Australian megafauna such as Diprotodon the â€˜giant wombatâ€™. If that wasnâ€™t bad enough it seems likely Megalania, akin to modern monitor lizards such as the komodo dragon, was venomous making Megalania not only the largest terrestrial lizard but the largest venomous vertebrate to have ever existed.

Roaming the African plains of the Miocene was an ancient hyena nearly twice the size of a modern lion. Dinocrocuta has an estimated weight of 400kg and had a skull over half a metre long. Several studies have proposed that, like modern hyenas, this giant relative used its huge jaws to crush bones in order to extract maximum nutrition from those animals unfortunate enough to become its prey and at 400kg the animal could have easily predated upon even the mighty rhinoceros species sharing its habitat.

Picture a three meter tall bird with a skull 28 inches long, 18 inches of which was composed of a beak that was used in the same manner as an axe to inflict debilitating injuries on its prey and you get a rough idea of why it might be a good idea to stay the hell away from Kelenken. Belonging to the aptly named â€˜terror birdsâ€™ this particular animal had the largest head of any bird known and was theorized to have either delivered viscous hammer blows to crush the bones of large prey or grab hold of smaller prey and shake them in much the same way that a dog might shake a rat today with the small addition that Kelenken would usually end up breaking the back of the unfortunate organism. By far the smallest animal on this list Euchambersia was a reptile that lived before the dinosaurs in the Permian period 250 million years ago. Euchambersia was a member of the therapsid order of reptiles which included the ancestors of modern day mammals and are often referred to as the â€˜mammal like reptilesâ€™. Despite its small stature this predator had an ace up its sleeveâ€¦ Venom. The large canine teeth clearly exhibited by Euchambersia had venom grooves connected to venom glands in a very similar way to modern snakes in order to inject venom into the prey upon biting down. This killing strategy made Euchambersia a force to be reckoned with in the Permian deserts of South Africa.