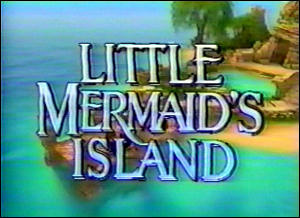 Man this has got to be one of the most obscure things that I’ve looked at to date. First off, I’d like to thank DisneyOtoko for telling me about this. Little Mermaid’s Island was live action show with puppets that was proposed in the ’90s by none other than the father of The Muppets, Jim Henson. Two episodes were shot but never aired. However you can find a short video of it online. Now this article will be a bit different as it won’t be a regular review but rather just my thoughts on it and there are a lot of pictures to be found, thanks to Muppet Wiki Now the first thing I noticed is that this show was really and I mean really loose with continuity in regards to the film as Prince Eric is nowhere to be found yet not only do Grimbsy and Max appear in this show but it appears that the characters know them. Now this wouldn’t be an issue with me but Ariel is still a mermaid in this show and in the film, she didn’t meet these characters until after she was turned into a human by Ursula.

The Max puppet was actually Ambrosius from Labyrinth. A movie that I will admit to not seeing but as for my feelings on a puppet being reused, well in some ways it reminds of when Disney would reuse animation to cut corners and to me it’s not a big deal. If it was meant to entertain I could get past that but I can’t past the fact that Ariel and her friends know these characters and Ariel is still a mermaid. I just can’t wrap my head around that one. Now there were two characters introduced to the series and normally I wouldn’t have an issue with except for the fact that one of the characters is Flounder’s twin sister. Excuse me, when I say huh?

My issue with this character is that I just don’t see the point to her. Sure, you could argue that Ariel didn’t have many female friends but my counter argument would be why not use one of Ariel’s sister. Sure, Ariel is the youngest but really using one of her sisters could give those characters development and even in the animated series, they’re more or less recurring characters. Mind you, that’s not a hit on the show but rather just an observation. Now I have to say that the best looking puppet that I’ve seen from the stills is Sebastian but that doesn’t surprise me as he in my mind seems to be the most natural to adapt to puppet form. Now none of the puppets look bad, I mean this is Henson so I wold expect nothing less and oh, sorry for not touching upon the other character but really, I had stronger feeling regarding Sandy. Anyways, here’s Sebastian.

There is just something about the look of Sebastian as puppet here that is gorgeous. This one literally looks as though he jumped out of the film into our world. He is just so amazing to look at and I had wondered if he gotten a second life in Voyage of The Little Mermaid but sadly no, that does not seem to be the case. I should also mention Sebastian’s original VA (voice actor) Samuel E. Wright did return to voice Sebastian for this show as did Buddy Hackett as Scuttle. Disregarding my disdain for that character, it’s nice to see that they were able to get the original VA’s.

Now I’m sure the big question on everyone’s mind is how does Ariel look? Okay but I can’t get over the puppets. Now they did make a slight tweak to her outfit which is kind of understandable seeing as this is children’s show. In this version, Ariel does not wear her seashell bra and instead her outfit is entirely green. Which is a bit weird but probably thinking too hard.

I’m kind of bummed that this show never got to see the light of day because I think this would have been the best puppet show from Disney using their characters. All of the puppets are just so much fun to look at and they have the Henson quality to them. Now one of the big factors that this show never happened is the main reason a lot of other Henson projects that were planned with Disney never happened. Due to his untimely death. Now I can’t judge this fairly as there have never been a proper release but just looking at these puppets makes me think that it would’ve been fun save for the character of Sandy and the loose continuity. What are your thoughts on this, do you think it would’ve been good or not? Tell me in the comments. Peace!