Back in the ’80s, Comic book publishers often put their characters that would be often psychologically torment them and would be involving some kind of tragedy. Aside from DC having Batman, Marvel would use this often with one of their newest comics of an antagonists turned anti-hero: The Punisher.

The Punisher is a US veteran turned vigilante who turned to fighting crime after his wife and two children were killed by the mob and often used his various and large amount of weapons and originally existed to take out Spiderman. He floated a bit in the same boat as Batman at times, except when Batman had a thing against killing people, The Punisher had absolutely no problem doing so and often times enjoyed it.

From time to time, he would appear in Animated Shows and he eventually got a film adaptation which was the second Marvel character who got an adaptation, unfortunately the first was Howard the Duck.

The things youâ€™ll hear about this film are mostly negative which isnâ€™t very surprising for the majority of films created before the Marvel Cinematic Universe was created. Add in the factor of it being an 80â€™s action film where muscle-bound actors like Schwarzenegger and Stallone ruled the screen and you get an odd comic adaptation. This will be interesting. Frank Castle (Dolph Lungren) is a former police officer who turned to vigilantism and has donned the name “The Punisher” after his family was killed in a mob hit. With a killing streak of 125 years, he has become an extremely wanted man while waging a one man war against organized crime. With the arrival of a Yakuza gang who kidnap a mafia group’s children, the Punisher is convinced to save them.

Well, it’s pretty obvious what the main problem of this and the other early Marvel films are: They had no idea what to do with their Heroes.

Howard the Duck got the Fish out of Water plot, Captain America looked like a weak asshole, and they gave the Punisher the job of going after children aside from going after the Yakuza gang instead. Itâ€™s very out of character and it doesnâ€™t make him as intimidating as he should be.

Another thing that the film tends to do is almost abandon or change their backstory. The only thing that this film that this film had in common with the original comics is the fact that Frank Castle is the Punisher and his family is dead. Aside from that, they pretty much make up everything on the spot along with all of the characters in the film. Overall, it ends up being a completely poor use of a comic book character.

Besides, would you trust this man to take care of your kids? 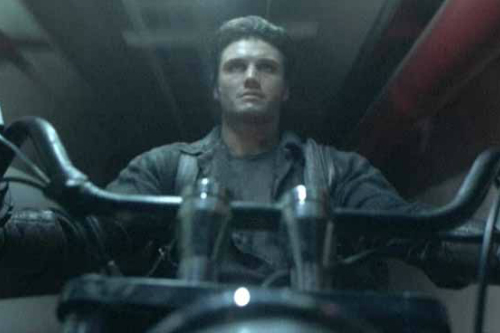 With a Comic series like the Punisher, it’s almost expected for it to happen, but there were some problems with this performance. Sometimes I could barely make out what he said and he acted like he was possible drunk at times. He sounded a lot like if you mixed Schwarzeneggerâ€™s voice with Stalloneâ€™s voice. Although, he didnâ€™t really give a bad performance as I might be hinting at, it could have been much better. Besides, I think Reb Brown could have been an awesome choice since heâ€™s had some superhero experience as Captain America in the â€˜70s.

The action scenes in the movie were incredibly dull. They were very predictable and could determine the outcome of all of the scenes. It basically ended up being Dolph just holding his finger on the trigger and never missing a single shot while the bad guys missed all the time. Plus the film barely showed any of these action scenes. There was a few in the beginning, one in the second act, and a final fight against the yakuza. It ended up as an Action film without the action.

Final Thoughts: This was Bad. I couldnâ€™t enjoy any aspect of this film. The Action was dull, Dolph was dull, and itâ€™s one of the Marvel films you wish didnâ€™t happen. Somehow, I barely got more enjoyment out of the other two Punisher films than this one.