Space is awesome. Literally, it brings awe. There’s so much weird shit out there that the most minor of discoveries will BLOW YOUR FUCKING MIND. That’s why I tended to write a lot about the subject. There’s always something amazing to bring to people’s attention, whether it’s something far beyond the reaches of our most powerful telescope, or something right here on Earth.

This article was written relatively early in my blogging days. While most people know that space in infinite, their knowledge of what we’ve found doesn’t extend much further than where man has stepped. I wanted it to be an introduction to the reader about my interest, perhaps make others interested in a subject that they don’t think about much. What better way to hook an audience than a list of bizarre shit? That’s right. You couldn’t think of anything either.

(NOTE: Some of the science may have changed over the years because…science…but for the most part a lot of this information remains true. Just don’t judge too harshly if you have a “Heyyy! That’s not true anymore!” moment. It’s my decision not to go back and re-edit and re-research these articles and I’m more than willing to live with that.)

When I’m not watching movies, playing video games or funny third thing, I research A LOT about space. I was one of those kids who lay on the grass (when I had it) looking up and pondering about those little sparkling dots in the sky. Whole stories played out in my head. Sometimes I was an explorer coming to grips with the wide black surrounding me. Other times I was on a star ship, observing for the first time a super nova at a closer distance. Over time, these day dreams (night dreams? Would they be normal dreams?) faded. Not because I stopped thinking about space, oh no. If that happened, this article would end here and that would be that. I’m not letting you all off so easy.

As I got older, I got answers for most of the questions I asked. Some of it I didn’t understand. The vernacular would throw me off, and since I suck at sciency stuff to begin with (love it, but unless there’s a layman’s way of explaining it, I’m left there waving a little flag going “yay science!”) I’m unable to explain a lot. But I LOVE this shit! I wasn’t going to give up so easily!

Eventually, I was able to figure out a lot of stuff. There are great web sites and podcasts to learn metric SHIT TONS of stuff about the worlds outside our world. The funny thing is that there’s a place where the knowledge stops and scientists have to skirt around a few issues to do other science things (like finger bang Alf I guess). In time, they’ll probably figure out what’s going on (or perhaps their kid’s kids will…like how exactly one finger bangs Alf), but for the moment they have to utter the dreaded “I don’t know”.

This doesn’t mean that science gave up. They just don’t know. Some of the shit they come across is just way too interesting to give up on. Sticking to it solely would distract from other things like, faster space propulsion, extra solar weather…finger banging Alf (that’s it I swear! At least until I find it funny again). Here’s a short list of some of the strange things in space that have baffled scientists:

But it wasn’t until 2006 that the Cassini spacecraft took a look at the south pole of the planet. It was just puttering along, minding it’s own business when…

Voyager noted strong jet streams in the south pole regions when it did it’s flyby, but you know what it didn’t see? A motherfucking hexagon! Scientists have managed to make conditions in the lab that can simulate a hexagonal storm here on earth, but how the motherfuck did one larger than Earth get on Saturn?

4. Temperature of the Sun’s corona.

The Sun’s pretty badass, right? It’s sooooo far away, yet it provides those great beach days when our little pebble of a planet happens to be tipped the right way. There’s so much awesome stuff about it that you probably wouldn’t bat an eyelash if I told you that the sun has an atmosphere and that it’s temperature is about 1-3 MK (million kelven). No? What if I say that the Sun’s surface is only 5800K and that the second law of thermal dynamics prevents the surface from heating the corona that much?

Imagine a light bulb. Now imagine that you can’t touch it because the air around it is hot, not the bulb itself. You’s be saying to yourself, “how the fuck can this be so damn hot if the bulb itself isn’t hot?!?” before shattering the damn thing with a broom and trying to take out the rest with a potato. That’s the mystery behind the sun’s corona.

When an asteroid hit Chicxulub in the YucatÃ¡n peninsula, it released a whole bunch of horrible gasses along with the general devastation. At around the same time, a motherfucking Super Volcano (because that’s a fucking thing!) EXPLODED! Other horrible shit happened at the same time as well and because of this about 95-99% of everything fucking died.

And this was only one of the extinction events. For some reason, this shit keeps fucking happening and we don’t know why. Every 60-65 million years, everything gets wiped out and the Earth starts over with whatever happened to survive. Some scientists don’t believe this and will show the fluctuations in the data, but what they can’t deny is that regardless of how long it takes, everythingÂ  fucking dies. The scary thing is that we’re overdue for our deaths.

Mars has still has an atmosphere. Like the death grip on Charton Heston’s gun (I’m sure of it) Mars won’t let it go. In 2003, NASA’s Goddard Space Flight Center detected trace amounts of methane in the atmosphere of Mars. The Mars Express Orbiter confirmed this in 2004. That’s a confirmation of methane present after an entire year. 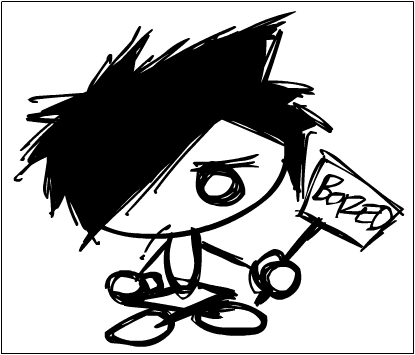 Methane breaks up very quickly when exposed to ultraviolet light, like say, from the sun. Something is replenishing the methane on the red planet.

There are geological explanations, but we’re talking about Mars here. There’s not very much going on in that department. Scientists are looking for companion gasses to explain the present amount of ever present methane, but haven’t had much luck.

There’s one explanation that fits, but there’s no evidence. Scientists never disprove something with a lack of evidence, but they can’t use it when developing a hypothesis because if the evidence doesn’t ever appear, they’d basically be making shit up. And that’s not how science works. What is this great, but yet unfound explanation?

Again, no evidence and you can’t prove what you can’t find. But if life turns up on Mars, chances are this is how we would find it. Until then, it’s still a great mystery.

1. What happens when we enter a black hole?

The idea of a black hole goes back to 1783, but it’s not until the 20th century that we’ve really been able to put together what a black hole really is. We can’t directly observe a black hole (it’s black, duh) however we can observe what it does to it’s surroundings. It feeds, causes gravitational lensing, causes orbital patterns in stars despite no mass seen…so we know they exist.

But what happens when we cross the event horizon? We have lots of thoughts and math, but no explanation. For all we know, there’s a sentient ham sandwich waiting for us.

The best idea we have is that once you cross the event horizon, the strong gravitational pull on space time causes you to slow down…from the outside. You wouldn’t notice anything. Well, at lease until you were pulled apart atom by atom in a process calledÂ spaghettification. You might even go back in time due to the closed time like curves caused by the gravitational effects on space time, but you’d be so fucking dead!

So there you go. Space and all it’s wonders. When it’s not trying to kill you, it’s pretty damn cool. Keep on dreaming dreamers!