I absolutely love the music of Weird Al Yankovic. The film tells of George Newman (Weird Al), is a young man with a highly active imagination which often gets him fired from many jobs. One Day, His gambling Uncle Harvey eventually wins the deed to a bankrupt UHF Television Station. After being â€œConvincedâ€ by his wife, Harvey lets George become the Manager of the station and head of Channel 62. He eventually finds out about the VHF Station and its manager R.J. Flecther (Kevin McCarthy) who is not very pleased of the idea of his station and its rapidly developing popularity as he tries his best to wipeout all means of competition.

The Plot of the film seemed to be rather generic. The story was pretty much a predictable battle of Television stations that also including the overused financial issues plot element that ended the film. Plus the film relied mostly on the sketches and parodies of the film help it move along.

The Film shows off Weird Al’s main talent of making parodies and it is full of them. Since the film tells of a TV Station, we get lots of TV Show Parodies such as Wheel of Fish, Stanley Spadowski’s Clubhouse, Town Talk, Inside Al Capone’s Glove Compartment, and many others scenes that are cutaway gags.Â Â  The film parodies are mostly imagined inside of George Newman’s head or on a commercial for the Television Station as well as characters saying lines from films. Plus he also does a parody of the Dire Straits’ song “Money for Nothing” making it about the Beverly Hillbillies.

I have to admit that a lot of the humor seemed a bit Hit-or-Miss for me. I thought some of the parodies were long (mainly the movie parodies) and many of them were mainly focused on dumb humor (I donâ€™t really care for it very much.) Although, there was still sketches in the film that I thought were funny. So I guess that aspect is a bit of a Mixed Bag.

One issue of the film some critics had was actually Weird Al himself. 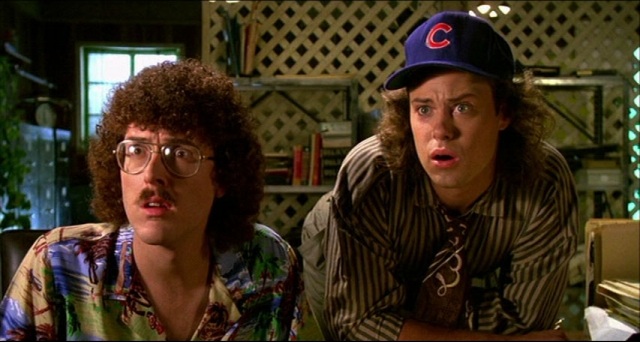 Some say he didnâ€™t have much of a screen presence and he probably shouldnâ€™t continue acting. Personally, some of his scenes do fall flat for me though, but aside from that he gave a decent performance.

Plus the film was packed with a lot of characters actors that end up a majority of the spoofs and homages in the film like David Bowe, Fran Drescher, Michael Richards, and a bunch of others that might draw your attention if you donâ€™t like Alâ€™s character.

FINAL THOUGHTS: I thought it was Okay. The humor was mostly a mixed bag, the plot was predictable, the acting was decent, and I really couldnâ€™t get angry at it since it ended up being fairly accurate to what I was expecting. So, I guess that it could make some people laugh a lot more than I did. Iâ€˜ll stick with listening to his music.