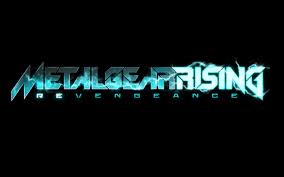 When it was announced back in 2009, many fans of the Metal Gear Solid series wereÂ skepticalÂ of an action oriented take on the franchise. Â They were unsure of how the stealth oriented series would be able to work within an action game. Â After the game was initially canceled in 2010 due to difficulties in the development of the game, Â PlatinumÂ Games took up development duties. Â Reactions to this were mixed with many scratching there heads, feeling that Platinum Games style would not fit the franchise. Â It was eventually released in February 2013 to positive reviews and audience response. Â How does this action oriented take on the Metal Gear Solid series hold up?

Taking place four years after Metal Gear Solid 4, you play as Raiden, the protagonist of Metal Gear Solid 2 who was turned into a cyborg before the events of MGS4, who now works for PMC Maverick Securities, along with several other colleagues, who are fighting against rival PMC Desperado Enterprises, who want to destabilize peaceful nations and create war in order to reap theÂ financialÂ rewards and technological advancements of the war economy. Â Raiden is later joined by the robotic canine, Bladewolf, who is initially programmed to fight Raiden but later joins forces with Maverick to help fight Desperado. 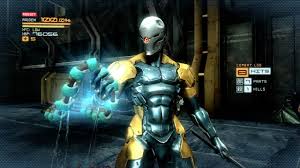 The story is a tad more complicated than the plot summary shown above will make you believe. Â That is unfortunately where the story suffers. Â While there is some sharp social commentary with the effects of war on the world as a whole and how it affects innocent civilians indirectly, it is buried under a muddled and overly convoluted story. Â This is not helped by the fact that the new characters introduced in the game are one dimensional and underdeveloped with the exception of Bladewolf, whose straight man presence is a welcome addition. Â Thankfully, unlike other games in the series, cutscenes are not as long as a typical short film so it is not as intrusive to the game as it could have been.

Unlike the MGS games, Metal Gear Rising is a more action oriented take on the series. Â While a few stealth elements from the main series are in the game, MGR is a fast paced action game at the end of the day. Â Platinum Games bring theirÂ recognizableÂ style to this game that was also in their previous games like Bayonetta, MadWorld, and Vanquish. Â MGR is a very interesting take on the action game and really stands out in many ways. 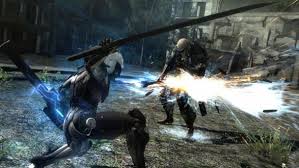 One of the unique things about MGR is the cutting system, which allows Raiden to engage in melee combat. Â In addition to fighting enemies using melee combat, you can also use sub-weapons such as a dagger, a rocket launcher and others that are unlocked or are obtained by beating the game’s bosses.

In addition to the cutting system, the game also features Blade Mode. Â Blade Mode allows the player toÂ preciselyÂ slash enemies and objects along a geometrical plane using “free slicing”. Â Entering Blade Mode will result in a target particle that takes the form of a transparent blue square that the player can rotate and move, with tracing orange lines across the area where the slash will hit. Â It can also be used to enter bullet time, which allows Raiden to have theÂ opportunityÂ to slash enemies from multiple angles before they hit the ground. This can be used strategically to finding enemy weak points, severing support beams to cause the ceiling to collapse on enemies, deflect enemy fire, and destroy objects to remove enemy cover. Â However, using Blade Mode reduces Raiden’s energy to a point where Blade Mode is unusable. Â During some time in Story Mode, the player will be able to enter Ripper Mode, which increases Raiden’s power for a short amount of time, which takes advantage of Blade Mode. 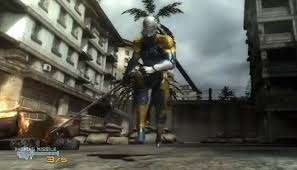 While the features listed above are definitely important, the ability to parry is essential to being able to defeat enemies and even beating some of the more challenging bosses in the game. Â Unlike other action games, MGR does not use blocking inÂ lieuÂ of the ability to parry enemy attacks. Â To parry, the player needs to press the light attack button while also pressing the leftÂ analogÂ stick in the stick of the upcoming enemy attack that the player wants to parry. Â This allows players to counterattack enemies and performÂ multipleÂ combos. Â While it takes some getting used to, the parry system is a huge reason for MGR’s take on the action game feeling very unique.

Another incredibly key feature of the game is Zandatsu, which involves cutting enemies and taking parts, energy, items, and information from the dismembered bodies of cyborgs and robots. Â This tactic can be pulled off using Blade Mode. Â It also helps Raiden regain any lost health and energy. 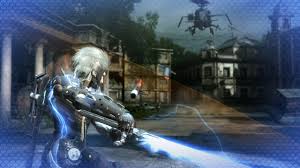 The player can also use reconnaissance using a visor. Â This allows the player to survey the area for enemy activity and proceed to the objective without alerting enemies. Â Raiden can also hide in a cardboard box to make sneaking easier. Â Having an enemy spot you triggers Alert Mode in which the player is attacked by multiple enemies for a limited amount of time. Â This is an incredibly interesting feature as it helps give MGR connection to the MGS series in a game that is otherwise very different.

After completing a missing, the player will be rewarded with a specific amount of points depending on the performance of the individual player and willÂ receiveÂ a grade with “S” being the highest. Â These points can be used to upgrade Raiden’s equipment as well as health and energy upgrades. 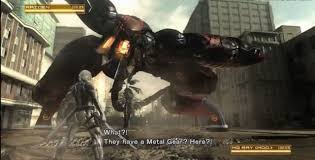 MGR is definitely not perfect and has a few issues. Â The camera is one of these issues as while it doesn’t hurt the game as much as you would think, it does have a tendency to hinder the player when multiple enemies are on screen. Â Another is that the game does not take that long to beat as the game can be beaten in five to seven hours. Â However, this does not include cutscenes are retries from when the player dies in the game. Â Also, since there is no block button, you have to rely on the parry system to get through the game, which does take some time to get used to.

Graphics-wise, MGR suffers from what I like to call “graphicalÂ schizophrenia” as the character models on both Raiden and the enemies he fights are incredibly detailed with good texture mapping and incredibly smooth animations while the environments are more basic looking and drab, which does make sense in context of the game but can be dull to look at.

The soundtrack complements the game and nothing more as while it is good for an action game, there is no piece of music in the game that can be called memorable. Â The sound effects are also solid as they successfully help make cutting up enemies all the more satisfying. Â Finally, the voice acting is competent with many of the voice actors rightfully hamming it up on some of the over the top dialogue. Â However, while he isÂ serviceableÂ for the most part, there are times where Quinton Flynn is unsure of what inflection to give Raiden.

Metal Gear Rising:Â VengeanceÂ is a very interesting take on the action game. Â While it is not perfect, it is still enjoyable and a refreshing take on the Metal Gear franchise. Â Platinum Games can be counted on toÂ deliverÂ a unique take on the action game and MGR is no exception. Â It is definitely worth at least a rental and if you are a huge Platinum games fan or a fan of Metal Gear, you’ve probably already bought the game and played through it multiple times as of this time. 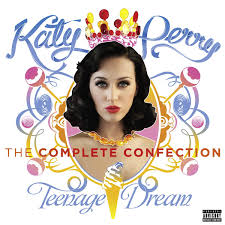